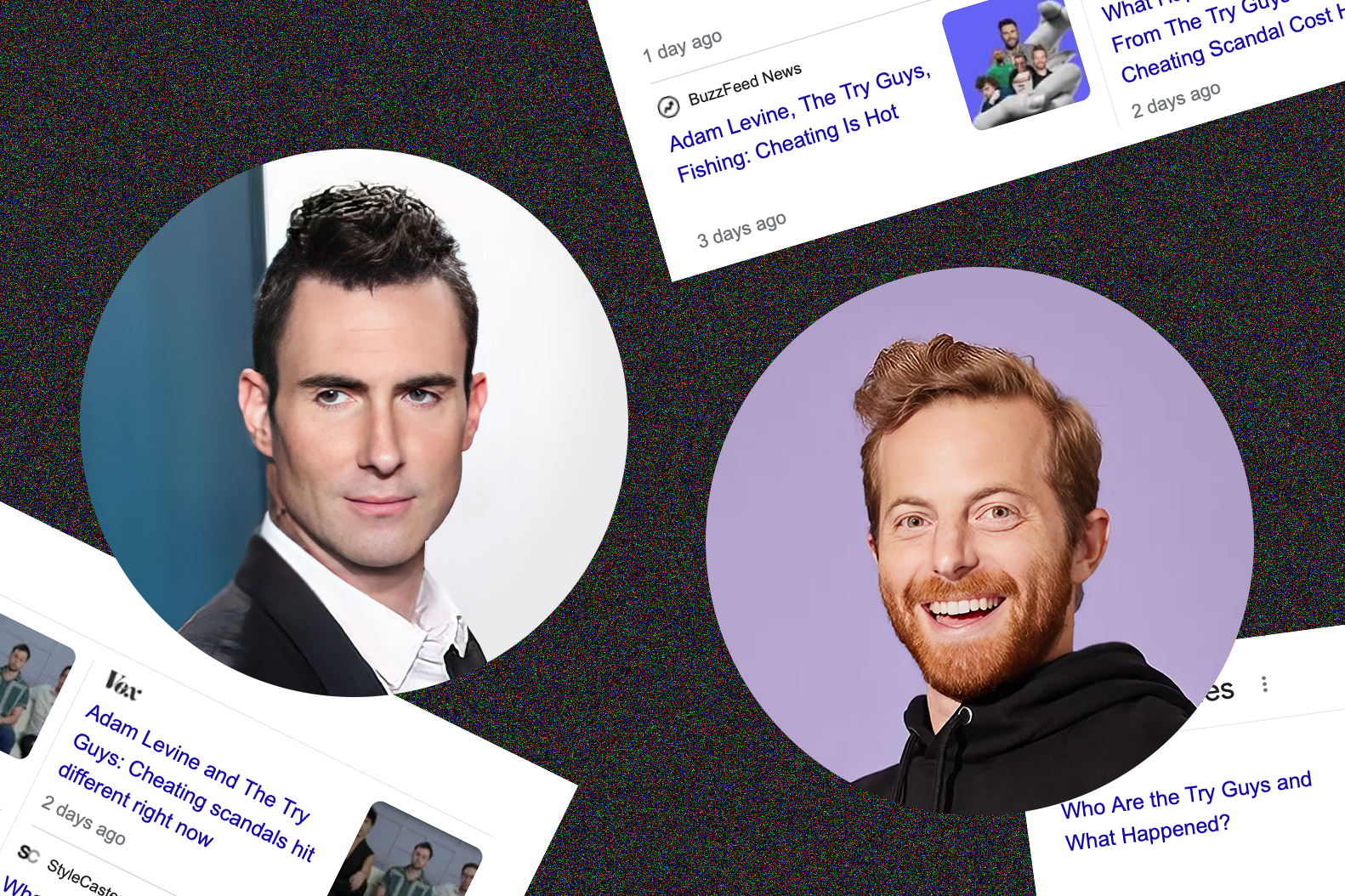 Adam Levine, then Ned Fulmer. What drives a person to cheat?

The news of Adam Levine (Maroon 5) and Ned Fulmer (The Try Guys) cheating on their wives is shocking, though unsurprising.

Just what can we learn from these disappointing revelations? Here are 4 things.

It’s about Adam Levine and the other Maroon 4 lying on the ground, next to a 10-year-old superfan with Down Syndrome, Christopher Warner, who was so overwhelmed at meeting his idol he had a panic attack.

Anyway, Maroon 5 laid down beside him until he felt better and they took a picture of that sweet moment.

I thought that was cool (and still do), but my fondness for the band actually goes further back than that. I still have my copy of their 2002 album Songs About Jane lying somewhere.

So it was beyond disappointing though perhaps not surprising — given the nature of their music (which I outgrew after 2010’s Hands All Over) – to learn last month that the 43-year-old had become embroiled in cheating accusations.

Levine had been accused of cheating by someone nearly half his age (Instagram model Sumner Stroh), all while his wife Behati Prinsloo was pregnant with their third child.

As shockingly revealed in his texts, Levine had even wanted to name the unborn child after his mistress. Other women have since stepped forward as well, alleging that Levine had sent them sexts. Yikes. Then you had the news about The Try Guys in the same week…

I liked the videos I saw of them, but I never consumed enough of their content to remember their names for the most part.

One of the things I did remember though — the guy who was always talking about his wife. That’s Ned Fulmer, who was accused of cheating on his wife, Ariel Fulmer, with an employee.

Troublingly, his persona, brand and fanbase were built around the idea that he was a wholesome family man and father of two who adored his wife.

It goes to show us that seeming like a “nice guy” doesn’t count for anything when it comes to integrity and faithfulness in marriage. Personally, I find the duplicity terrifying though unsurprising.

I mean, after Ravi Zacharias, I’m trusting no one, not even myself.

What drives a person to cheat and throw his or her whole life away? Is it the thrill? Or the belief that you can get away with it?

While I suspect the motivations are different for each person, I think there are a few things we can learn — as outlined here with 4 Is.

1. Identity has one focus

What really struck me was an element of callousness I perceived in Fulmer’s apology.

“Family should have always been my priority, but I lost focus and had a consensual workplace relationship. I’m sorry for any pain that my actions may have caused to the guys and the fans but most of all to Ariel. The only thing that matters right now is my marriage and my children, and that’s where I’m going to focus my attention.”

A loss in focus. For me, that doesn’t quite sum up the dual-identity, double life he lived by cheating.

Why do people cheat? Because in the heat of the moment, in the face of temptation, they forgot who they are.

Cheating is leading a double life. It involves leaving aside one’s identity as companion, husband or father and stepping into secrets and shadows.

Which is the true self at that point? It’s hard to say.

Reading the wording of his apology, I wonder if Fulmer has got it backwards.

He seems to be focusing on different things at different times. One focus led to a “consensual workplace relationship”, and his next one will hopefully mend the situation with his family.

The thing is, we are all human and prone to weakness. But when you know who you are, I believe you are less likely to lose yourself in a moment of passion.

As Christians, ideally, there should be one focus in the matter — who we are in God. Everything we do must stem out of this identity – children of God.

At the core of who we are, if Father God’s love is imprinted into our identity, it follows then that everything we do in our families, relationships, workplaces, churches and communities would be done in love for Him and fellow man.

When you don’t know your identity, you are wide open to insecurity, comparison with others and jealousy. You can find yourself in situations where you are beside yourself, wondering who you’ve become and how you could do something like this.

Having a firm sense of his identity is why Joseph did not cheat with Potiphar. In the heat of the moment, he knew his identity. He recalled how he was someone trusted by his earthly master, someone who belonged to God and served Him.

I believe Fulmer did not have this at his core; his identity was merely tied to the image and brand he created on YouTube.

2. Integrity is about imitating Christ

“Whoever walks in integrity walks securely, but he who makes his ways crooked will be found out.” (Proverbs 10:9 ESV)

Writing about BeReal last week gave me plenty of food for thought on what integrity is. Personally, I define it as who and how you are when the cameras aren’t rolling and no one’s looking.

Both Fulmer and Levine’s Instagram accounts are filled with wonderful, wholesome pictures of their families.

There is only one such picture that can inform how you live, however, and it’s called the image of Christ.

The problem with such pictures on social media is that they only serve to form an image; there’s always a narrative being put across there on some level.

It’s an image of your life or a vision of things as you want them to be, but such pictures never quite tell you how you should be.

Devote enough time and energy to this image (or brand, in Fulmer’s case), and you might even come to believe the lie yourself.

There is only one such picture that can inform how you live, however, and it’s called the image of Christ.

Integrity and identity are deeply intertwined, and our actions always circle back to who we are at our core.

Behind the BeReal hype: What does true authenticity mean?

I read this gem somewhere. It talked about the way this group of African villagers would discipline someone who had misbehaved.

The story goes that instead of condemning him for his wrongdoing, they would encircle the offender and tell him all the good things he had done or was known for, so as to remind him that he was not being himself and that he should return to choosing goodness.

Whenever we trade our integrity for the pleasures of a double life, it always comes back to having lost sight of who we are as children of God.

I watched the five-minute video where the other Try Guys tried to explain what happened.

You can tell it’s been heavily scripted by their HR and PR teams, but it’s still a pretty sad watch. The main thing that struck me was just how blindsided they all were by Ned. I mean, just look at Eugene’s death glare.

For how close they all seemed with each other in their shows, Ned never let any of the other guys into the hurting area or lack in his life that caused him to seek out an affair. So, who’s your African village? We need to surround ourselves with people who will journey with us, point us back to Christlikeness and ask us hard questions.

In my mentoring and A&C (accountability and covering) group with three other younger guys, we have forged an understanding that hard questions are to be asked of one another.

Asking intentional questions in a safe and judgement-free zone builds a culture of accountability, and also allows for healing in confession and prayer (James 5:16).

So find a group of brothers or sisters who you can trust. Give one another the authority to speak the kind truth into each other’s lives, so as to follow Christ’s example with our lives.

After Ravi Zacharias’ scandal, all I foolishly could think was: Even him.

On hindsight, it really shouldn’t have been a surprise. Even King David. Even Solomon. I don’t want to be the next even.

The simple truth is that everyone falls and has secret sins in our hearts, so we need to be aware of our triggers.

Why did David do what he did? It may have been a mix of procrastination and idleness.

Why did Solomon go against God’s command to have a thousand wives and concubines? Perhaps he was wise in his mind, but not fully obedient in his heart.

Everyone has something that can make them fall.

In the spirit of speaking the kind truth: What might your triggers be? Who has the authority and ability to watch out for you? What are your safeguards and failsafes?

People don’t cheat solely for the thrill of a sexual encounter. I believe many do so in an attempt to fill certain voids in their life.

I can’t speak for what those are in Ned Fulmer and Adam Levine’s lives, but at least I know what my voids might be.

I’m choosing to look to God for what I need there, while also installing safeguards and seeking out intentional brothers in those areas of my life.

I’ve written more than a few of these sorts of pieces now. Sadly, I know this one won’t be the last.

What I’ve learnt so far is that lust and adultery do not discriminate. Having power or position only seem to make unfaithfulness and abuse all the more likely.

As mankind is fallen, no one is exempt from sin — even the unthinkable ones.

Let’s stay humble and recognise that — even as we look to Christ and remember our identity as children of God who live to love Him and love our fellow brothers and sisters well.