So you want to get married

So you want to get married …

Are you crazy?! Why would you want to do that? Don’t you know how difficult marriage is?

Marriage has been on the decline worldwide. In the US, it is estimated that 40% to 50% of all marriages end in divorce. In the UK, cohabitation rates are increasing at alarming speed – it is the “fastest growing family type in the UK”.

SO WHY GET MARRIED?

Oh, yes … the drive. We feel the drive, don’t we? The physical and emotional need to be with another person. The desire to be close to someone, to share life with someone, to open up to someone, to have someone support you, listen to you, touch you, be with you.

So on the one hand, we want to be with someone, but on the other hand, look at the stats and the relationships around you — even those of our parents and relatives — and we can’t help but begin to doubt whether this thing called “marriage” is possible, let alone worth it.

In Asia, there’s also the social pressure to marry. If you are not married, then there’s something seriously “wrong” with you (don’t get me started on the pressure to have babies)!

Well … I guess you could work on your selection process.

First, put all your energy into finding the right one for marriage. We create this “checklist” to make sure that we filter out all the rotten apples and only look for the ones that are really juicy.

And so the list goes on. In fact, the older we get, the more extensively we have dated, the more “misses” we’ve had, the longer this list gets! We desire some form of safeguard that the person we marry will not disappoint.

But once we are happy with the person from a distance, we need to test out our relationship dynamics to see if we are really compatible physically, sexually, emotionally, spiritually and financially.

We’ve got to get an apartment, move in together, see if we can have synchronised laundry timings, eat the same food, and share the same taste in late-night television.

Finally when all that is done — then let’s get married! Because surely we’ve tested each other to death — and now we will never part! Right?

But if this were the case … then why are cohabitation “divorce” statistics at least as high as marriage ones?

People go out of their way in the “dating game” and habits like cohabitation because they are always afraid that the person they have selected to marry is not going to be the “right one”.

So you find someone who “fits” you at this present moment, and it seems that what they want in life is similar to what you want and so you get married.

We spend our whole lives looking for that perfect fit, and somehow we think that after such an exhaustive search, a ring on the finger will seal that person in that present state that you found them. The marriage ceremony becomes a sort of “preservation” ceremony.

CHANGE IS THE ONLY CONSTANT

Things change. That is the only constant in this world. Everything will change. Nothing stands still.

There are no safety nets against the winds of change.

Either we give up on marriage or we can approach marriage not by satisfying personal checklists, but by changing our mindsets. If we change the way we think about marriage before entering marriage (even before we start dating someone seriously), that could very well help us prepare for a married life that can handle the storms of change.

Mindset. Not safety net. Be ready for change.

But I want you to understand that the head of every man is Christ, the head of a wife is her husband, and the head of Christ is God. (1 Corinthians 11:3)

From the 1 Corinthians 11:3 passage, we can also see that Christ’s relationship with the Church is itself based on the much bigger and better relationship of Christ the Son and God the Father: A relationship that has existed within the Godhead (Trinity) for all eternity!

We imitate God not just on our own, but especially so when we form certain types of relationships with one another. The most pronounced of these relationships is the one between husband and wife.

All marriage has its roots and foundations in the divine nature — in the way God relates within the Trinity. And ultimately marriage becomes one of the greatest, or dare I say the greatest, ways of portraying who an invisible God is to the world.

John Piper once put it this way: Marriage is the doing of God, and ultimately, marriage is the display of God. It is designed by God to display His glory in a way that no other event or institution does.

Since God is three Persons in a loving relationship, then naturally humanity, being made in His image, would also consist of persons designed for relationship. Hence every person made in God’s image has “the drive”, as we mentioned earlier: The deep desire to be connected with other persons in a profound way.

It is no wonder then that Jesus is often called our Bridegroom (John 3:29).

The Father-Son relationship ultimately translates as our basis for the ideal husband-wife relationship.

This article is an edited excerpt from Dev Menon’s book, The Pattern: Discovering God’s Design for Marriage. It can be purchased here at the Graceworks Store. 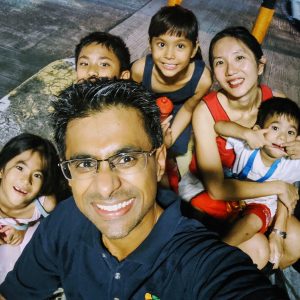 Pastor Dev is currently serving as a pastor in Zion Bishan Bible-Presbyterian Church. He has been ministering to young adults for the last few years in Singapore. Prior to that, he was working with tertiary students from around the world at All Souls Church, London.