Nicole Soh, a polytechnic mass communications student, and Jakin Tan, currently in National Service, are the two young minds behind Philotimo. Launched on 15 April 2020, the Instagram page was inspired by the Greek word “Philotimo” which means “the love of honour”. Nicole and Jakin share their hope and heart behind Philotimo, and their passion for creating safe and supportive communities online.

What is your experience like of being part of Philotimo and the process of creating it?

Nicole: I first met with Pastor Ian of 3:16 Church in October 2019. He had an idea and he needed a media person to help bring that idea into the online space. That’s where I came in.

We both thought that we should ask youths to also come in and be part of the process because they were the people we’re reaching out to. So Pastor Ian, my mum and I gathered some youths from our churches to sit in subsequent meetings.

Later on we came together with young “influencers” such as Samuel and Jesse who we felt were making a positive impact in their communities, to lend their voice on the platform and weigh-in on what Philotimo could do.

We wanted to get as many ideas as we could and it was quite cool to have so many people brainstorm different possibilities – with the highest attendance being 30 people in one meeting.

The demographic of the people in one meeting also created a good balance of perspectives, ranging from secondary schoolers all the way to tertiary students and even some adults.

But as a girl making content for guys, I knew I wouldn’t fully understand it, which is why I asked Jakin and his brother to help in the process. 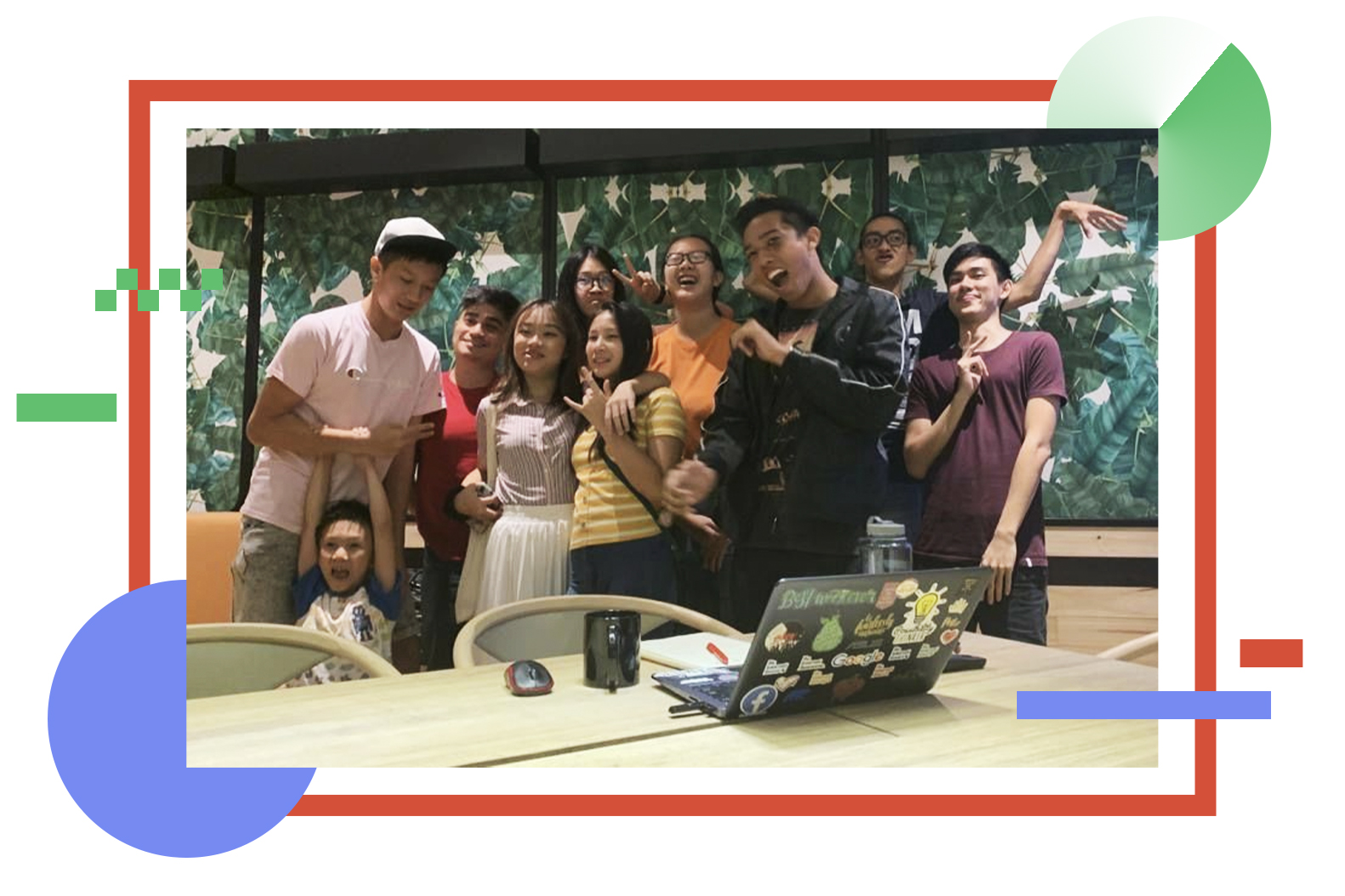 Jakin: At first, Nicole just asked me to be an influencer and I created some content for the page with my brother, Jesse.

But after a while, I thought of a few ways we could improve as a group in terms of how we work together.

I felt I could contribute more to some of the organisational matters, especially since the project was something I really believed in and felt was worth my time.

The concept of Philotimo was born out of a perceived lack of a place for Christian advice for guys.

I thought that there were several resources for the general Christian youth population, and also some specifically catered for the ladies. However, nothing really came up for me when I looked for content specific to guys.

When some of my friends saw the posts I made on Philotimo, they joked about it at first and teased me a bit about being an “influencer”.

But after they actually consumed the content, I could see they enjoyed it and I took that as positive feedback from them.

I see a lot of potential in this group to engage other young guys authentically through the content we make, which is why I decided I wanted to contribute more to the team.

Why is having a safe space online for guys so important to you?

Jakin: I feel that, within the church, not much is talked about guy issues. Maybe a sermon here and there about dating or National Service (NS), but not much about what it means to be masculine or about the big issue of sex.

For myself, I learnt a lot from my parents, but not everyone has the same opportunities to have such conversations with their own parents.

Which is why I feel it’s important to have that space and community online because if it’s not talked about at home or in the church, guys will turn to the internet.

One specific issue I think is not talked about a lot is toxic masculinity. Guys don’t have to try and be “cool”, have it all together or be superior to others. But in many churches I’ve been to, this is the culture I see where guys lack the space to be transparent and real to each other.

Being emotional often leads to mocking or sarcastic responses and it just causes feelings to get bottled up.

Trust doesn’t form easily. I feel like this is why guys need a space where they can learn to express their feelings without fear and to build true friendships.

If it’s not talked about at home or in the church, guys will turn to the internet.

In my own life, when I try to talk to other guys, I’m not really sure where I stand most of the time. It’s hard for me to tell whether they see me as a friend or whether they enjoy my company.

I feel this way because I think I’ll be judged for the things I say, because a lot of the things I do or say aren’t very typically masculine, in particular my sense of humour.

That is why it often feels safer to remain quiet, and why I sometimes find it difficult to connect with other guys.

To every guy who’s been told, “Guys shouldn’t cry”, this is for you

In fact, I think my guy friends feel similarly, in that it’s safer to be quiet rather than say something uncool or unmanly.

This creates an unspoken tension between guys because they struggle with living up to the image of being cool, especially if they don’t genuinely associate with that image.

Of course, I do have some guy friends who I’ve really managed to get close with after a very long time, and I find that as our interactions get more authentic, we’re able to share more of our feelings.

Even in moments when they can’t appreciate my jokes, it feels less awkward for me because I’m secure in knowing they still appreciate me as a friend and that they don’t judge me for not being that image of cool or masculine.

This is why we named the platform “Philotimo”, because it also means “the honour of self-sacrifice”. We want to encourage guys to live selflessly in love for everyone as Jesus would do.

I believe the true model of how guys should live is like Jesus, to use our strength and abilities for the benefit of others before ourselves, just as Jesus did. Nicole: I believe that guys, just as much as everyone else, need positive influences in their lives and positive role models to look up to because not many of them have that.

In secondary school, I saw a lot of guys getting into dark places. Physically, emotionally and mentally.

It made me think: Can’t there be anything better? Can’t there be spaces and help for them to have somewhere where they can feel safe and trust people?

We want to do this content to show guys out there that there is support for them.

Recent cases of sexual abuse or molestation have made me wonder, what do these guys talk about with their friends? Are they talking about things that bring women down? Are they having conversations about what’s right and wrong in the first place?

I think there aren’t enough conversations about such things among guys, so that’s why we also wanted Philotimo to provide conversation starters.

What does social media mean to you?

Nicole: I felt that there needed to be more positive spaces online because it can be quite a negative place, so I want to be somebody who changes that.

When I was in Primary 3, I discovered just how powerful media can be. My journey into media started out with curiosity, scrolling through videos I was interested in like Barbie videos.

One video led to another and it increasingly grew more intense and sexual in nature. My younger self didn’t understand what was going on, and I remember just wondering, what’s next?

Then I continued clicking the next video and then the next one… until it became a cycle. There’s a lot of pornography or sexual in nature content on Instagram and YouTube that usually stems from different fandoms, both visual and written. While I started from being curious, it developed to wanting to see more of that content.

Looking at these kinds of content was an on and off cycle, but I eventually chose to get out of it at Secondary 4.

I realised the content I consumed had morphed my views of relationships and friendships with guys, so I had to tell myself that this was not good for me and that I needed to stop.

My consumption of media made me believe that I have to be in a relationship to feel whole and that the main expression of love is always physical.

While what I consumed in the media was in the secret, it still had the influence to warp the way I viewed my relationships.

It goes back to media because that is where images are created and certain messages are sent to you, such as “love is physical” – when that’s not the full picture.

Why I stopped reading fanfic

After choosing to step back and stop looking at these kinds of content in Secondary 4, I began a journey and started seeking more of God.

Unlike physical hunger – where after you eat food you feel full –  you need to feed yourself with more of God to be even more hungry for God.

So I had to chase after God and intentionally make time to just talk to Him. I would read and believe that just as He’s done so many cool and supernatural things in other people’s lives, He can do it in mine too.

As I truly understood my identity as a daughter of God and realised that He has so much grace for me despite my past, I saw how God is the one true source who can totally fulfil the desires within me.

What do you hope Philotimo will achieve in the future?

Nicole: To have a big enough reach that people can recognise Philotimo as a Christian platform that is positive and spreads the truth with grace. I hope we can slowly work towards that.

Jakin: There are so many ideas we have for the future but later on, when we get bigger, I really want to organise events, like conferences and mass competitions for guys to have fun, learn and bond with each other!

Like what Nicole and Jakin are doing? Check out Philotimo’s page here and do them a solid by spreading the word about this new and evolving safe space.