As part of their ongoing work with the Generations Project, they developed several archetypes as an attempt to present the common mindsets they have towards faith and the Church.

As a Gen Z Christian, I was particularly intrigued by their survey findings regarding Gen Z archetypes and the problems they face regarding evangelism.

Naturally, the archetypes are not supposed to be fully representative of all Gen Z Christians in Singapore and are not mutually exclusive.

But the archetype that caught my attention was The Tip-toers because I related to it the most. Some things to know about Tip-toers: According to the quantitative survey* conducted by Graceworks, the Tip-toers are among the top three archetypes that Gen Z respondents identified with (together with The Tightrope Walkers and the Conservatives).

In fact, almost half of the respondents identified strongly with this archetype (Tip-toers), though the Tightrope Walkers are by far the most prevalent archetype.

I am indeed a Tip-toer who’s reluctant to share the gospel with my fellow Gen Z friends. Why? I’m probably afraid of rejection.

But first, what sort of negative perceptions do Gen Z non-Christians have?

3 NEGATIVE PERCEPTIONS OF THE CHURCH

Graceworks found that 77.6% of Gen Z respondents at least moderately identify with the idea that traditional evangelism is no longer effective for their generation, with 46.1% strongly identifying with the statement.

Personally, I second this notion, especially when it comes to things like street evangelism.

I can’t blame them; whenever strangers approach me in public, I avoid them like the plague and scurry off in the opposite direction just in case they are trying to sell me an insurance plan.

That’s probably how many non-Christians think of us when we try to evangelise in such a way – like targets in a transaction where we’re trying to hard-sell religion to them.

Just recently, I met up with a group of friends. One of them who is also Christian started talking about God.

The non-Christians in the group were shocked and asked him: “Huh? You Christian meh?!” As though that fact was so appalling. Big oof.

Although the comment wasn’t directed at me, I felt the second-hand embarrassment so strongly I wanted to spontaneously combust out of shame. I wasn’t ashamed of my faith, rather I was ashamed of how sometimes Christians (myself included) can at times be such poor testimonies of Christ.

Even non-Christians who don’t know God hold us Christians to a higher moral standard!

So when we talk about repentance and holy living, but don’t actually practise what we preach, it really doesn’t reflect well on our faith. It’s sad that this prejudice is sometimes true.

It seems that the Church’s strong public stance on social issues such as LGBTQ+ and abortion, which are hot topics among the “woke” Gen Z crowd, has also caused many to hold a negative view towards Christianity.

My peers have asked: “How can God be love?” I assume they ask that question because they’ve encountered Christians who were arrogant or condescending towards them.

The Church needs to pay attention to these 7 global shifts

Their view is that Christians are claiming the moral high ground and “policing” society by forcing our morals and values on them. As such, biblical positions can sometimes come across as rather unloving.

While Christians should continue to stand for what we believe in and not distort biblical truth just to make them more socially acceptable, the way we do it is sometimes not very kind or loving — that could be improved!

But for now, let’s switch gears and look at some other obstacles believers face when it comes to evangelism.

THE FEAR OF GETTING “CANCELLED”

Additionally, there’s the issue of a prevalent phenomenon among Gen Zs — cancel culture, or a social and professional boycott of someone or something deemed offensive or problematic.

Or, as one of my friends calls it, “cancer culture”. The way public condemnation and hate spreads like wildfire on social media nowadays makes people extra careful in self-policing what they say or post online. In a time when biblical truths are getting more unpopular, there have also been episodes of Christians getting “cancelled” and bashed by Gen Z over social media for making certain unpopular statements about their faith.

Even as I am writing this, the fear that I will be cancelled for something I say still lingers in the back of my mind.

Witnessing unwholesome experiences as a result of cancel culture can result in Christians, myself included, being much more hesitant to openly share about their faith with others.

Interestingly, Graceworks also brought up another point about how the “new tolerance” has become the norm for our generation.

According to D. A. Carson, “new tolerance essentially proposes that accepting someone’s position is akin to believing that their position is true, or at least as true as your own.”

As such, evangelistic statements of absolute truth like “Jesus is the only way to salvation” are often met with hostility and scoffing because accepting this view would seems to mean invalidating all other worldviews. “… that words may be given to me in opening my mouth boldly to proclaim the mystery of the gospel,” (Ephesians 6:19, ESV)

Whether it’s well-liked or not, however, it helps to remember that the gospel remains the truth.

The gospel is also naturally offensive to people (though we should not be offensive).

After all, it takes humility to recognise that we all have fallen short of God’s perfect standard, deserve the wages of our sin and thus need a Saviour.

So, we should not let our fears of being judged or cancelled by others stop us from sharing the gospel! After all, people took offence even with Jesus who was completely blameless.

We do not cherry-pick or water down biblical truths; the essence of the gospel must remain and we should bravely proclaim the truth.

Question is, how do we speak the truth in love? How do we share the gospel with our peers in a loving way that draws them close rather than repel them?

I think genuine human connection is very important to a lot of Gen Zs.

If we treat them as mere evangelism targets, our friendship will come across as agenda-driven. It’s really not a nice feeling when you feel that someone is befriending you because they want something other than your genuine friendship.

We can start by taking a leaf out of Jesus’ book: Even when He reached out to people, He met their practical needs first like healing the sick and feeding the hungry. He showed that He cared not just about their salvation but also about their welfare!

Let’s start nurturing sincere friendships with our non-believing friends and show them that we really do care about more than just their salvation.

Sharing the gospel is good, but being too up-in-your-face and preachy is the best way to turn people off.

As a pretty straightforward person, this was something I learnt the hard way because I could be rather tactless. It usually resulted in people getting more defensive and even more closed off to the gospel.

Sharing Christ in a winsome way: The 3 Ps of evangelism

Gen Zs like to feel heard, that their voices matter. So, being a good listener usually opens more doors for faith conversations. Instead of forcing our beliefs on others and trying too hard, let’s learn to allow for conversations to flow both ways.

So, nowadays, instead of jumping in with “oh, but the Bible says”, I’ve learned to just listen and to understand things from their perspective first.

When you are willing to listen to others, they will also be more open to listen to you. That’s when opportunities arise to bring the gospel to them in small and relatable bite-sized chunks that can make them think deeper.

“In the same way, let your light shine before others, that they may see your good deeds and glorify your Father in heaven.” (Matthew 5:16)

Ditching hypocrisy means practising what we preach so that our faith isn’t just empty talk to the world.

The way we live is a far more effective testimony than our words, so Gen Z believers need to be living testimonies to their friends by evidencing the fruit of the Spirit in our lives. God’s light must shine so brightly through us that it piques curiosity and invites conversation.

So, instead of being a “Tip-toer”, a hypothetical Gen Z archetype I’d rather fall under would be the “Fireflies”.

I want to glow with the fire of the Holy Spirit within me — to be a light that shines in the darkness, pointing people to Christ!

*The quantitative survey was designed primarily to validate the insights gleaned from their qualitative survey. It should not be interpreted or used independently apart from what had been documented about each trend. For access to the full report, you can get in touch with [email protected]

Graceworks is also inviting more Gen Zs (10–25 years old in 2022) to fill out their quantitative survey to help them improve the accuracy of their insights. You can participate in their study here!

Finally, if you’re older than our writer (not Gen Z), you can read a fellow Gen Y Christian’s reflection below.

Millennials and evangelism: A Gen Y response to the Generations study 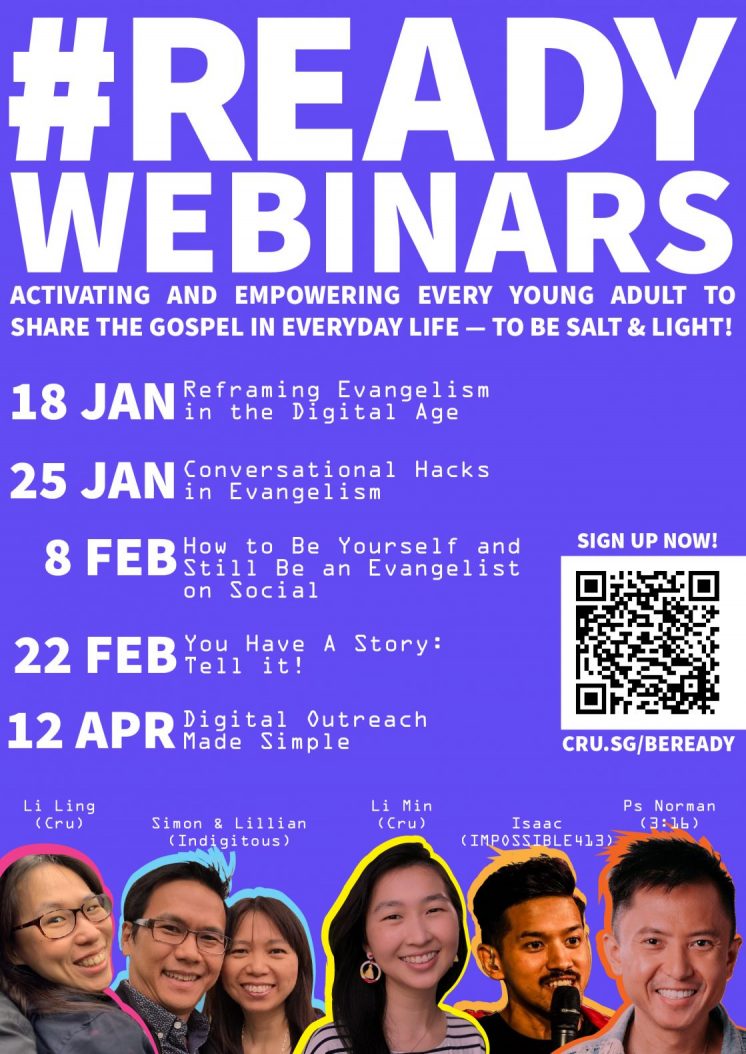