Speaking at the Samaritans of Singapore‘s (SOS) 50th anniversary conference, Mark Henick, CEO of Strategic Mental Health Solutions and a Top 50 TEDx speaker, shared his life story on how a stranger’s kindness saved his life.

The conference, titled Unifying Hope, Strengthening Communities, aims to deepen the conversations on suicide and its prevention by bringing together key leaders from various fields to share their expertise in tackling this global issue. As a kid, Henick was always told to “be a man”.

“Anytime I saw somebody cry, hurt or upset or even my first breakup… there were all these little hurts that I wanted to feel, but wasn’t allowed. Whenever I tried to express myself, I was shut down or told that it wasn’t okay.”

This led to accumulated pent-up emotions within him that one day exploded, triggered by a fight with his step-dad in the morning. That day, he had a class test, but his mind was in a state of blank.

The next thing he knew, he was drawing 10 different ways he could end his life on the margins of his test paper.

“That was the first time that I let all of these ideas and poison inside me come out,” he said. “Nobody knew about this. I had been taught all my years not to tell anybody about my vulnerability.”

Strong and silent: A dying breed of men

Henick was then sent to the hospital where his mom was informed about his suicidal thoughts. After speaking to about six different medical professionals, he had repeated the story so many times that he released some of the pressure built up inside of him.

“By the end, lo and behold I wasn’t suicidal anymore… I actually felt okay.”

Henick was prescribed some anti-depressants and life seemed to go back to normal. But the pressure built up once again over the next few months. It wasn’t that the medication wasn’t working; there just wasn’t any meaningful intervention. Over the next few years, the suicidal tendencies would happen over and over again. And each time it happened, the spiral deepened. Henick would frequently go in and out through the doors of the psychiatric ward.

“While the beginning, everyone seemed very concerned at my well-being, by one of the later admissions, the social worker said: ‘We are just going to leave Mark’s files open. He’s probably going to be back.’”

“I had become unaffectionately known as a frequent flyer,” Henick continued. “Someone who goes through the revolving doors so many times that they don’t even close the files.

“Someone with the more help they need, the less help they get.”

Henick had already felt like a burden to begin with, but now he felt like he was an extra burden because his family had to live with this crazy being for the rest of their lives. He wanted to spare them from that.

And that was how Henick found himself on a bridge, clinging on the telephone pole so that he wouldn’t fall by accident. His suicide wasn’t going to be an accident, he said. It was going to be his choice.

Henick’s mind had collapsed into such a tiny tunnel vision that the only thing that broke his focus was an unexpected interruption. A man in a light brown jacket had came behind him and said: “You don’t look so good there.” “He talked to me for a while, but not about my diagnosis,” Henick said. “He didn’t ask me about my medications or the doctors I’d seen. He wasn’t a mental health professional – I knew what they sounded like. In fact, he didn’t seem to care about any of that diagnostic stuff at all.

“Instead, he asked me about my pets, my interests, my family, my favourite subject. Gradually, I felt a relationship with this complete stranger and that loosened the collapsed state I was in.”

That was when Henick realised that the police had arrived. He hadn’t even noticed that they had blocked off both ends of the bridge and that there was a crowd forming.

Just then, somebody in the crowd shouted: “Jump, you coward!”

“In that pivotal moment, it didn’t matter that I had a stranger who took the time to get to know me. I had someone standing at the sidelines, driving my disconnection.

“When he said that, because I was so precariously balanced both literally and psychologically anyway, it tipped the balance. I let go of that railing and I immediately started to fall. I saw the ground and my only thought to myself was: ‘Finally.’”

“And then I saw the light brown jacket wrapped around my chest. The stranger had reached out to grab me and pulled me back.”

That was the start of a turning point for Henick. Nothing changed in his medication, but that would be the last time he tried to kill himself.

“I thought about the two men on the bridge that night. The stranger who was on the sidelines and the stranger who had my back. Who reached out to save my life. Who took the time to get to know me. And I realised I had the choice to choose who I want to be when I leave this place.”

Henick would go on to be a mental health advocate: His TEDx talk, “Why We Choose Suicide,” is among the most-watched TED talks in the world.

More than a decade later, Henick would also finally reunite with the stranger that saved him.

One of the first things Henick’s saviour said to him was: “I looked over on the bridge that night and it made me sick to look from your perspective.”

“He took the time to see the world from my perspective,” Henick concluded. “And that changed everything.”

Suicide is a serious worldwide health problem. Close to 800,000 people die by suicide every year. That translates to one person lost to suicide every 40 seconds.

In Singapore, there were nearly 400 reported suicides alone last year – 2.8 times more than transport accidents. Suicide is also the leading cause of death for those aged 10-29 years old.

While there is no rising trend of suicide rates in Singapore yet, SOS noted that they have been receiving more calls and emails seeking emotional support, many of whom are from young people.

In its 2018/2019 annual report, SOS reported that they had received emails from 2,568 clients, a significant 42 per cent increase from last year. Clients under the age of 30 contributed to 87 per cent of the increase.

They also disclosed that there are 25 attempted suicide cases for every death by suicide.

But the tide can be changed. 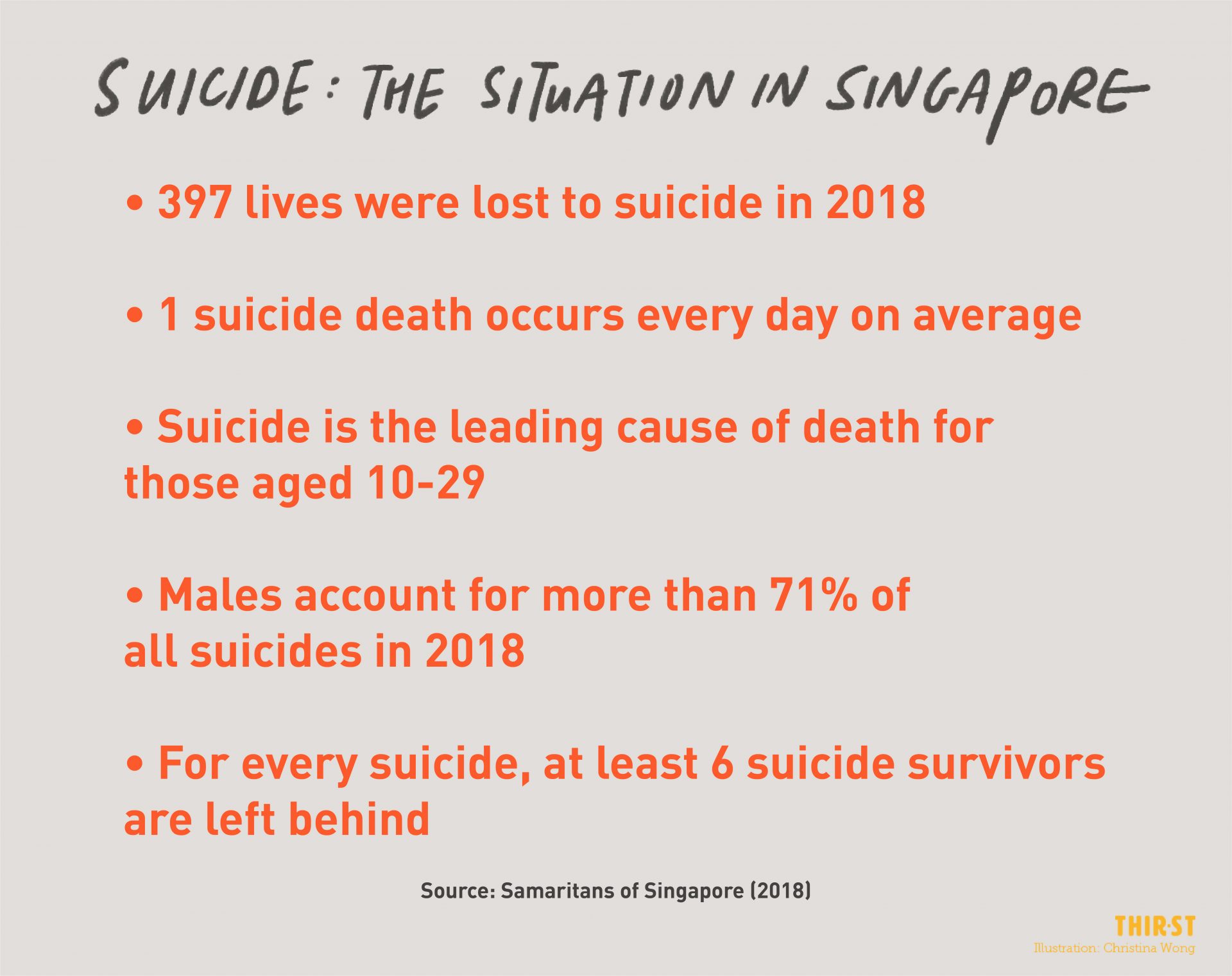 Addressing the importance of suicide prevention, Lawrence Wong, Minister for National Development and Guest of Honour for the conference, reiterated: “There is a growing body of research that suicide can be prevented.

“But suicide prevention has to be a national effort,” he continued. “We can do this by developing strong support networks across public, private, people sectors, leveraging on our own distinctive strengths and resources.”

Referring to the integrated motivational-volitional (IMV) model of suicidal behaviour, Associate Professor Mythily Subramaniam, Director of Institute of Mental Health’s Research Division, pointed out that there are three stages before a person commits suicide: pre-motivational, motivational and volitional.

Focusing on the motivational phase as that is where suicidal ideation is formed, Subramaniam highlighted that the lack of community support such as thwarted belongingness and stigmatising social attitudes towards mental illness is one of the motivational moderators that eggs someone on to take his own life.

“Thwarted belongingness means that a person does not feel like he belongs in this society. He feels alone and he feels like he’s a burden to the society, family and friends. He feels that it’s better for him to die.

“When that happens, belongingness start to look more like protective factors, not risk factors.”

Subramaniam also brought up Black Dog’s Systems Approach to Suicide Prevention in which they identified gatekeeping training as one of the key solutions to tackling this issue.

Gatekeepers refer to individuals in a community who come into proximity with community members as part of their usual routine. This can be a teacher, a peer or even a gaming partner.

Gatekeepers are extremely important because they are a powerful way of entering into communities that others may not have access to. By training these gatekeepers, they are then able to spot and identify persons at risk of suicide and refer them to appropriate treatment and supporting services.

Acknowledging the public’s hesitancy towards conversations on suicide, Subramaniam said: “We don’t step forward because we are scared. We don’t know how to start the conversations.

“But there is no perfect script for talking to someone about suicide. If you intervene, you can talk to them and you can make a difference.”

The worst thing the community can do is to create a bystander effect. Giving the audience three simple guides to help persons at risk, Subramaniam empowered the audience that they can “ACT”.

“We must stop reacting towards suicide,” she concluded. “We must start being proactive towards preventing it.”

And from Henick’s testimony, one person’s intervention can make all that difference.