You’re a woman of worth, no matter what the world tells you

Jennifer Heng has held various leadership positions in church, from youth pastor to Senior Pastor. She was also the volunteer Director of Dayspring New Life Centre, which aims to empower women and families going through with unsupported pregnancy. Coming from a troubled past herself, she went through several unhealthy relationships and two abortions before the age of 20.

But in a redemptive journey that she documents in her book, Walking Out Of Secret Shame, she discovered a ministry in walking alongside women who face the same difficulties as she did. Today she’s a stay-at-home mum and wife to a wonderful husband. She shares with us on how her life went from one of hopelessness to grace-filled empowerment.

What do you think are some common struggles that young women face?

The root issue of a lot of the challenges women face is when we don’t see our value. We don’t see truly the value of our lives, of how we are made, and coming to terms to accepting that whoever we are is so precious beyond words.

When people – both men and women – don’t have an idea of their value, they will constantly feel that they are not good enough, and this can be manifest in very explicit ways, such as abusive relationships and abusive behaviour. Or it can manifest in insidious behaviour that people wouldn’t immediately realise is bad, like being overly-driven, consumed by success. Like I have to prove that I’m worth it.

So I’m very concerned about young people who don’t recognise the need to love themselves. Maybe no one taught them. Or they’ve never been shown why its important.

I felt like this growing up. Why bother being good since I’m so bad already? So should I treat myself well?

One of the questions women often they ask me is, “I want to hear God, I want to see God.” And I always tell them: Start by looking in the mirror.

It was very weird. An outsider would have asked, what’s wrong with this woman? But when I was in it, I would have sincerely told you that I was okay. That he only beats me up 5% of the time, and it’s okay because 95% of the time he treats me really well. I always told people, you don’t see him when he’s treating me well. You only see the bad parts. So I know more than you, I know better.

I felt like I only deserved 95% love, and not 100%, because that’s all I deserved. I’m a bad person. I’ve done bad things. I don’t deserve better. You just make do with 2nd, 3rd, 4th, 5th best. And the cycle perpetuates. As you grow older, it gets worse.

How did you manage to find healing from that?

In the end, the only way out was I was healed by God. Everything hinged on that. There was no way I could have overcome that cycle on my own. I didn’t see the hope in change.

If you read Matthew 22:39 – “Love your neighbour as yourself” – it suggests that we can only love to the degree we love ourselves. If you look at Jesus, did he love himself? He put himself through the most horrible torture; that doesn’t sound like the act of someone who loves himself! I mean, from the world’s point of view, if He really loves Himself then He should stay in heaven!

But the only way Jesus could love others the way He did was because of the love he had for himself, through his Father. That’s how He could selflessly give Himself away.

Did you have any hurts or past experiences that deterred you from pursuing your dreams?

I think all of us have been unwittingly deterred from pursuing our dreams by significant people in our lives. These may not necessarily be parents; for Christians, it could be your leaders in Church, your pastors.

I remember once when I was about to plant a new church, when a line that another pastor said years ago came back to me: “Jenn, you will never be Senior Pastor material.”

It was just that one sentence out of a whole long conversation. I don’t think he meant it in a malicious way. I think he was helping me to manage my expectations or to be realistic. And it stuck with me for many many years.

I was defeated, even before I tried. 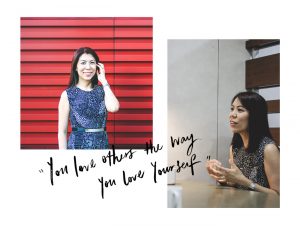 Another time, I became a youth pastor. I had no experience, I was unprepared, I was thrown into the role. I was the only woman in the team, leading 10 male staff.

I really, really struggled with leading that team. Some of them were men who were more experienced and they struggled reporting to a female boss. So I struggled, I spent a year feeling very depressed.

Then I spoke to one of my mentors, an older lady, whom I believe truly loves me and means well for me. She told me: “Jenn, in order to lead men, you’ve got to act like a man.”

And that really impacted me in a negative way. I got a shock. I said, why do I have to act like a man? I am a woman. Why can’t I lead men as a woman? There are strengths and abilities that a woman will have that are different from men.

The root issue of a lot of the challenges women face is when we don’t see our value.

I really struggled. For a few months I asked, “You mean I have to be like a man to be a good leader?” And I tried to change. Like, what would a man do? What would a man say?

But after a few months, I gave up. I came back to being myself. And along the way, half of the staff left and I managed to get in some new staff. We went through a bit of the shaking and then it stabilised. It was now a team of 7 and it became a very, very strong team.

So it wasn’t so much if I was a man or a woman. But rather, as a leader, I have to be confident in who I am. And it’s important to have your own team around you.

If anyone tells you that in order to lead men, you’ve got to act like a man, I really, really disagree. And as I get older, as I get more confident in my femininity, I have no qualms about being a woman. That means being more emotional, more in touch with my feelings, having strong gut feelings.

What message do you have for young women today?

If any women are stuck in this rut of low self-esteem, I want to tell you that you are really, really precious. I hope you will look at yourself in the mirror and find a way to believe that you are. Even in small ways, it’s okay. It’s okay to say I’ve got really nice eyes, or I’m really good at sports, or I have a big heart for animals. Small ways to appreciate yourself.

And cut yourself some slack. Don’t be too hard on yourself! I think our society is so pressurising that sometimes we tend to be hard on ourselves.

A lot of young people tell me they want to do good things, which is good. They want to help this person, help start out that social enterprise, and it’s great. But I always have this concern that some of them are still struggling with loving themselves. We have to recognise that you’re not going to be able to just cover up that void. We think, if I try to help others then I’ll be okay – but actually it works the other way. It’s inside-out.

I want young people to see that everyone of us has a responsibility and ability to make a difference in our world. It’s not just “I want” and “I’m passionate”. Because a lot of people still feel like they can’t. So it’s also the “I can” and “I will”. I want people to look at me and say, “This person didn’t just say ‘I wanted’. She believed she could, and she did.” That’s my hope for all young people. Don’t feel disempowered. When you say you can’t, you disempower yourself.

You start from where you are, and you pour out according to what you have. And when you love yourself, when you say “I can” and “I will”, you’re empowered to love others and make that difference.