What hope remains when your life is turned upside down?

There they shared personal stories from their community along with reflections on Bible verses that spoke to them.

I was able to speak with JR community members Jasmin Ong and Francesca Koh, both of whom had shared their life stories as part of the series.

Jasmine experienced God’s healing amidst her struggle with alopecia, while Francesca found deep assurance in God’s promises for her and her son who was born with a rare genetic disorder.

After listening to them testify about how God’s word spoke deeply to their lives, I was seriously inspired to treasure God’s word in my heart and comforted that God is working even in the lowest point of our lives.

Amidst the flurry of changes our “new normal” has brought, perhaps, like me, you’ve also begun to lose sight of the comfort God’s word brings. If so, may these stories bring you new hope and joy in keeping God’s word close to your heart.

JESUS IS CLOSE TO THE BROKENHEARTED

Jasmin, a 39-year-old real estate salesperson, was diagnosed with alopecia areata in 2019.

Alopecia is an autoimmune disorder that causes hair loss. No cure currently exists, though there is treatment available for the condition.

That same year, Jasmin also faced challenges in her relationship which eventually led her to fall into a deep depression.

For months on end, Jasmin felt hopeless and even experienced thoughts of suicide.

At first, she would still go for her doctor’s appointments to receive treatment through monthly injections.

But as her depression got worse, Jasmin lost the motivation to go and stopped receiving treatment altogether. She would even fear taking showers because her hair would just “fall off” in the shower.

The 39-year-old shared: “While in that crushed and depressed state, I remember I would cry every day and night. I was very isolated. I would only talk to my family and a few other friends.”

Jasmin became someone who rarely left her house — a drastic change from her usual outgoing nature.

After Jasmin spent months in isolation, a past conversation with her friend Edwin suddenly came to mind.

Edwin had previously shared with her about going through a similar experience before.

So Jasmin reached out to Edwin through a phone call.

And ever since that call, Edwin and his wife Rachel would visit Jasmin to sit with her in her struggles.

Living with pain that doesn’t go away

Although Jasmin did not believe in Christ at the time, she came to see hope through what Edwin and Rachel shared with her.

“I saw in them what Christ had done for their lives so I decided to believe in Jesus too,” she said.

A few months before the circuit breaker started in 2020, Jasmin agreed to follow Rachel and Edwin to church.

“I felt that it was an immediate acceptance of Jesus for me because it felt like there was really nothing else that can help me,” reflected Jasmin. “So I decided I might as well give it a try.

“After accepting Him as my Lord and savior, I really went all out to learn more and commit myself more.”

Even though the circuit breaker prevented her from attending physical service, Jasmin continued to watch online sermons and would read the Bible daily. She would also pray for healing over herself every day.

“Even when I shower, I would pray and declare that I’m healed,” she recalled.

“The Lord is close to the brokenhearted and saves those who are crushed in spirit.”

A month after Jasmin had accepted Christ into her life, she began to realise that less hair had been falling.

After checking thoroughly, Jasmin confirmed that the previously infected patches on her scalp had now begun to grow new hair.

This was a miracle because she had stopped taking treatment for a few months, and the bald patches had showed no signs of healing.

“When I first realised that no new patches were forming and my hair was growing again, I knew that it really could have only been God’s glorious work,” she shared.

“I really think it was Him and nothing else. I never even went for treatment anymore, so it couldn’t have been anything else.”

4 tips to carry you through the healing process

Ever since she started trusting in God, Psalms 34:18 was a verse she came across over and over again especially on social media.

It led her to read more of the Psalms in the Bible, where she found it was full of God’s promises. Psalms 34:18 remained a special verse to Jasmin: “The Lord is close to the brokenhearted and saves those who are crushed in spirit.”

When asked why that verse was so special to her, Jasmin shared: “I could really feel how close God was to me at that time when I was completely broken and crying out to Him.

“It is thanks to Jesus that I can say that everything about me today is fully recovered, restored and made even better.”

JESUS WILL MAKE OUR PATHS STRAIGHT

When Francesca Koh first got married, she looked forward to having family outings like going to the zoo on weekends or cycling in the park together.

But after their first child, Isaac, was born, even simple outings like eating in restaurants proved challenging.

In 2017, Isaac was diagnosed with a rare genetic disorder known as GM3 synthase deficiency.

The disorder is caused by a mutation of a gene that tells the body to make an enzyme important for brain development and function, which thus leads the brain to develop abnormally.

For Isaac, the disorder meant that he was slower in developing basic skills such as feeding himself and walking. Francesca and her husband first noticed this when Isaac wasn’t achieving his milestones as an infant.

At six months old, Isaac was still not able to flip from his back to belly, a milestone normally achieved at four months old.

Even though Francesca thought it might simply have been a delay, Isaac’s doctor had suggested the couple send him to be tested.

From blood tests to a spinal puncture, all of Isaac’s tests came back normal. Yet Isaac still did not show signs of achieving his milestones.

Eventually, Francesca was referred to a doctor specialising in genetics who managed to detect that something was indeed wrong with Isaac’s development.

Upon hearing the news, Francesca was in total shock: “I couldn’t process the information. I asked the doctor whether that means Isaac can’t go to school.

“I still remember that the doctor told me that I should manage my expectations.”

At that time, Isaac was the first known case in Singapore to be diagnosed with GM3 synthase deficiency.

As such, Francesca shared that there wasn’t much help available. At eight months old, Isaac was sent to physiotherapy sessions once a month at KK Women’s and Children’s Hospital (KKH).

And after two years, there didn’t seem to be much progress in Isaac’s development.

At the end of the day, when God asks us what we have done, we’ll have something to answer Him. I just hope to take care of Isaac until God calls him home.

Then in 2019, she chanced upon Rare Disorder Society Singapore (RDSS).

Through the RDSS community Facebook page, Francesca learned there was a highly recommended private physiotherapist.

“Since we didn’t see much progress in doing physiotherapy once a month my husband and I decided to give the recommended physiotherapist a shot,” noted Francesca.

Currently, Francesca shared that she can pay up to $4,000 every month on Isaac’s therapy alone. But the joy of seeing Isaac develop and grow well makes it “all worth it”.

In the first 15 days of intensive physiotherapy at the new clinic, where Isaac underwent 3 hour sessions each day, Isaac was finally able to flip from his back to belly.

By the third month of therapy, Isaac was able to crawl and soon was even able to walk! As much as Francesca is grateful for the progress shown, she admits that she still fears what the future may hold for her and her family.

But there were verses that kept her hopeful in Proverbs 3:5-6.

“Trust in the Lord with all your heart and lean not on your own understanding; in all your ways submit to him, and he will make your paths straight.”

“Of course I was envious of normal families. I thought Isaac would just be on his back forever,” she admitted. “But when I read Proverbs 3:5-6, it really hit me. I realised that all I have to do is wait.”

Francesca reflected that though her path may be “long and windy’ to walk through right now, there may yet be a “prize” at the end of the day in God. She is continuing to believe and trust that her family’s journey will lead to somewhere good.

“There’s a lot of things I can’t understand. Like I still wonder, why me?” she admitted. “But I learnt to take it one day at a time and to take care of Isaac.

“At the end of the day, when God asks us what we have done, we’ll have something to answer Him. I just hope to take care of Isaac until God calls him home.” 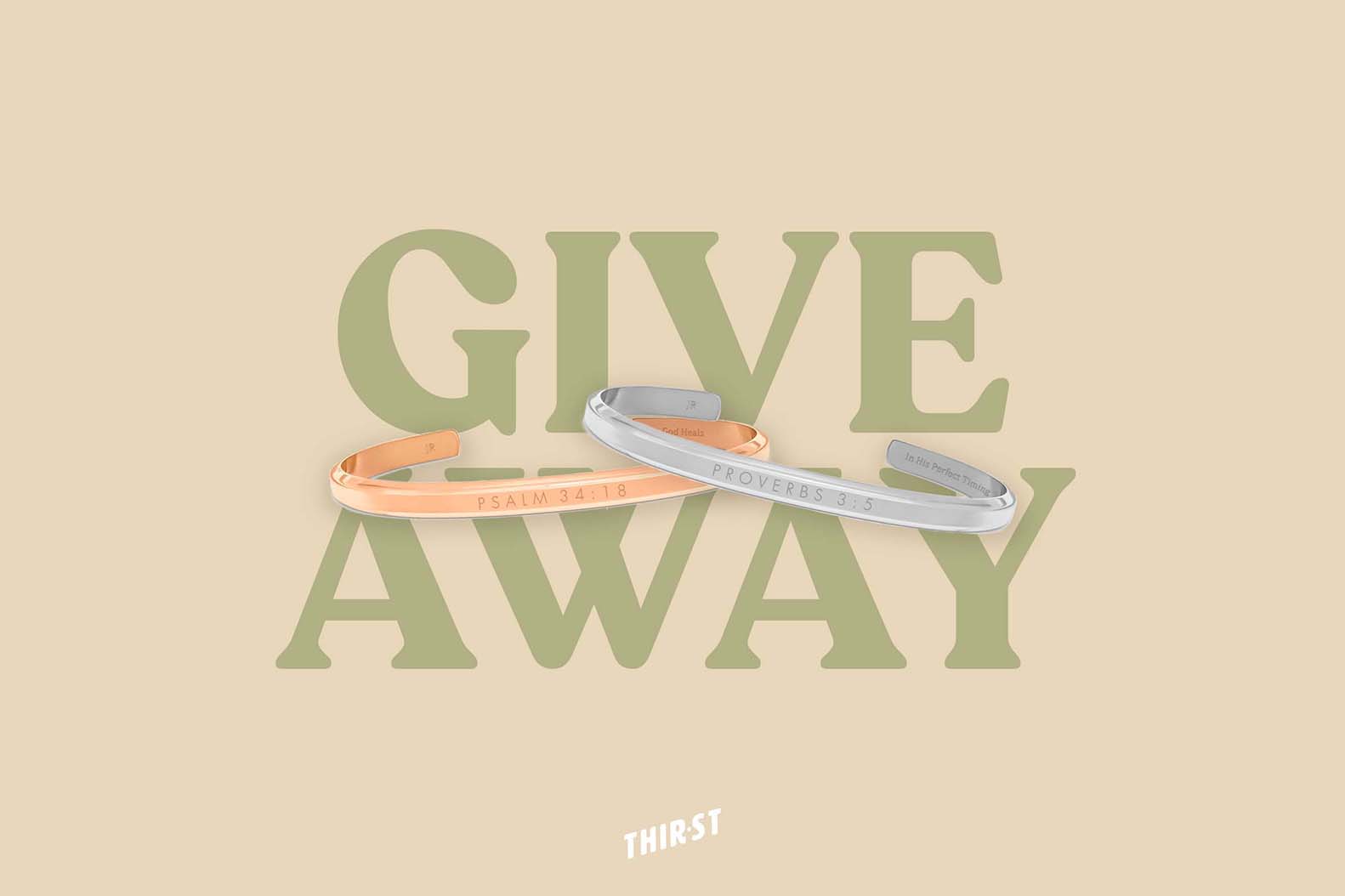 GIVEAWAY: We have collaborated with Jacob Rachel to give away 5 x Psalm 34:18 cuffs and 5 x Proverbs 3:5 cuffs to 10 winners. Winners can select between Silver/Rose Gold or Petite/Standard size for the cuffs.

To stand a chance at winning, subscribe to our Telegram channel and in our pinned giveaway post there, share your life verse with us and the story behind it. Winners will be contacted privately!