Jeremy Tan, 46, works full-time at The Hiding Place, a halfway home for ex-drug addicts. He first entered as a recovering addict in 2010, and is now a member of the staff there, helping wayward youths go clean. He sat down with Thir.st to share his life story – from gang fights to loanshark running, to the day his mother died when he was serving time in a Thai prison for drug trafficking.

From Primary 1 to Primary 6, I failed everything. I failed my PSLE, so I dropped out of school. I started smoking cigarettes, sniffing glue and got involved in a secret society.

In 1988, I got started on heroin. Even now I can remember that first puff.

My friend introduced it to me: Eh Jeremy, try heroin. So, I just thought, why not, no harm mah. That first puff of heroin gave me 22 years of bondages. All the way until 2010.

And in that 22 years, I wasn’t enjoying life – I was in bondage. That first puff caused me to steal, borrow, commit crimes, even sell drugs. Just to support my drug habit. If you ask me now, as an ex-drug addict, I will say that I didn’t have any dignity at all in those days. A drug addict would never have any pride, you steal whatever you can – even from your loved ones.

You steal from friends, it’s bad enough… but imagine stealing from your own family.

My father had passed away, so my mother raised three kids alone. She kept her money in the house – under her pillow, in her closet. I would find it and just take it.

Sometimes she would break down and cry. Sometimes, even now when I think about it, it pains my heart. She would cry. This money was meant to buy food for the family, and you go and steal it. And many times I did this, uncountable times, I really broke her heart.

My brothers would say, why do you always help him, again and again? He’s going into prison and out, and when he’s out he repeats it again. In Cantonese, she would tell them, “pity him lah”. She always sided with me.

She never give up hope on me. I really broke my mum’s heart.

In 1999, when I was 30, in a prison in Thailand for trafficking drugs, my mother passed away. My cousin told me that before she passed away, she said: “I hope that Jeremy” – she called me Ah Mee – “I hope Ah Mee will not take drugs again. That he will turn back to God.”

I was raised a Roman Catholic. Every night, my cousin said, my mum prayed without fail, praying that I’ll turn back to God.

I didn’t get to see my mum for one last time before she died because I was in prison. 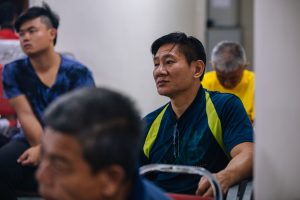 I was in prison a lot. In and out. My longest jail term was for 6 years. In 2005, I came out from prison, and I tried to do something else. I tried to sell prawn noodles. But in 2007, a friend introduced me to Ice. I was clean from drugs at that time. I pushed him away, I said I don’t want to become addicted like with heroin.

But finally I took one puff … and smoked Ice all the way until 2010. Three years, on Ice mixed with heroin, ganja (marijuana). A cocktail of drugs.

I needed money again, so I went to work for a loan shark. Splashing paint on houses.

I got worse and worse. But my cousin would keep telling me, Jeremy, turn back to God. Go to a halfway house.

One night in 2010, I couldn’t take it any more. I was in a room, doing drugs. My mind was so affected by the long use of drugs. I’d been hearing voices, seeing visions. When I spoke to people, suddenly their face would just become very demonic. I could see little devils running here, running there.

Also, I hadn’t been sleeping for days. When you smoke Ice, you can go without sleep for 5 days. For years, all of this was slowly accumulating, accumulating.

I just called out to God. “God, help me.” And He did. That very night, I was caught by the police again. God knows how desperate I was at that time.

But He heard my prayers. When I was caught, the police did not make me take a urine test. They should have – I had a drug history. But they just took my statement, and I was only charged for trespassing, for my loanshark running. I was sentenced to 10 months in jail, much less than if I had been caught for drugs.

In the last two weeks of my prison sentence, I went for the Chapel Service in prison. I told them I wanted to go to a halfway home when released.

On my release, I went to The Hiding Place. I chose to come. My mind was still mentally affected by coming off drugs. I couldn’t think properly. I couldn’t exercise. I couldn’t even read. So I was very down, hopeless. I was nothing. I was like the lame beggar in Acts 3.

My life was like that – I was crippled by many things. Crippled by drug bondages, crippled in my gangster mentally, wanting my own way. Physically my body was very crippled. The drugs that I took affected my body very badly.

It took me almost two years to completely recover my mind. Most of the staff, when I came to The Hiding Place, they said, Jeremy is like a zombie. 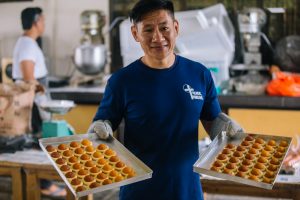 So I tried praying. Not any kind of flowery prayer – my mind wasn’t working well. I just told God, I want to change. I kept trying to read the Bible. Every day I joined the worship. I persevered, even tried my best to exercise, rebuild my body.

And slowly God began to heal me. I look back today I say, wow, you know God, you are so real. To me, it’s a miracle. A miracle I am no longer a drug addict today. I think back and it’s a big miracle for me.

God is my greatest fear. I’m scared of going back to those sad days. Full of despair and shame. I don’t want to go back down that road.

Only God can change you.

Jeremy Tan works at The Hiding Place, a home for the rehabilitation of drug addicts, ex-prisoners, alcoholics, gambling addicts, homeless orphans, inhalant abusers, wayward teens, young offenders, troubled youths and those in need of help. His story has also been featured on the Celebration of Hope Facebook page.

Have you been searching for hope or are you looking for opportunities to share your hope with family and friends? Come and hear stories of hope at the Celebration of Hope, running from May 17 to 19, 2019 at the National Stadium. Tickets for some of the rallies are still available. Book them via the Celebration of Hope app or website before they’re all snapped up!