We’ve all heard stories about amazing women – but how often do we hear these stories from the mouths of men?

Thir.st went behind the scenes with five such women who have incredible stories of overcoming, leading and redefining stereotypes. There we found five great guys – friends, husbands, brothers and sons – who’ve stood by them, quietly supporting them through the years. You’ll hear from three of them in the video below.

Instead of having the women talk about themselves, we let them stay backstage for once and got the men to do the talking. Among the dashing dudes, we had: 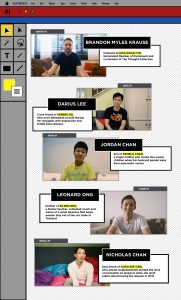 Speaking about women who usually speak for themselves was a strange new experience for these men.

“I hope I get the facts right, or she will probably call me to ask if we are even friends,” Darius joked, slightly nervous. He met

Serene at a talk he was giving back in 2014. They have since been working together on a number of social justice issues, such as defending the sanctity of human life. They make a great team: She writes letters to forum pages; as a lawyer, he vets.

But the initial nervousness was short-lived. Everyone knew the stories of their inspiring woman well, if not by heart. As our men started to become more comfortable, the pride they felt for the woman in their lives was palpable. Each man shared confidently about the formidable challenges each woman had to overcome to become who she is today.

“When Seets decided to talk about her condition on Facebook, I thought she was so brave,” Nicholas shared. “But she’s the kind of person who will put herself out there so that more people can be helped in the process, even if it’s scary.”

See Ting’s post that reached out to fellow sufferers of alopecia, an autoimmune disease that causes partial or total hair loss, went viral overnight in 2015. The pair have been best friends for many years and even found work in the same field of social development.

Hearing words of affirmation from family members, especially the males, is agreeably out of the ordinary in most Asian households.

Among these stories, bravery was a common thread. Leonard’s eyes gleamed with excitement as he spoke of his elder sister, Eileen, who cut short a promising and successful teaching career to set up a gift-making business in Thailand to help young women out of the sex trade and find gainful employment.

“I was so proud that she had the courage to do something like that,” he said, smiling widely. “My sister is so cool!” This was funny and heartwarming to hear – coming from the national windsurfer who represented Singapore at the Rio Olympics last year.

Hearing words of affirmation from family members, especially the males, is agreeably out of the ordinary in most Asian households. When our women were invited back into the room so that the men could tell them what they loved most about them, both parties were noticeably tense and – for lack of better word – paiseh.

“This is so strange!” exclaimed Shiao-Yin, bursting into giggles as Brandon expressed how her compassion for others inspires him. “He never says these things to me!” The Nominated Member of Parliament, known for her rousing speeches during Parliamentary sittings, could barely contain her amusement at her husband’s rousing speech of his own.

For some, tears were an unspoken response to the rarely articulated thoughts and emotions. Others couldn’t help but reach for a hug. Jordan, who was only 9 when his dad passed away, thanked his mother Pamela for playing both parental roles with grace and strength.

“Mum used to be a tomboy when she was young – maybe that’s why she could be a dad too.” Hearing this, Pamela’s face filled with emotion. Mother and son shared a warm embrace.

On March 8, as the world celebrates International Women’s Day, join the movement and tell the women close to you how much you appreciate them. Because every woman is amazing, but not every woman knows that.