Love is the greatest thing in the world. Love is the very purpose of our lives. And what the Holy Spirit does and brings to our lives is all about love.

“Don’t get drunk with wine, which leads to debauchery, but be filled with the Holy Spirit.” (Ephesians 5:18)

It’s the only kind of intoxication that doesn’t leave you with a hangover afterwards!

And Paul says this is something that you can go on doing. It’s not a one-off experience – you can go on being filled with the Spirit over and over again.

In the book of Acts, there are five different categories of people when it comes to encountering the Holy Spirit.

HOW CAN WE BE FILLED?

On the Day of Pentecost there was a group of people who were longing to be filled with the Holy Spirit. They had been praying, and then tongues of fire came upon them.

“All of them” were filled with the Holy Spirit and began to speak in other tongues as the Spirit enabled them. All of them. No one missed out!

Then there were those who were receptive like the Samaritans in Acts 8.

“When the apostles in Jerusalem heard that Samaria had accepted the word of God, they sent Peter and John to them.

When they arrived, they prayed for them that they might receive the Holy Spirit, because the Holy Spirit had not yet come on any of them; they had simply been baptised into the name of the Lord Jesus.

Then Peter and John placed their hands on them, and they received the Holy Spirit.” (Acts 8:14–17)

If you’re open, you can receive the Holy Spirit today.

No one in history has been more hostile than the apostle Paul, who was formerly known as Saul.

Saul participated in the marytrdom of Stephen, the first person to be killed for Christ. Thereafter Saul persecuted Christians mercilessly until he encountered Jesus on the road to Damascus. Jesus’ appearance was like a blinding light – so bright that Saul went blind.

Then Ananias, who had earlier been instructed by God to seek out Saul, prayed for him. Saul’s eyes were healed and he became filled with the Holy Spirit.

Once completely hostile to Christ, Saul immediately began preaching: “Jesus is the Son of God!” (Acts 9:17-20)

Maybe you’ve been around Christian circles for a bit, were baptised as a baby, were confirmed or even go quite regularly to church – but have never heard all this stuff about the Holy Spirit.

Then when he laid his hands on them to pray, “the Holy Spirit came on them, and they spoke in tongues and prophesied” (Acts 19:1-6).

Perhaps you’re thinking: “This would never happen to me” or I’m not the religious type”.

The ancient world was divided into two groups: the religious (Jews) and those who were not religious (Gentiles). In Acts 10, we read of the first occasion when a group of Gentiles was filled with the Holy Spirit.

This was shocking because all the first Christians were Jews. They didn’t think it was possible to be a Christian unless you became a Jew first. So they didn’t believe that someone who was not religious could be filled with the Holy Spirit.

But then God gave a vision to a Roman centurion named Cornelius – a Gentile – as well a vision to the apostle Peter, such that their paths would cross. Peter came to Cornelius’ house where many Gentiles were gathered, and told them about Jesus, the cross and the resurrection.

And then “the Holy Spirit came on all who heard the message” and the Gentiles spoke in tongues and praised God (Acts 10:44-46).

WHAT HAPPENS WHEN WE’RE FILLED?

1. We experience the love of God

When God’s love was poured into the hearts by the Holy Spirit in the early believers, some experienced physical manifestations.

Sometimes when people are filled with the Spirit, they experience fire – a symbol of passion and purity – within them. Such experiences are often described as feeling heat in one’s hands or arms.

Other times, it’s like wind. The Hebrew word for “wind” is the same as “spirit” – ruach. It’s an onomatopoeic word, like the breath of God coming into a person. It can look like fluttering eyelids or people breathing deeply – sometimes it’s like being blown over by the wind.

These don’t need to happen for someone to be filled with the Holy Spirit. But if they do happen we shouldn’t be surprised or worried.

Pursue the Holy Spirit, not the manifestations.

We also shouldn’t focus on these manifestations. That’s not what the Holy Spirit is about; it’s about God’s love being poured into our hearts.

If you were to fall in love with someone and got amazing tingles in your spine, you wouldn’t Google how to recreate the experience. You’d pursue the person.

On the cross, we understand God loves us: Jesus died for us – that’s how you know that God loves us. But through the Holy Spirit, you feel God’s love.

2. We express our love

When we’ve experienced God’s love for us, we want to express our love – it overflows for God and for other people.

That’s what worship is about. That’s why we sing these songs, which are mainly about God’s love for us and about our love for God. It’s okay to raise our hands in worship – that’s how the Jews and Christians in antiquity expressed their worship.

The New Testament also talks about “raising holy hands” in prayer to God. That’s the traditional form of prayer.

Unpacking the basics: Why and how do we pray?

Pope Benedict wrote in his book The Spirit of the Liturgy about why we do that: it’s because it’s like opening ourselves to God. It’s like “more surface area” for God!

Emotion is a very important part of our faith, so we need to be free to express emotion in our relationship with God.

3. We can receive a new love language

Being filled with the Spirit allows us to use the gifts of the Spirit, the first of which is often speaking in tongues.

Paul talks about two different types of tongues. Angelic tongues are different from human tongues. Human tongues are where God gives us a language that we’ve not learnt but is a recognisable human language. That’s what happened on the Day of Pentecost.

More commonly people receive an angelic tongue – that’s not one that you would recognise. And Paul says that that is a form of prayer. He says when he prays in tongues, his spirit prays.

In other words, it’s a way of expressing what you feel here, without going through the process of putting it into a language that you know.

You know how it’s like in a human conversation: Sometimes you want to express something but you can’t find the words for it. With God, he can give you this language that frees you up from the necessity of putting it into a language you already speak.

It’s a beautiful gift, offered by God. It comes from his Holy Spirit, and it helps us to express our love in our love relationship with God.

If you’re not sure you want the Holy Spirit, or you’re worried that something bad would happen to you, read on to see what Jesus said.

Jesus didn’t say: “How much more will your Father in heaven give the Holy Spirit to people who are mature in their faith, or who’ve lived a good life, or who are very advanced Christians”.

He said: “How much more will your Father in heaven give the Holy Spirit to those who ask him!”

So, shall we ask Him? 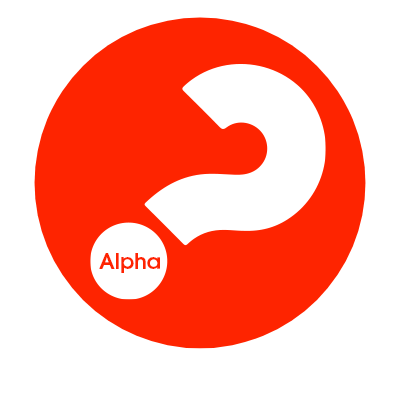 Alpha is a space for anyone to explore questions of life and the Christian faith. It is a place to ask questions and share their point of view in a safe and honest environment. Alpha is free and everyone is welcome.