Sacrificial love: Would you donate your kidney to save someone you love?

In the lead up to Good Friday, as we remember Jesus’ ultimate sacrifice, we bring to you stories of people who are inspired to love sacrificially. Meet Samantha*, who recounts the journey she took in choosing to give her sister a new lease of life through a kidney transplant.

Samantha* (48) is a full-time ministry worker who is bright and cheerful.

If you were meeting her for the first time, you wouldn’t be able to guess that she underwent a major surgery just four months ago when she donated her kidney to her eldest sister.

10 years prior, Samantha’s eldest sister (58) had already been diagnosed with chronic kidney failure. But it was only two years ago when Samantha’s sister’s condition started to deteriorate badly, with her kidney function dropping to dangerous levels of just 7%.

Although Samantha’s two other siblings were also willing to donate their kidneys to their eldest sister, they suffered from pre-existing medical conditions which meant Samantha was the healthiest candidate to be a donor.

In Christ, a bond deeper than blood

Though Samantha’s eldest sister was adopted into her family as a child and the two are not blood-related, their relationship has always been strong.

“When my sister was adopted as a young child into my family, she was the first one who brought the Gospel to us,” recounted Samantha. “So, before my mom and grandmother passed away, they accepted Christ through her.

“And we worked together to share the Gospel to my grandma. So our relationship has always been very good.”

Deciding to donate a kidney

Seeing her beloved sister suffering in great agony and “slowly wasting away” due to kidney failure stirred up compassion in Samantha.

“It was very stressful, especially for her family, when they saw how she was deteriorating every day,” said Samantha.

“She had gout and couldn’t walk properly. She was in a lot of pain, she couldn’t eat a lot of stuff, and she would be tired very quickly. The whole thing was just very miserable.”

Additionally, Samantha’s concern for her nieces and nephews also influenced her decision.

“Her children are about the same age as my children, and I wouldn’t want to see them without a mother,” she said. “So donating my kidney was a natural thing I would think to do when I’m able to.

“She was at the end. And her daughter was telling her to just go for the transplant already. That kind of frustration and long wait was very hard for the family.”

Alternative options to a kidney transplant

A living donor kidney transplant was not the only treatment option available for Samantha’s sister.

Kidney dialysis was another option. However, dialysis would come with major drawbacks for the patient such as health complications and a decreased lifespan.

Additionally, her sister would have to be tethered to the dialysis machine for hours every week, resulting in major inconvenience and disruption to daily living.

A deceased donor kidney donation was also an option, but the waitlist was extremely long, stretching to some 9 years. And until then, Samantha’s sister would have to go for dialysis anyway.

As such, despite the availability of other treatment options, a live donor kidney transplant had the best prognosis as it would give her sister a better quality of life.

Concerns and cause for hesitation

However, there were several concerns that Samantha had to carefully consider before choosing to undergo this major surgical procedure.

In addition to the major lifestyle changes she would have to make post-surgery, she also had to consider the impact of the surgery on her loved ones.

As a wife and mother of two, Samantha initially faced some resistance from her own family when she broke the news of wanting to donate her kidney.

“At the beginning it was very difficult, because my entire family has gone through surgery before. They know the risks of surgery, and my family loves me a lot, so the fear of losing me was very real,” she recalled.

Additionally, Samantha also shared that the other fear was the possibility that she would not able to take care of herself in the future, burdening her family. As she weighed up these concerns, the panel of doctors she spoke to were also upfront with her about the post-surgery risks and considerations, to ensure that she was making an informed decision.

Undergoing the transplant meant having to be extra cautious post-surgery to protect her only remaining kidney.

“I would have to be more careful, like if I travel, I cannot do all the crazy stuff that I like to do,” said Samantha.

Having only one kidney could also be dangerous for Samantha if she were to develop a major illness after the surgery such as cancer or an autoimmune disease.

Nevertheless, Samantha resolved not to let the what ifs and fear of the unknown stop her from stepping out in faith.

“I’ve learnt more in two weeks than the last 24 years,” says young Singaporean who dropped everything to help Ukrainian refugees

“All these things are things that we do not know because they’re in the future, so you just have to trust God in this process,” she affirmed.

With this reassurance and the support of both their families, Samantha and her sister decided to go ahead with the kidney transplant.

The two would see God’s hand at work as He faithfully provided for them, paving the way for the transplant to proceed smoothly.

Indeed, given that Samantha and her sister are not blood related, the fact that they turned out to be genetically compatible was truly miraculous.

Samantha and her sister were a great match – right down to having the same blood and tissue type! Both sisters also saw God’s hand in terms of provision and protection leading up to their surgery.

The insurance policy that Samantha had bought stated that, as a donor, she should already have subscribed to a plan for at least two years prior to receiving official news of the need for a kidney transplant.

“I bought my plan three years before hearing the official news from the doctors, so it was very timely,” she reflected.

In addition to her insurance, her sister’s company also covered 85% of the surgical cost.

Thankfully, Samantha’s sister’s kidneys were also able to hold out until the surgery (and without the need for dialysis) and neither of them caught COVID-19 which would have impeded the donation process.

While Samantha’s sister also had a lot of fear before the transplant, afraid that she would die during the operation, God gave her the strength to be able to go through the whole process.

The kidney transplant surgery finally took place in December 2021, and both sisters have since recovered well after the successful surgery.

As a result of the transplant, Samantha’s sister was given a new lease of life and is healthy and well once more.

“Now she’s able to eat everything she wants to eat, except for her desserts. She can walk a lot now, much better than before, she doesn’t pant and can do a lot more. She’s slowly getting better and stronger,” Samantha said with a smile.

However, Samantha’s lifestyle has had to change to accommodate her loss of a kidney, such as not riding on her scooter or avoiding contact sports to avoid the risk of damaging her sole kidney.

It’s a privilege and it’s because of the grace and mercy of God that I can do this for my sister.

Having only one kidney also exerts a physical toll on Samantha, who enjoys physical exercise as a hobby.

Nevertheless, Samantha is not disheartened by this and she remains optimistic.

“Since I have given my other kidney, it’s about 48-49% of my kidney function I’ve given away. My remaining kidney should be able to grow to up to around 75% function, then hopefully things should get a lot better, like energy and panting wise. I can still run so it’s no problem,” she quipped cheerfully. Despite these personal sacrifices and major lifestyle changes she has had to make, Samantha does not view this incident as laying down her life for her sister, but as a privilege to be able to provide for her sister in this way.

“Someone in church told me, ‘Samantha, you are like an example of Jesus dying on a cross and sacrificing!’ But I didn’t think of it like that. It just was something that I could do,” Samantha said.

“Yes, there’s an element of sacrifice, and of going through pain and suffering. But at the end of the day, I didn’t lose my life, I’m still well.

“So, it’s a privilege and it’s because of the grace and mercy of God that I can do this for my sister.”

Nevertheless, to me, Samantha’s model of sacrificial love does reflect Jesus’ love when He laid down his life for mankind’s redemption, similarly giving us a new lease of life.

It makes me wonder how far I’d go for the ones I love. Love can be costly and requires personal sacrifice on our part.

This Good Friday, as we commemorate Christ’s ultimate example of sacrificial love on the cross, how may we also learn to lay ourselves down for others?

Easter 2022: There’s something for everyone 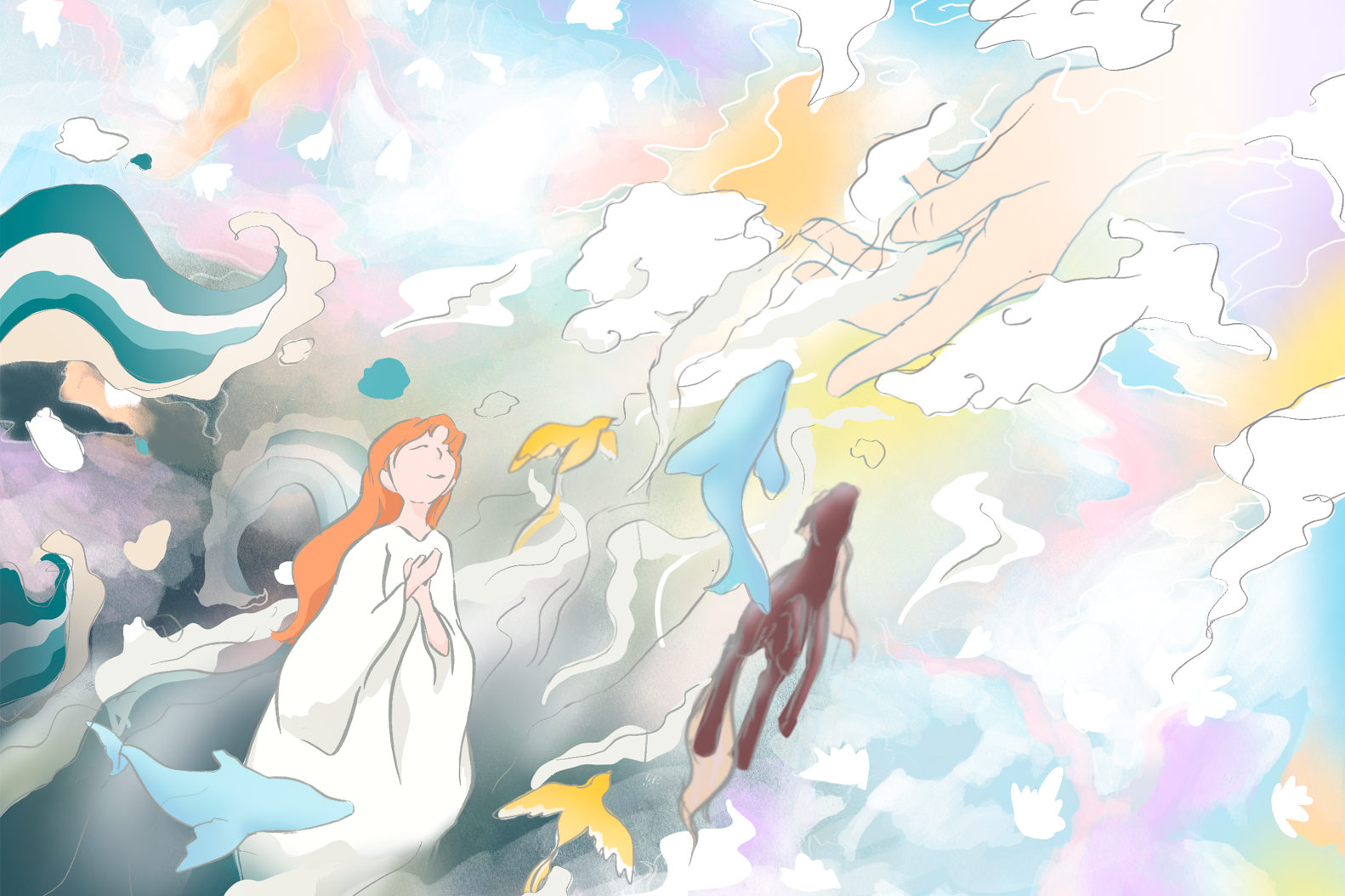