Light Has Won: Hinghwa Methodist Church has a song to sing

It all began when Sam, one of the youths from my church, approached me and asked to write a song together.

Sam had suffered a bad stomach infection a few years ago and it gave him frequent vomiting episodes that dragged on for years. He finally saw a doctor, who told him that it might be stomach cancer. It’s a devastating thing to hear, especially for a dancer in the prime of his youth.

But Sam persevered in prayer, clinging tightly to the instructions in Philippians 4:6: “Do not be anxious about anything, but in every situation, by prayer and petition, with thanksgiving, present your requests to God.”

Later, he went for a scope and the results showed that he was perfectly healthy!

In that same year, Ivan Chan, a father of two teenagers, was experiencing a crisis of faith of his own. Over the course of six months, Ivan applied for 39 jobs and had gone for 23 interviews.

But it all seemed futile and he was losing courage. “It’s terrible when you’re in the waiting, it challenges you as a person and what you really believe in. Is there really a God who cares for you?” Ivan said.

But in his darkest moments, God reminded him of the life of Peter: In a storm, you can walk on water if you keep your eyes on Jesus.

He wrote a song titled “God Never Fails” when he finally got a job, on his 40th application, exactly seven months after he’d left his old job.

Inspired, I too began expressing my journey through music and lyrics.

I wrote “Bring Praise” during a very trying time for our family. We discovered that our daughter had a congenital heart defect and were coming to terms with what it would mean for her and the uncertainty that came with the illness.

I recall moments when the last thing I wanted to do was to sing praises to God. I feared losing my daughter if the operation didn’t succeed.

During that period, I constantly brought these anxieties to God in prayer and it was during one of my personal prayer times that the melody and words for this song were crafted.

And that’s when the songs truly came to life — on the lips of the congregation and in their hands lifted in worship.

As I sang these lines of the song: “I will not offer something that doesn’t cost; I will not give to you without honour”, tears streamed down my cheeks as I felt the comforting presence of God fill my heart. I knew that he had put a song in my heart that allowed me to sing again.

The momentum built and it led us to embark on a season of songwriting, and we issued a call to the young and the old in our church to join hands for this initiative.

Over the course of the next few months, a larger group began to form and more songs were birthed in this time, including a Mandarin song by a young lady who had walked with God through depression and very trying circumstances.

We began singing some of our songs in our Sunday service. And that’s when the songs truly came to life — on the lips of the congregation and in their hands lifted in worship. After a season of mentoring by Alarice Hong from Awaken Generation and a fateful conversation with Pastor Andrew Yeo from Cornerstone Community Church, the opportunity to collaborate and record the songs written in this season into an album became a distinct possibility.

At this point,  excitement began to stir but one big problem remained: We had absolutely no financing to record an album that would cost a sizeable five-figure sum.

What happened next was nothing short of miraculous. As the team prayed together, we surrendered this dream to God; if it was truly from him, He would provide, and if not, we would wait.

Over the course of the next few months, different people from both services came forward to sow into this project. Before long, we were fully funded, by God’s grace and through the generosity of the older generation.

Light Has Won is a collection of original songs birthed from the heart of our church.

The songs are birthed out of stories of struggle and pain, written not in perfection but in a season of darkness that was ultimately illuminated by the one true Light, our Saviour and King Jesus Christ. In 2015, the young people in Hinghwa Methodist Church had a dream that they could write songs that would touch the heart of God and touch the lives of others.

By the time the was dream realised three years later, it had brought together three different generations in a small, traditional church that had never before embarked on such an endeavour in its hundred-year history.

Our album, Light Has Won, is significant not just because of the stories that gave birth to them but also because of the three-year process of making the album.

Light Has Won is our story. And a testament that God is able.

This Christmas season, come join us as we declare that the Light of the world has come to give light to the world.

Hinghwa Methodist Church invites you to their album launch concert on 28 Dec, Friday, 7.30pm at 93 Kitchener Road. Pastor Chris Long from Kingdomcity will also be sharing an inspirational message alongside an exhibition of stories, merchandise booths, free snacks and craft coffee. Click here to find out more. 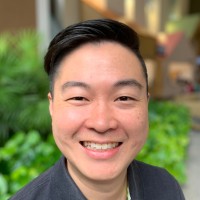 Ivan is a youth and young adult staff at Hinghwa Methodist Church.