I wanted to stop being a workaholic

I entered into what seemed like a reputable first job. But soon I was being destroyed by the very thing that defined me.

“Are you surviving?” my colleague would ask.

“No,” I replied, and we laughed it off, thinking it was just something everyone goes through during busy season at work.

But the truth was, emotionally, mentally, I was dying.

I am someone who many describe as a workaholic.

When I entered into what seemed like a reputable first job, I praised God.

But inside, I looked forward to the success that awaited me. I set my hopes on exceeding expectations, climbing up the career ladder and doing well.

Little did I know I was stepping into what turned out to be one of the darkest seasons of my life.

I was unwilling to relax. But neither were my circumstances.

In my job, we had peak seasons. Going into my first peak season, I knew that overtime was expected, but I thought I would overcome it easily.

After all, based on my past internships, it had been my nature to do overtime.

But when peak season kicked off, my workload and hours began to grow faster than I envisioned.

Perhaps, being in my first full-time job I didn’t take failure as an option. I put a lot of pressure on myself to do work well.

Work nights stretched into consistent 3-4am mornings, even on weekends. While my family was sleeping, I would be awake, eyes glued to my laptop.

I was unsettled about unfinished work and could not sleep if there was a problem I could not solve.

Sure, I could blame it on peak season. But there was no doubt that the high expectations I had placed on myself, and the refusal to be deemed as a poor performer, played a role in adding immense stress and burden on myself.

Yet, I was unwilling to relax. But neither were my circumstances. Despite the late nights and hard work I put in, my tasks seemed never-ending. I was already very hard on myself, so what made it worse was the lack of care from higher-ups.

It could come from a reminder that “I hadn’t hit the target that week”, a question of “can you do more?” or a passing remark that as the newcomer, I was automatically deemed the “lowest life form” in the company.

Amid all these, I put up a strong front. Being a workaholic meant I could not disappoint my colleagues and their expectations.

Sure, I will do more. Though I knew the amount of work in front of me, I instantly accepted new work and deadlines, barely negotiating them.

If my managers asked if I could do another task, my first answer would always be “yes”. I forced myself to push through regardless of how exhausted I was.

I began to distance myself from important relationships, with family, friends and God. I had no time!

Though I was mostly working from home, 24 hours could pass with me having said fewer than 10 sentences to my family.

I delayed meet-ups with friends. To God I said: “Sorry, I have no mental capacity to reflect on your Word, I hope you understand.”

I even remember being angry with a church mate who I had looked up to for telling me to attend cell group. “You don’t understand!” I thought.

From here, things only went downhill. As peak intensified, my stress turned into anguish. Because I had isolated myself from my relationships, I felt exceptionally lonely and suffocated. Worse, turning to God for help was no longer instinctive to me.

My physical, mental and emotional health declined. I would become much more irritable and anxious.

While I tried to keep my strong front, my tears would start rolling down when no one was around, almost as if on cue.

My life felt like pillars of sand that were quickly falling through my fingers, and I could not salvage any of it.

Even though I could count the days till peak season ended, I could not bring myself to see past the intense darkness and weariness of each day.

I was being destroyed by the very thing that defined me.

Work that was meant to escalate my happiness through good performance became such a bitter thought that I wanted so desperately to flee from.

As I hit my lowest, I realised that I simply could not do it.

Was this the life God purposed for me?

I desperately needed my Heavenly Father to deliver me from the pit I had pushed myself into. I wanted to seek Him and pour my burdens to Him.

Most days, words fell short and all I could utter was the Lord’s Prayer from memory, but I did so anyway. Over and over.

The financial planner workaholic who finally burned out

Slowly, I felt the Holy Spirit’s assurance that God knew and cared.

I also recounted the times He had been so gracious to provide me with community to sustain me.

Friends who prayed for me when I didn’t ask, who sent me encouraging messages even though I took a long time to reply, and my boyfriend who stayed up with me over Zoom when I had to work till very late.

Despite my unfaithfulness towards Him, God took care of me.

In contrast to colleagues who were always asking for more, my Heavenly Father received my broken and empty hands.

As I returned to Him, I knew deep down that He would give me the warmest embrace. I broke down again, realising how underserving I was of Him or His concern, since I neglected Him at first instance.

When I picked up my Bible again, I came across this verse one day: This verse lifted my heart in a way I cannot fully describe.

Chasing after worldly success does no good — far more important and lasting is my relationship with Him.

As I understand my Saviour better, I’ve also come to be deeply thankful.

For in contrast to colleagues who were always asking for more, my Heavenly Father received my broken and empty hands. I was never meant to do it all.

Rather than viewing weakness as inferiority, it was through His acceptance of me — flaws and all — that I experienced the height and depth of God’s love.

When peak season closed, I wondered if I should leave the company. But when I received my appraisal, I was very tempted to stay on, as my path to success looked promising.

Could I stay on and just change my workaholic mindset instead? I wrestled with this thought over and over. I also didn’t want to be a quitter!

In a very timely manner, God sent a trusted spiritual friend who gently told me that she sensed that I should leave the company. At this point, she hadn’t known about my thoughts of leaving.

After a lot of prayer and reflection, I personally also sensed God’s call to leave.

Given how easily I’d plunge myself into work, I really needed an environment that gave me enough space to learn that work isn’t everything. This space was not available at my workplace because of the nature of my job.

So I started my job search, with deep-rooted trust that God would provide a way. He truly did, and I have since started my new job. Today, work is considerably less demanding. I have that space to get back into the rhythm of quiet time and time with others.

My job has its own share of difficulties, but I am now much more careful not to let my workaholic instincts reign by remembering these things.

My identity in the Lord Most High is unshakeable and the most valuable. It is because of what He has done for me on the Cross — something which I could never do. If my own hands cannot save me at the most crucial point, surely work cannot.

My pride does not have to puff up when I do well at work, nor does my self-image have to shatter when I fall short of expectations. I can always be contented.

God, not man, is to be feared with ultimate reverence. He is the biggest boss. Rather than always thinking about how to please my human bosses or fearing their feedback, I ought to seek to delight God instead and to take His Word even more seriously as I do my work tasks.

Other than being a boss, God is also a boss who loves. I chase His heart not out of intimidation, but out of a place of rest and amazement because of who He is.

To be less of a workaholic I ought to be more intentional in being aware of my motives at work. Am I working late because I want to build my identity? Or am I getting overly stressed because I fear my boss so much more than God?

Rather than let the day pass and be fully absorbed into work, I ought to always be discerning and dependent on His strength to make the right decision.

I thank God for little milestones so far.

Being able to sleep at night even with unfinished work; spending more quality time with loved ones even during busy period; and learning to look beyond myself, to show concern and care for my colleagues the way God has for me.

I remind myself often — weekdays may be for work, but let weekends be for others. Above all, let my life be lived for God.

As I spend more time away from work, my heart has become more joyful because my source of joy now comes from the lord.

Learning to put away my workaholic self is only possible through consistent prayer, His word and dependence on God. Having a group of like-minded believers is very important too!

Of course, it is easier said than done. The journey seems slow on some days, but I do not regret it nor do I want to give up.

For I know that my Lord holds my hand to strengthen and equip me on this better journey to pursue Him instead. My Game, His Glory: How Athletes in Action SG got its kickoff to reach the sports world 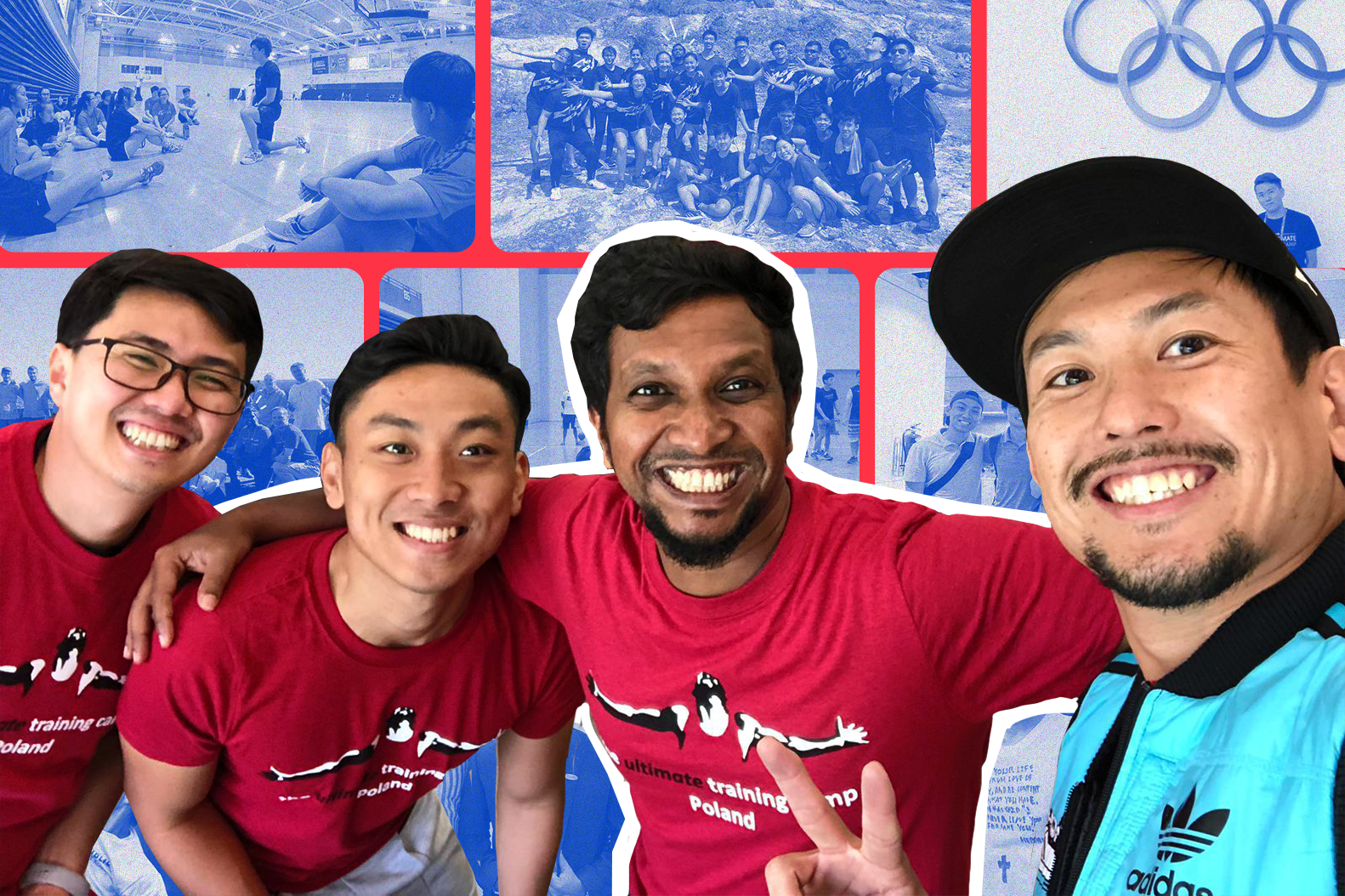