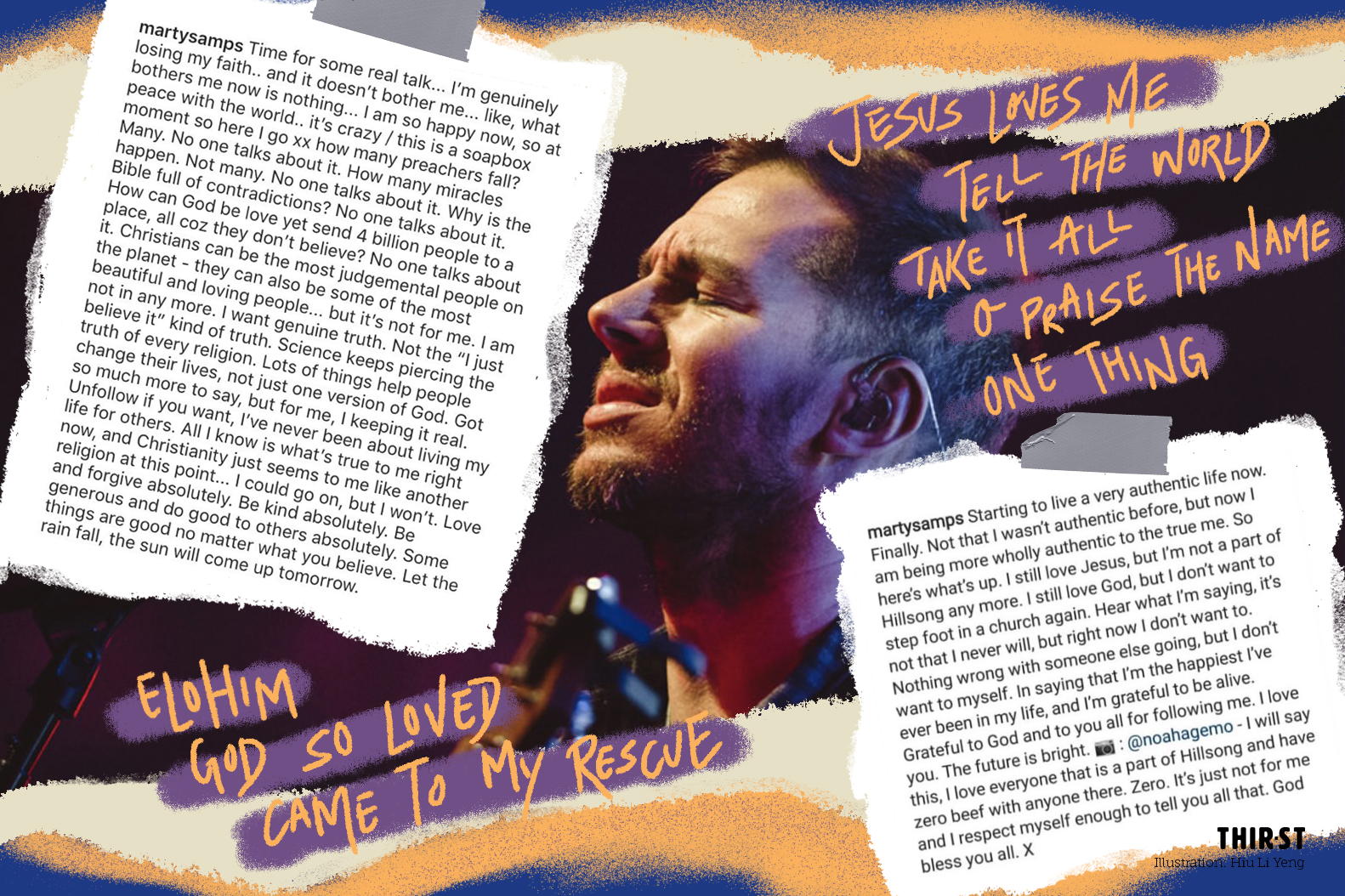 “Time for some real talk… I’m genuinely losing my faith,” Marty Sampson wrote on his Instagram account yesterday, August 12, 2019. “And it doesn’t bother me.”

Within seconds, the world, many who grew up loving the music he wrote for Hillsong Worship – some as recent as their latest albums – had flooded into the comments.

His announcement comes barely a month after Joshua Harris, writer of the controversial I Kissed Dating Goodbye, informed social media that he had left both his wife and the Christian faith.

Even if his name doesn’t immediately strike a chord, Sampson’s songs probably will: “Tell the world”, “Came to my rescue”, “O praise the name (Anástasis)”, “For God so loved” and  “Elohim” are just a few from his decades of songwriting.

He has since cleared his Instagram page of most posts, including the ones in question. But yesterday’s shocker appears to have been preluded by a similar one last year, where Sampson briefly mentioned he was no longer in Hillsong Church and did not intend to step into any church for the time being – although he “still (loved) God”. Needless to say, much like his music, the ripple of his words have been making their way across the digital oceans. Some of us have been sitting in disbelief, reading and re-reading the lines and between the lines in search of a truth we have yet to define. But this “genuine truth”, that Sampson declares to be searching for himself, is possibly more elusive than we would care to admit.

How do great men of the faith, who have carried truth to thousands, if not millions – one day pack their bags and leave home for a distant country? Or, in another picture, tap out of the grand race and say: “I can’t go on any further”?

In the most millennial terms: Has Marty Sampson left the chat?

TIME FOR SOME REAL TALK

1. The journey is looooooong

I often wonder, as a child of the generation with the shortest attention spans (sometimes 140 characters and no more), how I will ever endure the next few decades of walking with Jesus.

All of 30 years old, I still have a good 50 years on earth with the Lord, if He wills. I look back at the tumultuous road I’ve been on and know I don’t possess the human capacity or confidence to stay the path.

Where have all my church friends gone?

When Peter boldly declared to Jesus that, unlike the others, he would never betray Him (Matthew 26:35, Luke 22:33), I imagine the Lord looking lovingly at Him, as He often did when people said things like that (Mark 10:21).

“I appreciate the heart, Pete, but I hate to break it to you…” He knew Peter didn’t possess the strength to make it, as much as he earnestly desired to. You see, none of us do. That’s where we must start.

It was only after Peter found himself denying His beloved leader three whole times that he came to the much-needed end of himself. The road ahead would never be survivable if undertaken by human strength.

It was only after Peter found himself denying His beloved leader three whole times that he came to the much-needed end of himself.

No matter how strong our faith is, strength will fail: Moses killed a man thinking this was his rise to God’s promised leadership and ended up having to flee from his people; Elijah prayed that he might die because he was filled with fear at the threats of an evil queen; David cried out to God in lengthy poetry about the dark night of the soul.

Marty Sampson had enough of religion as he knew it and left it all behind.

But this is comfort for God’s people: “Even youths grow tired and weary, and young men stumble and fall; but those who hope in the Lord will renew their strength.” (Isaiah 40:30-31)

Jesus knows we will fail

“I hate to break it to you,” Jesus might have thought as He gazed knowingly at His dear Peter. “But I’m your only hope for finishing this race.

“We’ll get there together.”

2. The journey is fierce

I don’t think I’ve even experienced the worst of it yet, but the past 20 years of choosing the way of the Cross have been intense. Intensely difficult. One of the key reasons: The Christian journey is a battle for our lives (Ephesians 6:12).

There are really only two kingdoms in this world – one of light and one of darkness. When we say we’re Christians, what we’re really doing is declaring allegiance to the God of the Kingdom of Heaven. We’ve chosen a side, defecting from the kingdom of darkness by the power of Jesus Christ (Colossians 1:13).

And as it is with any gameplay, the fight is on to stop us – and true to their nature, the other side doesn’t fight fair.

Peter, now all woke from his own trial of faith, writes in his first letter to the early churches: “Be sober-minded; be watchful. Your adversary the devil prowls around like a roaring lion, seeking someone to devour.” (1 Peter 5:8)

The devil is out to steal your destiny, kill your zeal for the Gospel and destroy your testimony (John 10:10), among many other things that will cripple you and attempt to disqualify you from the race.

He knows your Achilles’ heel. Your kryptonite. Insidious ways to break your heart or send your mind spiralling, like hard tackles from the side that knock the wind out of you.

That’s why we must daily put on the armour of God (Ephesians 6:10-11) – so that we can press on despite the punches and fiery arrows (Ephesians 6:16) and not die by them. That’s why we have to fix our eyes on the commander and Chief Shepherd in this war, Jesus Christ, who bought for us the power to endure and overcome (Hebrews 12:2).

In the journey upwards, out of the mire of sin and the depravity of our human condition, the battle to pull us back, slow us down or outright distract us from our goal is fierce. We are sheep among wolves (Matthew 10:16). Let’s not forget that Marty Sampson is very much a part of this expedition. We cannot shoot our wounded.

3. The journey is scary

When Elijah was threatened by Queen Jezebel soon after he executed her pagan prophets, we see a very different side of one of the Old Testament’s greatest prophets (1 Kings 19:3-5). “I have had enough,” he told the Lord, “take my life.” The same man had just called down fire from Heaven one chapter ago (1 Kings 18:20-40).

You know what is the scariest thing about this Christian walk? The uncertainty. The looming fear of everything that could go wrong can be much more daunting than the actual things that do. Will I get severely hurt on this next rocky stretch? Will bandits suddenly appear and rob me of everything I hold dear?

And perhaps, like Marty Sampson: What if everything I thought I believed in isn’t true?

This anxiety of the unforeseeable gripped Elijah’s heart. Like the disciples who lay down to sleep in what some theologians call “the sleep of grief” with Jesus’ impending arrest, he closed his eyes and retired in despair under a bush.

Even when we raise our white flags or tap out of the game altogether as the strength and courage drains from us, the Lord is near with His sustaining grace.

I love what happens next: The angel of the Lord wakes him up to eat. He finds bread and water – sustenance – next to him. When he goes back to sleep, the angel comes back and says some of the most comforting words: “Get up and eat, for the journey is too much for you.”

The journey is too much for you.

Even when we raise our white flags or tap out of the game altogether as the strength and courage drains from us, the Lord is near with His sustaining grace. In the terrifying uncertainty of life, He invites us to assume the posture of a child – not afraid to ask “why”, not afraid to expect the best of a good Father (Luke 9:47-48, Matthew 7:11), not afraid to curl up and hide from the world for a while.

FOR GOD SO LOVED HIS PRODIGAL SONS

The Greek word anástasis refers to Jesus’ resurrection from the dead and His return to life with great triumph as the only sinless man. It also literally means recovery from a debilitating condition, especially the erosion of human tissue because of radiation.

Fear, doubt and distance can erode a man’s soul in the unyielding course of life, wearing him down from the inside. But where the devil sees only sifting as wheat (Luke 22:31) – a tearing apart of everything we know in hopes to destroy us – our sovereign God sees refining (Psalm 66:10, 1 Peter 1:7). Purification. Freedom.

Done with church? Hold it right there

In the words of Senior Pastor Benny Ho: “The only thing that was burnt in the furnace Shadrach, Meshach and Abednego were thrown into were the ropes that bound them.” (Daniel 3:16-28) There is hope even in the heat of the trial of faith.

We don’t know what fires Marty Sampson has been walking through, or which part of the journey he is at. We don’t know what he is unlearning, learning or relearning. But this is the moment where the Church must arise to do as Jesus did for Peter in Luke 22: He prayed that his faith will not fail; that when he turned back, he would strengthen his brothers (Luke 22:32).

What we say about him now is more telling of our faith than his.

Why I left the faith: How the church must do better

Marty Sampson is losing his faith. Maybe the disciples felt the same when Jesus breathed His last on the Cross. But this is the power of anástasis, as Sampson wrote about himself: In humanity’s greatest defeat lay Christ’s greatest victory.

Because of what He did for us, there is everlasting hope of recovery from the debilitating condition of sin, of doubt, of despair. There can be life after death, even the slow death of faith. Anástasis is our promised resurrection.

O trampled death, where is your sting?