Filled with the Holy Spirit: How did that experience change the lives of these church leaders?

What happened at Pentecost might seem like an out-of-this-world experience only found in the book of Acts, but the Holy Spirit continues to fill believers today in incredible ways.

Thir.st speaks with church leaders who share their personal stories of how they were baptised with the Holy Spirit.

Many of us would have heard of the Anglo-Chinese School (ACS) clock tower revival in Singapore as something that happened long before our time.

But did you know that it was not a standalone incident?

There were many instances of the baptism of the Holy Spirit in other schools, among churches and at workplaces as well.

This Pentecost, hear from church leaders on how they encountered the person and power of the Holy Spirit in their own way.

All of them experienced this during the Charismatic Renewal, when revival swept across Singapore in the 1970s and 1980s.

You’d be amazed at how dynamic the Holy Spirit is!

Though it happened over 40 years ago, Pastor Yang Tuck Yoong, Senior Pastor of Cornerstone Community Church, remembers his heart “burning” like it did when he first got saved.

After all, that blazing encounter was the game changer in his life.

As a young man serving NS at the time, he described himself as having “spiralled down into a life of sin and real bad rebellion” after his father passed away.

It was in the midst of this difficult period that a friend invited him to a Friday night meeting at St Andrew’s Cathedral. 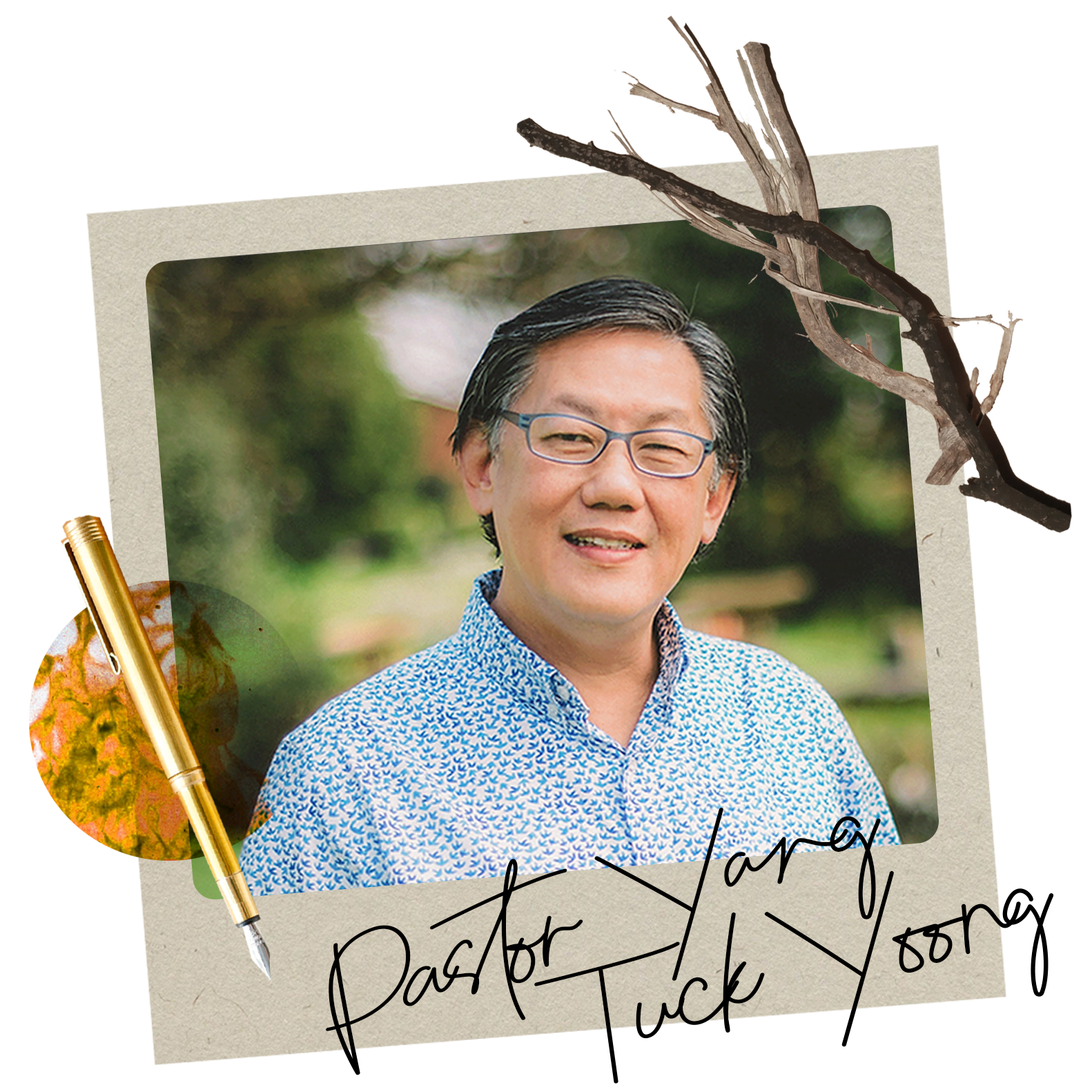 During worship on the second evening, Pastor Yang vividly recalls the preacher saying: “The Holy Spirit is here.”

“The moment he said that, it was like someone turned on the power switch to the room. The whole room became energised… it’s like someone walked into that room,” he said.

People around him also collapsed to the ground. Suddenly, Pastor Yang felt this “fire” rushing down his entire arm into his body, like a million volts of electricity. It was like the finger of God had touched his fingertips.

Relating how his legs went soft as a surge of divine power coursed through his body, this lasted for around 20 minutes before the intensity lifted and he managed to get up.

Describing what had happened as “one of the most amazing experiences” in his life, Pastor Yang said that for the next six months, there were bursts of joy and an unspeakable peace every morning when he opened his eyes.

From then on, he also started to see a phenomenal increase in the power of God in his life as he prayed for people and witnessed to others. Similarly, when Pastor Benny Ho, Senior Pastor of Faith Community Church in Perth first witnessed the power of the Holy Spirit in his teens, he recounted that the atmosphere in church was electric.

But it wasn’t until two years later, in 1981, that he had his own encounter. By this time, he had also been desiring to be filled with the Spirit.

While listening to a visiting evangelist preach at the Kallang Theatre, Pastor Benny had what he called a “Cornelius experience” (Acts 10).

“While he was still speaking, the Holy Spirit fell upon me while I was still in the bleachers. I started trembling, and a language began to come out of my mouth,” he shared.

Tongues-untied: The gift that surprised me

“I stopped myself because I thought that you could only start speaking and praying in the Spirit when hands are laid upon you, so I just kind of waited and waited.

“When he finished, he gave the altar call, and I was one of the first few to go up to the front.

“The moment hands came on me, I just took off. For the next half an hour, I was laughing, crying, speaking in tongues all at the same time.

“And God was doing a deep work inside my heart, healing me from the inside out, of all the hurts I had in the past.”

However, for other church leaders, the baptism of the Holy Spirit came not through a public meeting or an evangelistic rally.

In 1975, retired Methodist pastor Rev Dr Lorna Khoo had just completed reading a book on speaking in tongues when she felt a voice inside of her telling her to pray for the baptism of the Holy Spirit.

She tried to delay it, reasoning that she didn’t want the gift of tongues, but the voice kept urging her to pray, so she obeyed. “I sensed something deep inside was coming up… And I remembered what it’s said in Scripture, that you’re supposed to open your mouth and the Spirit will give utterance. So I did, and I spoke in a different language.”

Still unsure if what she was experiencing was from God, she decided to carry out a few tests on the spot.

Pastor Lorna then realised that in addition to being able to do all of that, something seemed different about her.

Her encounter with the Holy Spirit happened at her workplace instead. One day, while she was in office, she had a strong desire to receive the gift of tongues.

Deciding to head to the bathroom for some privacy, she talked to the Lord about her desire to know Him in a deeper, more intimate way.

“There and then I prayed, and the Lord gave me the first syllable — only one syllable and it was ‘la la la la la’,” recounted Evelyn in excitement.

As she continued to pray in that one syllable, over time she received more and more syllables. “It became a heavenly language for me,” she said.

Not just speaking, but also hearing

Sharing how being baptised with the Holy Spirit impacted their lives, many who were interviewed said that from that moment on, their eyes were opened to spiritual things that could not be discerned on their own.

Describing how the Bible came alive and was “no longer just a book”, Evelyn said: “I began to receive more and more of these verses that spoke to me about my identity in the Lord.”

This also led to personal breakthroughs. “I used to have a fear of being alone from very young… that fear was dispelled because I knew who I was in the Lord,” she revealed. Besides having the power to overcome sin, he received truths and insights from the Word of God that went beyond his own understanding.

“And then I began to be able to preach, with signs and wonders following,” he said.

Things like prophetic words, healings and miracles that were not common before in his ministry started occurring.

“Hearing the voice of God is the other big thing that happened,” Pastor Benny added.

“When a person is really filled with the Holy Spirit, we begin to receive the bidding, the guidance of Spirit that is very specific. And that’s been really, really helpful.”

In the same way, Pastor Lorna observed that she grew in being able to listen to God’s voice and becoming more open to His guidance.

“We tried to sense where He was leading us into, rather than come up with our own plans,” she shared of one of the Methodist churches she was in.

“And I thought that was really exciting because it led us to reaching out in missions to East Timor and different places as well.”

Explaining how being filled with the Holy Spirit has impacted their relationships with others, Pastor Benny pointed out that revival and evangelism go hand-in-hand.

“When I was filled with the Holy Spirit, that was when I really began to have this passion and desire to share the gospel with others,” he said.

Recollecting how he found it so hard to share the gospel with anyone before, this started to change after he was baptised with the Holy Spirit. Evelyn, too, noted that she had the boldness “to evangelise to anyone”.

“The first thing I did was to pray for my parents become Christians. They were staunch idol worshipers, (but they) came to the Lord at the age of 67,” she said.

Her zeal for evangelism also led her to share the gospel to her relatives and even people whom she crossed paths with as part of her work.

Emphasising the importance of the baptism of the Holy Spirit in the life of every Christian, Pastor Yang said: “People must be honest. They must look at their lives and say, ‘Is this really the kind of life God wants me to live?’

Highlighting that it is the Holy Spirit that touches lives and break spiritual bondages, Pastor Yang believes that when we have that power from God, we can then minister to others in ways that we humanly cannot.

What about those who don’t have the gift of tongues?

As someone who has been prayed over many times and yet cannot speak in tongues, hearing this definitely makes me wonder: Am I not functioning fully?

But I know that I’m not worth any less in God’s eyes just because I lack this gift.

So I’m currently holding the tension that while the empowerment of the Spirit is indeed crucial for evangelism and victory in our lives, God is sovereign and He distributes gifts accordingly.

Until He gifts me with tongues, I will keep seeking Him and continue serving Him faithfully where He has planted me.

And even if He doesn’t, He is still good.

I’m still a child of God, and I remain in awe of the Holy Spirit as He works in my life and in the lives of others!

These interviews with church leaders were done as part of an upcoming documentary tracing the 1972 Student Revival in Singapore and its impact till today. To be released in July 2022, this is a Thirst Collective project in collaboration with Hope Singapore.