A dream of justice for the disabled

The greatest challenge I find in trying to do good is a lack of empathy.

The truth is I am a product of circumstances. I have my biases, blind spots and paradigms. These sometimes hinder me from being able to understand different perspectives, and climb in the skin of another and walk around in it.

It’s quite a prevalent problem. It can hinder Christians from better understanding certain justice and mercy issues, as well as people’s needs. It can prevent advocates from understanding the rationales for certain policy decisions or laws. Conversely, it can also prevent policymakers from understanding complex ground realities and relational dynamics.

We are like the Hebrew people in Babylon. We are exiles and not emperors. We are not some majoritarian force of power.

So in Singapore where there is a democratic system for law-making, every citizen must participate in law-making to help make just laws for all. Political leaders, civil servants and civic society — which includes the church — all have roles to play.

In this conversation we must remember that as Christians, we are like the Hebrew people in Babylon. We are exiles and not emperors. We are not some majoritarian force of power. We ought to live the best we can and do good. We should honour all, especially the authorities, and fear God (1 Peter 2:15-17).

Jesus remains the finest example to us all. He was like a humble servant who did not quarrel or cry aloud, who would not break a bruised reed or quench a smouldering wick (Isaiah 42:3), and yet brought justice to victory through the cross.

A LAW OF LOVE

I long to enact a law for people with disabilities (PWDs). Of course, the specifics would have to be worked out carefully in consultation with PWDs, their caregivers, and various stakeholders. It’s worth noting that Singapore has ratified the United Nations Convention on the Rights of Persons with Disabilities (CRPD) but does not have a specific disabilities legislation.

Why have such a law? Well, it’s a justice issue. God calls His people to justice, mercy and faithfulness (Micah 6:8). As I wrote in my book, The Justice Demand: Social Justice & The Singapore Church, the foremost conception of God’s justice is the inclusion of every person to participate in His community.

That is why justice was brought to victory on the cross. At the cross, everyone who repents of their sins and believes in Jesus can enter into the Kingdom of God regardless of their race, background or social-economic status (Galatians 3:28). This principle of inclusivity should first be expressed among the family of God. Then the people of God should express in relation to others in the world.

At the cross, everyone who repents of their sins and believes in Jesus can enter into the Kingdom of God regardless of their race, background or social-economic status.

PWDs have a pressing need for this inclusivity, and the Bible is very clear about this. For instance, Leviticus 19:14 is a Mosaic law prohibiting discrimination against PWDs. Furthermore, a large fraction of Jesus’ healing ministry served the PWDs. When the public silenced the blind beggar Bartimaeus, Jesus specifically called out to him and healed him, and Bartimaeus followed Jesus (Mark 10:46-51).

In Luke 14:12-14, Jesus exhorted people to host dinners not for their rich neighbours or even their friends, but for the poor and those with disabilities. King David made Mephibosheth, son of Jonathan, who was crippled in his feet, join him at his dinner table.

All through the scriptures I can see God telling us that PWDs are not to be devalued — but treated like His children!

BASED ON JUSTICE AND EQUALITY

In Singapore, PWDs make up one of the largest marginalised groups. We have certainly come a long way in supporting the establishment of many special education schools and social service organisations. But open employment continues to be a huge challenge for many PWDs.

There are still many instances of blatant prejudice against workers with physical, intellectual disabilities or those who are on the autism spectrum disorder (ASD).

There are also more subtle forms of prejudice. The greatest and most prevalent is the mindset not to consider PWDs for employment. This is something which cannot be entirely addressed by legislation or policy. The truth is, there are already numerous government grants and programmes which encourage employers to hire PWDs.

Instead we need paradigm shifts. We need far more than mere tokenism. While legislation cannot solve everything, it can help educate us as a society. A just law that we uphold can help us remember our commitment to the inclusivity of PWDs in our land.

Such an attitudinal shift cannot just be for PWDs. It calls for compassion for all. In a society where large corporations make millions of dollars of profit but still layoff employees, it challenges Christians to challenge the norms.

In the Mosaic gleaning laws, land owners were required to leave some of the harvest for those who are otherwise poor and unemployed to glean so they can provide for themselves. The principle here is that capital owners — whether wealthy individuals or businesses — must use some of their profits to provide employment for those who are otherwise economically marginalised.

Would Christian business owners heed such a law? Would Christians lead the way in living out Kingdom values in their respective spheres of influence, particularly in relation to PWDs?

God give us courage. At the end of our lives we will be judged on how we expressed justice, mercy and compassion to the least among us (Matthew 25:31-46). How would you fare?

As a Christian who is also a lawyer, Ronald JJ Wong believes in access to justice for all. Burdened for the common good of society, he advocates for the marginalised and volunteers pro bono for the less privileged. He will be speaking at LuminoCity 2017.
LuminoCity is a 3-day forum that will bring together thought-leaders and disciples in the marketplace for conversations to shape the culture of our day. It will be held from November 3 to 5, 2017, at The Pavilion. Thir.st readers can enjoy a special discount of $50 from now till October 23, and a discount of $40 from October 24 till October 30 with the promo code “THIRSTY”. Visit the LuminoCity website for ticketing information, and follow them on Facebook for updates. 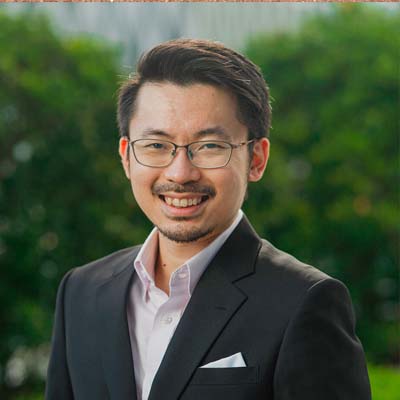