Do you know where these 10 Christmas traditions came from?

It’s the Christmas season! Time for wonderful gifts, cheerful carols and massive trees. But have you ever wondered why we have such traditions during Christmas?

How did seemingly random things like building gingerbread houses and hanging up multi-coloured lights come to be associated with the celebration of the birth of Jesus?

Well, I was curious and went to find out! In the spirit of Christmas giving, I’d like to share this newfound knowledge with you. Did you know long before they became Christmas icons, these cold weather-tolerant trees were used for winter solstice celebrations, as people looked forward to brighter days ahead?

Early Romans would decorate their temples with evergreen boughs to honour Saturn, their god of agriculture. Similarly, ancient Egyptians filled their homes with green palm rushes to symbolise the triumph of life over death.

If Christmas trees are starting to sound pretty pagan, fret not!

The tradition as we know it today has been attributed to German Christians in the 16th century, although how it actually evolved to the version we see today remains unclear.

Some say that it was Martin Luther who first brought a fir tree into the home and placed lighted candles on it (more on that in the next point).

On the Reformation: Why should I care what happened 500 years ago?

Others believe that the modern Christmas tree can be traced back to the popular plays held in Germany about Adam and Eve. The main prop was a paradise tree, a fir tree hung with apples, that represented the Garden of Eden.

These trees were set up in their homes on December 24, when Adam and Eve were commemorated with a feast day. At the same time, they also had a triangular wooden frame that displayed Christmas figurines and was decorated with things like candles and a star.

These two customs combined to form the modern tree in the 16th century, which was popularised in the 1840s when people saw a magazine illustration of Queen Victoria, her German husband and their children around said Christmas decoration.

Regardless of its origins, you can definitely make it about Christ by decking out your tree with characters from the nativity scene or any ornaments that can be conversation starters for the Good News! Now back to the lights and Martin Luther.

Wanting to share this sight with his family, he erected a tree at home and placed lighted candles on its branches.

Another legend states these lights came from the medieval German practice of placing a candle atop a pyramid-shaped wooden frame during this season to symbolise the birth of Christ as the Light of the World.

This was then merged with the Christmas tree tradition as people began to decorate their fir trees with things other than apples.

Light Up Geylang: Meet the folks bringing God’s love to the lorongs

Either way, such fire hazards were turned into safe lights by Edward Johnson, the business associate of Thomas Edison, in 1882.

The American inventor strung 80 hand-wired red, white and blue light bulbs around a revolving Christmas tree by a street-side window in New York City and called a reporter to cover this stunt.

Since it was probably done to sell more lights, this is not too different from today when Christmas lights have evolved beyond tree decor, adorning shopping areas to attract Christmas crowds.

While they may serve commercial purposes, let’s use Christmas lights to remind ourselves that we are to be a light for others and lead them to Christ. A popular idea among Christians is this tradition commemorates the wise men giving presents to Jesus.

However, ancient Romans were already exchanging presents as part of the week-long winter solstice celebrations for the pagan god Saturn, as mentioned earlier.

Once the Roman Empire came under Christian rule by the 4th century, Christian leaders wanted to phase out festivals like Saturnalia, but they knew cancelling it outright would cause backlash.

Hence, they established a rival festival, Christmas, to take its place on December 25. They also carried over a few Saturnalia traditions to placate the public.

So should we stop giving presents? I would say no, as gift-giving provides us with the opportunity to showcase Christian love and generosity to others.

The act can also remind us of how Jesus’ birth was God’s gift to us. Through Him, God displayed His great love and gave us salvation. The real man behind Santa Claus is Saint Nicholas, a 4th century Christian bishop who lived in Myra (modern-day Turkey).

He was remembered for his kindness and generosity towards the needy, with the best-known legend being how he saved three young sisters from slavery by secretly giving them dowries to get married.

His good deeds earned him the title of the patron saint of children, and even a feast day honouring his death anniversary.

When Dutch immigrants moved to New Amsterdam (present-day New York City), they brought along their stories and the gift-giving custom of Saint Nicholas, whom the Dutch called Sinterklaas.

By the 1800s, Sinterklaas evolved to Santa Claus, and the practices associated with his feast day (December 6) were combined with Christmas in countries like America.

The modern Santa may have devolved into a completely fictional character, but we can still use him to share about Saint Nicholas, and inspire others to live godly lives serving others. On the topic of Santa, did you know he had a part to play in normalising red and green as the colours of Christmas?

Some believe the colours originated from the winter solstice celebrations, as ancient Celtics brought red and green holly plants into their homes for good luck and protection.

While this may have contributed to today’s tradition, blue and white were once used as commonly as red and green for Christmas long after it replaced pagan festivals.

What really cemented today’s primary Christmas hues were 1931 Coca-Cola ads. These featured Santa dressed in red, along with green writing and borders.

Thankfully, these colours have been given new meanings in Christianity. Over the years, red has come to symbolise the blood Jesus shed on the Cross for our sins, while green represents Christ’s everlasting life.

One of the best ways to spread Christmas cheer during the holiday season is through Christmas carols.

But did you know that the earliest carols actually had nothing to do with Christianity? They were originally just songs people sang and danced to during various pagan winter festivals.

When early Christians replaced these celebrations with Christmas, hymns found their way into services and carols began to be written for the occasion.

As the first carols were in Latin, they were unpopular since many people couldn’t understand them.

But that changed once nativity plays in the 1200s.

Songs from these plays were mostly in a language audience members could understand. Hence people started singing along, and the carols spread throughout various countries.

Since then, Christmas carols have been a source of joy to everyone who listens.

This December, let’s practise Psalm 95:1-2 by singing with all our hearts to celebrate the birth of our Saviour. Now that we’ve covered the sights and sounds of Christmas, let’s explore the tastes of the season. First up is gingerbread.

Whether eaten as a cookie or used to make edible houses, there are various theories as to why this treat is a Christmas tradition.

Some say gingerbread became popular as eating it during winter helped “warm” people up.

Others believe its medicinal quality of calming stomachs tied it to the season when many would overeat.

But how did it become a Christmas delicacy?

One probable reason is that it was only used for religious purposes up until the 17th century, when gingerbread was finally allowed to be made by the public during Easter and Christmas.

The specific creation of gingerbread men is credited to Queen Elizabeth I, who served these desserts to resemble foreign dignitaries she was expecting.

Gingerbread houses, on the other hand, came from Hansel and Gretel, as the story inspired German bakers to make the witch’s home in the early 1800s.

Here’s a thought: If you’re feeling extra creative, why not be inspired by Jesus’ birth and make gingerbread stables this year? A well-regarded theory is that in 1670, a choirmaster in Cologne gave out sugar sticks to children in order to keep them quiet during a nativity ceremony.

To make the sweets more appropriate for the church setting, he bent them into the shape of a shepherd’s crook.

There is also a dramatic legend regarding how the all-white candy cane came to have red stripes, although many believe this is far-fetched.

It is said that these stripes were a secret code among Christians when they were persecuted in 17th century Germany or England. Three stripes represented the trinity and red symbolised the blood of Christ.

Nonetheless, we can still use the candy cane to point back to the gospel, like how some have already been doing by using the “J” shape to talk about Jesus! The term “Yule” is actually associated with the winter solstice celebrations in Scandinavia and other parts of northern Europe.

The log has roots in pagan rituals when large logs would be burned in the homes of Celtic Brits and Gaelic Europeans as they welcomed the return of the sun.

This ceremony was done in hopes of health and wealth, and it was also believed that the lighting of a yule log would help protect them against evil and misfortune.

However, when Christianity spread throughout Europe in the 4th century, this tradition was adopted for Christmas.

Nowadays, the yule log that most of us are familiar with is most likely the famous Christmas sponge cake filled with chocolate buttercream.

A French creation that dates back to the 19th century, the bûche de Noël recalls the yule log families used to burn throughout the 12 days of Christmas.

Today, we get to enjoy the best of both worlds with modern technology.

The next time you enjoy a log cake or relax to the sounds of a burning log on one of those popular videos online, why not reflect and thank God for every good thing that happened in the past year? Finally, let’s find out why we wish others a “Merry Christmas” instead of using the word “happy” like we do with other holidays.

Turns out, people did use to say both “happy” and “merry”. But “merry” became the word of choice after 1843.

That year, Charles Dickens published his book A Christmas Carol, and the first official Christmas card got printed and sent out. Both the story and card popularised the use of “Merry Christmas” in the English-speaking world since then.

Though technically not all are fond of the greeting. Many from the British upper classes, for example, prefer wishing others a “Happy Christmas” as “merry” brings to mind rowdiness.

In our opinion, what’s more important today is not which phrase you use, but the intent behind it.

When we greet others this Christmas Day, let’s do it with the loving purpose of wishing them overflowing joy as we remember the reason for the season.

While all these earthly traditions are part and parcel of what makes this season feel like Christmas, it’s key that we keep our focus on Christ!

As we commemorate the birth of Jesus, we celebrate God’s boundless love for the world through the gift of His only Son, so that we might be reconciled to Him.

From all of us at Thir.st, Blessed Christmas! 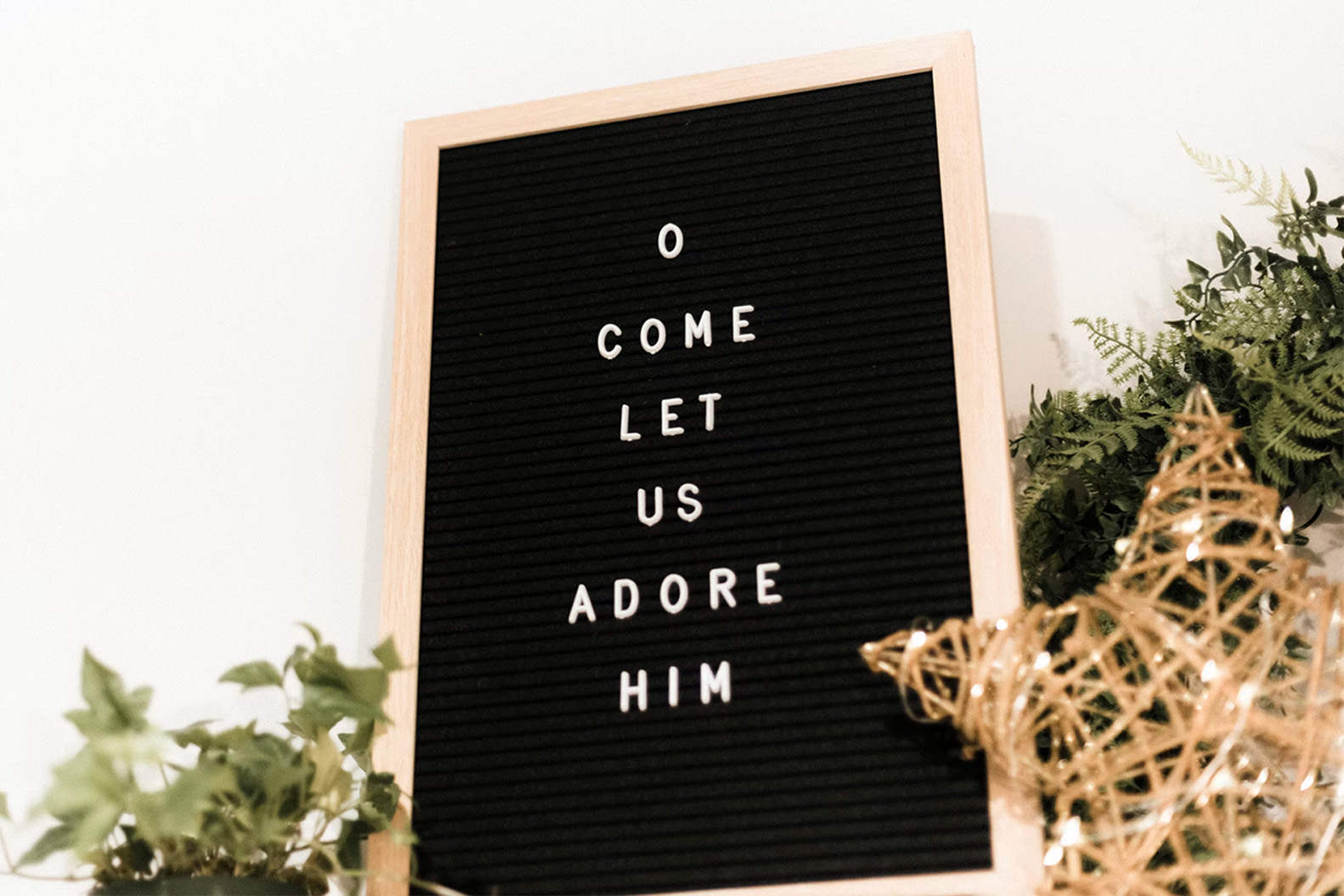