Cryptocurrency: A quick pathway to a flourishing life?

What does a life that’s truly worth living look like? And what will it take to get there?

In this crypto commentary, MAX JEGANATHAN takes a look at the factors that drive the pursuit of the “dream” life, before getting to the heart of humanity and laying out why we’re really here.

Because of its volatile nature, because it is not heavily regulated right now – its value tends to go up and down quickly.

What that means – along with the human heart’s propensity for greed – is that many people flocked to it in order to get rich quick.

And therein lies the problem.

Blockchain technology: Can we really trust it?

Until now, money has always been regulated by governments.

But cryptocurrency is the privatisation of digital currency with money regulated through a shared ledger, blockchain technology.

Interestingly, when we look through human history, ever since there has been money there’s been something else that we’ve all been struggling with – greed.

… if we’re in it just to get rich quick, then we are going to have trouble.

Greed is not new. In fact, Greek philosophers like Aristotle and Plato talked about a concept called pleonexia, which is the human desire to always want more, more, more no matter how much we have.

And we see that pleonexia is just as prevalent today in every human heart, as it was thousands and thousands of years ago.

There may be benefits to cryptocurrency, but if we’re in it just to get rich quick, then we are going to have trouble. The movie, Cool Runnings, has a great line from the coach who’s coaching a team in the Winter Olympics.

He says to his team captain: “A gold medal is a wonderful thing. But if you’re not enough without it, you’ll never be enough with it.

Mark Twain also sets a nice framework to think about this. He said that the two most important days in your life are the day you were born and the day you find out why.

He was linking flourishing not to our own feelings, emotions, achievements and advancements but to purpose.

And this is really important: Everything has a purpose. From a spoon to a surfboard to a computer. Until and unless they are used for their purpose, they won’t be able to flourish.

So it is with you and I and humankind. The question is, what is that purpose?

There is a fascinating conversation in the Bible where Jesus spells it out very clearly.

A religious leader comes and asks Jesus: What is the greatest commandment?

What he’s basically saying is, what’s the meaning of life? What’s the pathway to flourishing? What are we meant to do?

So straightaway, Jesus said our purpose is an outward-facing purpose.

We are inward-facing in our own brokenness but we weren’t made like that.

Interestingly, when Martin Luther King was writing about the word sin, which is a very complicated and ugly word, he said that sin is man and woman turned into themselves.

Sin turns us inward. And greed is a manifestation of that. Whereas generosity, relationship and servitude, are outward-facing virtues and are intrinsic to the Christian life. Now that doesn’t mean we don’t invest in ourselves, be it education or self-improvement.

But we have to understand the only reason for us to invest is to be outward-facing, not just for inward-facing purposes.

It should be about the common good, about other people, about what God has called us to.

And one thing that we know God will never call us to is an inward-facing pleasure and things that ignore other people and build ourselves for our own convenience and comfort.

God is not a God of comfort, He is a God of flourishing.

If you want comfort, freedom and exemption from all suffering, Christianity is not for you.

But God offers something far more beautiful than that.

He offers relationship, hope, flourishing and fulfilment that accords with our purpose.

And our purpose, put in its most simplistic way according to the Christian message, is about relationships.

Our purpose is deeply relational. We are all relational beings.

Crypto crash: A word of caution and comfort for investors

Anyone who’s out there spending time on too much stuff that’s not relational will not be flourishing in the way they were made to flourish.

They might do well in the corporate world, in their investment portfolio – they might be filthy rich.

But there’s always more to flourish in if they are willing to turn upwards and outwards to God and to others.

We need to first understand that we were made to be outward-facing and to be living and breathing and thinking in the interests of others and in keeping with our relationship with God as well.

Only then can the other things like money and material wealth be positive and contribute to our flourishing collaterally, not primarily. 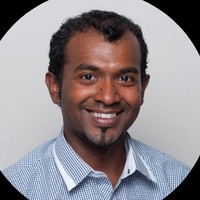 Priyan (Max) Jeganathan is an international speaker and Director of Thinking Faith. He is passionate about helping people make sense of current issues and life's big questions through the lens of the Christian message.