This week, the football world was turned upside down at the news that 12 of Europe’s biggest clubs would break away to form their own league, the European Super League (ESL).

Without frontloading this article too much, one problematic issue was the amount of money these clubs would stand to gain from being in a league of their own, regardless of merit. If you want a few more details, you can catch up with Mothership’s explanation.

All football clubs in Europe have a chance to compete against the best of the best in Europe by rising through their domestic league tables, gaining entrance into the Champions League and knocking out their continental counterparts in that competition.

The ESL was an astounding exercise in inequality and a total affront to the spirit of competition and fair play.

Against that tradition, the ESL would have made it such that invited clubs like Real Madrid and Liverpool would always have a place in the ESL regardless of how poorly they were doing.

Underdog clubs like Leicester City, for instance, who have been making great and respectable strides as a competitive force, would have no chance at someday joining the “big boys” in the ESL.

Compounding the problem, the considerable resources and revenue from taking part in a closed league like the ESL would have gone solely to the big clubs, increasing the financial gap between themselves and smaller clubs.

Suffice to say, the proposed league was an astounding exercise in inequality and a total affront to the spirit of competition and fair play.

I’ve been a massive Arsenal fan for some 20 years.

The night the news that we would join the ESL was announced, I couldn’t sleep. I was up on the Gunners and football subreddits just reading and reading, trying to figure out what it would mean for my club as one of the ESL’s founding members.

Then, when I saw someone post about how Arsenal would stand to gain some 400 million euros just from being a founding member, my eyes widened.

Wow. That’s a lot of money. Finally – we’ll be able to clear the deadwood and get some world-beating players in!

I didn’t even pause to realise the devastating consequences the ESL would bring to smaller clubs and leagues. It was only through the outrage that fellow Gooners better than me expressed that my personal haze cleared up. 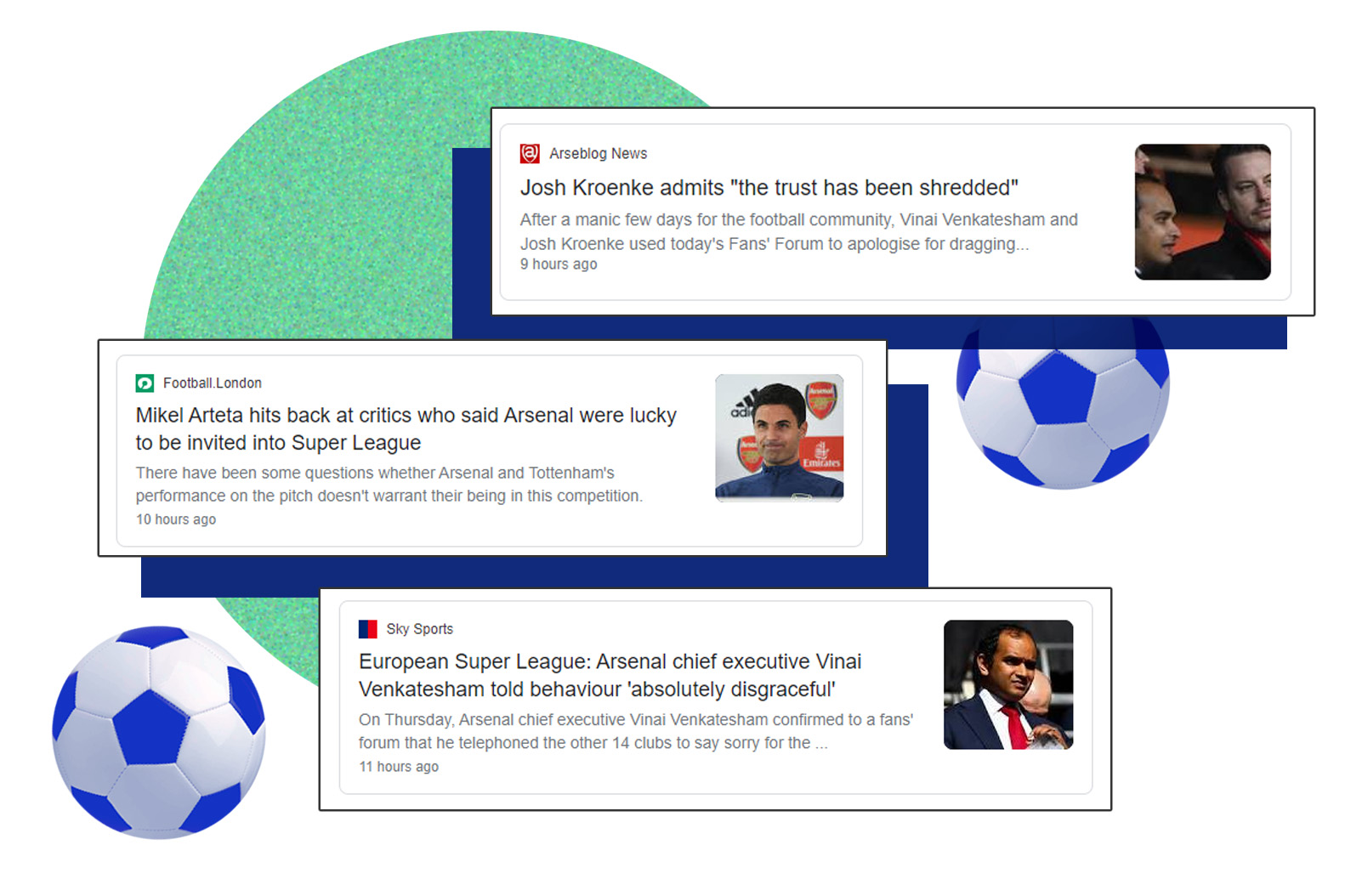 Grassroots football, fair play, competition, being a club that is about its community. All these values the club held dear were being tossed out the window for the sake of greed if the ESL were to happen.

That’s why fans planned to protest outside the Emirates Stadium.

Before legendary coach Arsene Wenger left the club in May 2018 as the longest-serving and most successful manager in Arsenal’s history, he had this to say:

“To all the Arsenal lovers, take care of the values of the club. My love and support forever.”

We obviously haven’t done very well since then, Papa Wengz.

Say what you will about Wenger, but the man is frequently spot on about global football trends. It’s likely why he’s currently FIFA’s Chief of Global Football Development.

We didn’t win a lot, but we did things with values.

Point is, just a while ago, I was a fan who despised the richer clubs for enticing and luring Arsenal’s best players with the promise of better wages and stages to play on.

I celebrated and ardently defended how Wenger optimised our budget-friendly teams after 2004 to become potent competitors in their own right in an unscrupulous footballing world.

We didn’t win a lot, but we did things with values. That was something to be proud of.

And yet when push came to shove, I found myself — like the Arsenal Board — uncharacteristically and hypocritically wanting the club to do whatever it took to be one of the big boys.

The Board called it a “desire to protect Arsenal” and a push for “greater solidarity and financial stability”, but that’s really just PR mumbo-jumbo. It’s all about the money.

That the top 12 clubs would pull something like this tells me that, like the rest of the world, football seems to be losing its way.

ALL ABOUT THE MONEY

Let’s take a step back. Against the backdrop of a world that seems to be increasingly falling apart with each year, football was a sanctum for many like me — an idealistic escape.

Granted, Arsenal’s many defeats through the years have brought me rapidly crashing back to Earth quite often. But, still, the beautiful thing about football is how it allows every fan to dream.

It’s the endless optimism that renews with each new season come September; that faint hope that maybe, just maybe, this might be our year.

And, like clockwork, with each VAR controversy and predictable outcome that buffets the Arsenal, I tend to shed the ideal prospect of a league victory by Christmas, though it’s never prevented me from enjoying the club I love, its values, traditions and history… and the great game itself.

I suppose that’s why the protests against the ESL and against owners like Kroenke, Glazer and Henry have been so great.

The problem is existential itself. What are fans around the world to do if even the pureness and nobility of genuine sporting achievement are so disgracefully discarded by their clubs and caretakers?

We’re losing football as we know it. The Christian in me supposes it’s symptomatic of living in the end times — even sport itself is not exempt from going down the gutter.

To be clear, the Bible does not deride sport. After all, you will find metaphors drawn from races and boxing. We humans just have our ways of sullying noble things.

Think of the insatiable lust for money the game is being increasingly tainted by. Clubs that should have led the footballing world by example turned on a dime and became willing to abandon all that was truly noble about sport — fair play, community, competition — for money.

How much money is enough? If we look at the increasing billions coming in and going out of the sport, I don’t think it’ll ever be enough.

And the more I think about it, if all this game is ever gonna be is about the money, I might simply end up wanting less and less to do with it as the way this money is being used (or wasted) is unconscionable.

And think of verses like 2 Timothy 2:5 (NKJV): “And also if anyone competes in athletics, he is not crowned unless he competes according to the rules.”

I’m a fan of honesty more than the Arsenal, so I’ll just come right out and say that the idea that Arsenal deserves to be playing with the big boys – at this moment in time – is laughable.

We just wanted to compete so that whether we received a drubbing or not, we’d be well reimbursed for it! Rules be damned. Because the points don’t matter, it’s like an episode of Whose Line Is It Anyway, only a lot less funny.

We have made a departure from every definition of the word “sport” – most importantly the Bible’s. Win or lose, I will never stop loving the club I grew up with. But I can’t in good conscience give my heart to it, if it someday goes down a path like it nearly did this week.

Honestly, I’ve been watching a lot less Arsenal in recent years. There was a time I’d watch every game. I’d wake up at 1.55am, 3.45am, 4am – didn’t matter, I’d be there cheering on the boys.

Perhaps that decrease in consumption is related to a shift in priorities as I’ve matured or an increase in my consumption of spiritual things. I don’t know. Maybe.

What I do know is that the last week has been really telling. Seeing so much division and divergence in the football world, I’m reminded of the fact that sport is, at the end of itself, an entertaining pastime.

Millions live for it, but it will still fail at delivering a victory that is eternal. Even at its noblest, it cannot lift communities into the kingdom. It’s not it.

Not to say that sport ever proposed to do those things, but it’s a reminder that only one race truly matters in the grand scheme of things.

It’s not a title race, winning a league for money and prestige. It’s a heavenward one towards God.

And that which does not help me on that path? I might have to go a different way.

Struggling through university, all I saw were D grades