The first month of 2022 is almost up! Have you decided on your goals for this new year?

Goal setting is a great and exciting way to achieve more in life. However the path to actually reaching our goals can be long and bumpy, resulting in us giving up and feeling disappointed.

So what’s the solution to breaking this cycle of making goals but not meeting them each year?

To answer this question, I looked into the Bible and found five characters who achieved their goals. Here are their stories and some steps they took which helped them succeed.

Before you can start working towards your objective, you must first have a clear goal.

Someone who had a specific aim was Abraham. He knew God had promised to multiply his descendants, so finding a wife for his son, Isaac, was a very important matter.

But Abraham didn’t just tell his servant to find any wife for his son. 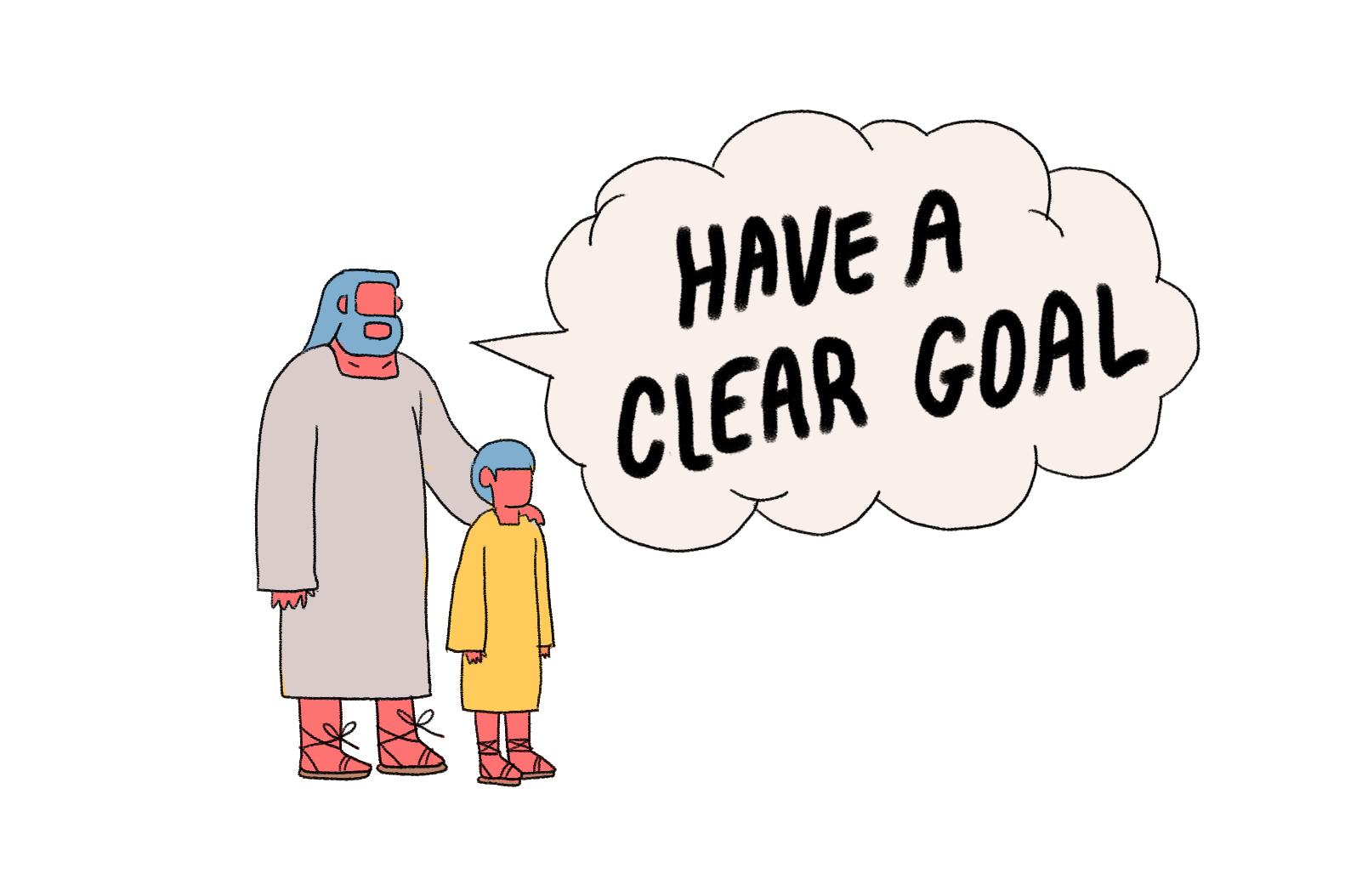 Abraham clearly defined that he did not want a Canaanite for Isaac’s wife, but a suitable woman from his hometown instead.

With this clear mission in mind — and most importantly God’s help and blessing — Abraham’s faithful servant eventually manages to find the ideal wife for Isaac.

5 ways to fail your resolutions fast

By understanding specifically what you want to achieve, you have a greater chance of success. For if your goal is too vague, you may never even know if you’ve accomplished it.

One thing I wish to achieve this year is to improve my fitness. However, instead of setting my goal as “becoming physically fit”, I wrote it down as “become fit enough to jog 2.4km in under 14 minutes”.

The first goal is unmeasurable while the second goal is clear.

I know exactly what I want to accomplish and am looking forward to ticking this goal off my list the moment I achieve it.

Having a clear goal is a great start, but if you want to succeed, you also need to have a plan.

Nehemiah was someone who understood this principle. That is why after he got permission to return to Jerusalem, he could immediately execute the rebuilding plans he had made.

Knowing what he would need for the undertaking, Nehemiah got letters from King Artaxerxes that ensured his safety on the trip and provided his work with timber.

As part of the plan, Nehemiah also obtained first-hand information about the condition of the broken wall, convinced the Jews to start rebuilding it and divided the workload.

In the end, all his planning paid off, as the wall was successfully rebuilt in only 52 days. 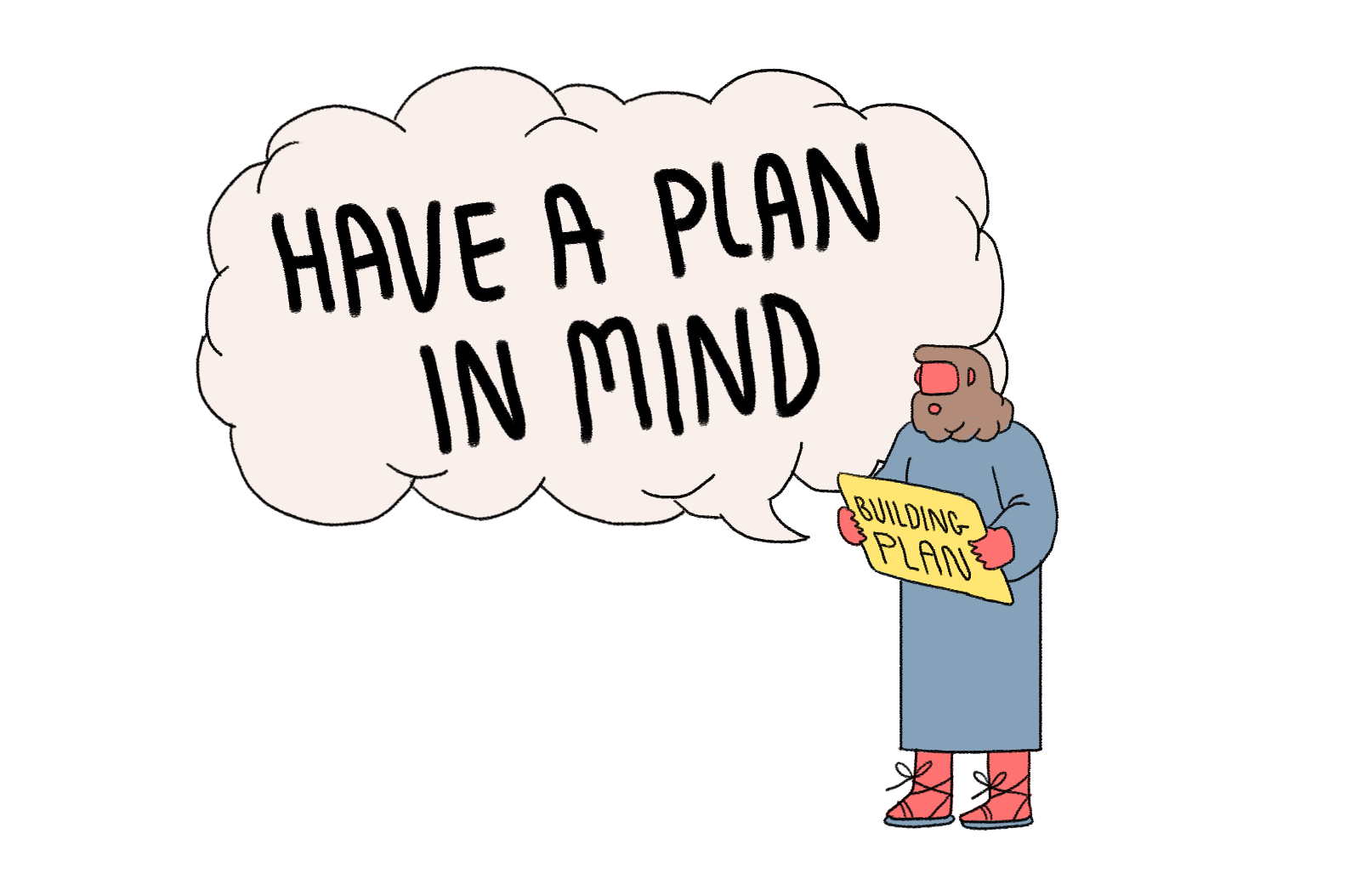 As we can see in Nehemiah’s story, having a plan is like having a map.

It may still have been possible for him to reach his destination (rebuilding the wall) without one, but it would certainly have taken longer and been a lot harder.

One example of this principle applying in my own life was when I wanted to get my friends into table-top role-playing games (TTRPG).

We could have just sat down and played, but if you know anything about TTRPGs, you know that would have resulted in unenjoyable, messy gameplay.

I could only grab their interest by planning out an interesting yet beginner-friendly storyline for our first campaign.

That’s where a plan comes in: having a plan makes it easy to monitor progress towards goals, which helps us stay organised and on schedule.

Going back to the TTRPG example, having a plan I could keep coming back to ensured I knew what had to be done every session.

In addition, since every step in the plan was essentially a mini-goal, I got a confidence boost after completing each one.

Seeing my friends get to roleplay, for example, was a huge tick that spurred me on to keep going till the end of the campaign.

Once you have a specific goal and have planned out the steps to get there, does that mean it’s smooth sailing all the way? Unfortunately no, as there may well be unexpected factors trip you up.

This uncomfortable truth is demonstrated in Jacob’s life, who met a girl named Rachel and made it his goal to marry her.

He came up with a plan to work for Laban, Rachel’s father, for seven years to marry her. He succeeded in this plan.

However, when it was finally time to be married, he was tricked into marrying Rachel’s sister, Leah, instead. For some, carrying out a seven-month plan already sounds too difficult — let alone for seven years!

Despite completing his plan, it seemed like it was all for nothing as Joseph married Leah instead.

I can’t imagine how he felt after such a huge setback. There must have been great disappointment and discouragement.

In your process of reaching your goal, there may be periods where you’ll feel like Jacob.

In such times, here’s a piece of advice that has stuck with me ever since I watched Frozen II: persevere and “do the next right thing”.

You may have lost all motivation and feel like giving up. But in order to achieve your goal, you have to pull yourself together and take the next right step.

That was what Jacob did. When he realised he had been deceived, he confronted Laban. The plan was adapted, and he was ultimately still able to marry Rachel.

Perhaps your “next right thing” is to assess what went wrong or adjust your plan. Whatever it is, once you’ve done it — find the next right step after that and do that.

As long as you keep doing “the next right thing”, you’ll eventually arrive at the final step and reach your goal.

There may also be instances where it’ll be difficult to achieve a goal on your own.

Moses faced this situation: he was camping in the wilderness with the Israelites and resolved himself to settle everyone’s disputes.

When Jethro realised his son-in-law was spread thin like this all day long, he said: “What you are doing is not good. You and these people who come to you will only wear yourselves out” (Exodus 18:17-18).

He then advised Moses to delegate such responsibilities, empowering capable men to serve as judges with him.

Moses listened to Jethro, and was more effective in achieving his goal of leading the Israelites. 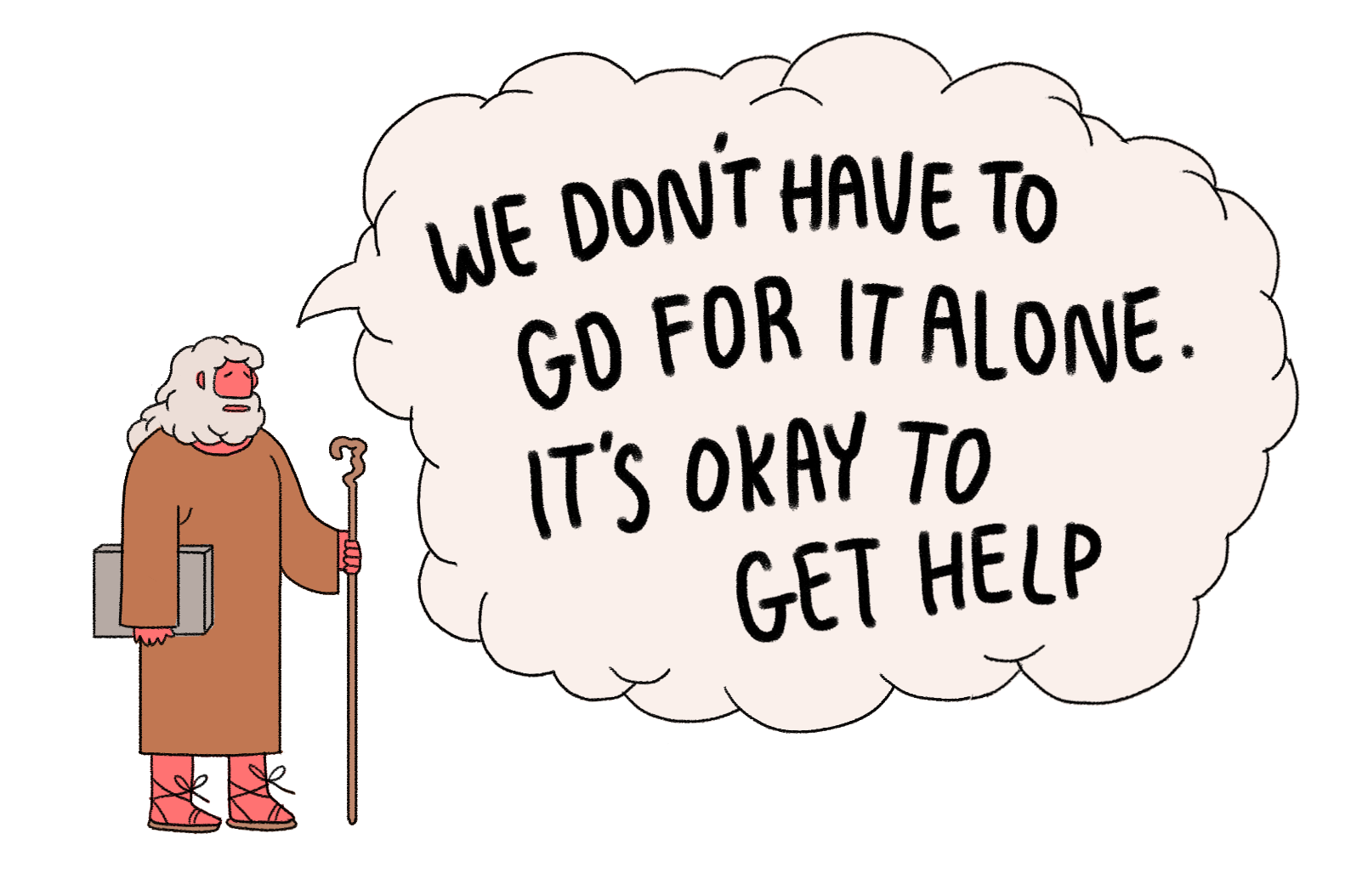 Sometimes, we are so focused on our goal that we forget we don’t have to do it alone.

It’s okay to ask for help. It’s okay to receive that help. Friends and family can support us in our goals by sharing useful knowledge and resources.

Likewise, we can do the same for others.

I want to help someone in need, but don’t know where to start

Importantly, sharing our goals with others also keeps us accountable and committed.

I once had a goal to write a short story and told a friend. It turned out to be more difficult than I thought.

Still, I continued writing chapter after chapter as those friends kept me accountable by asking about my progress periodically, cheering me on and providing encouragement.

So, if you struggle with internal motivation or find it hard to make progress with your goal, remember to reach out to others.

Unfortunately, not everyone has a Jethro in their lives to prevent burnout.

One person who experienced burnout was Elijah. It happened right after his dramatic contest with Baal’s prophets atop Mount Carmel.

He proved that the Lord God was the true God and destroyed every false priest. It was supposed to be a decisive event that turned the nation to God.

However, when queen Jezebel heard about what happened, she sent a message telling Elijah she would kill him.

That was the final straw that broke Elijah. 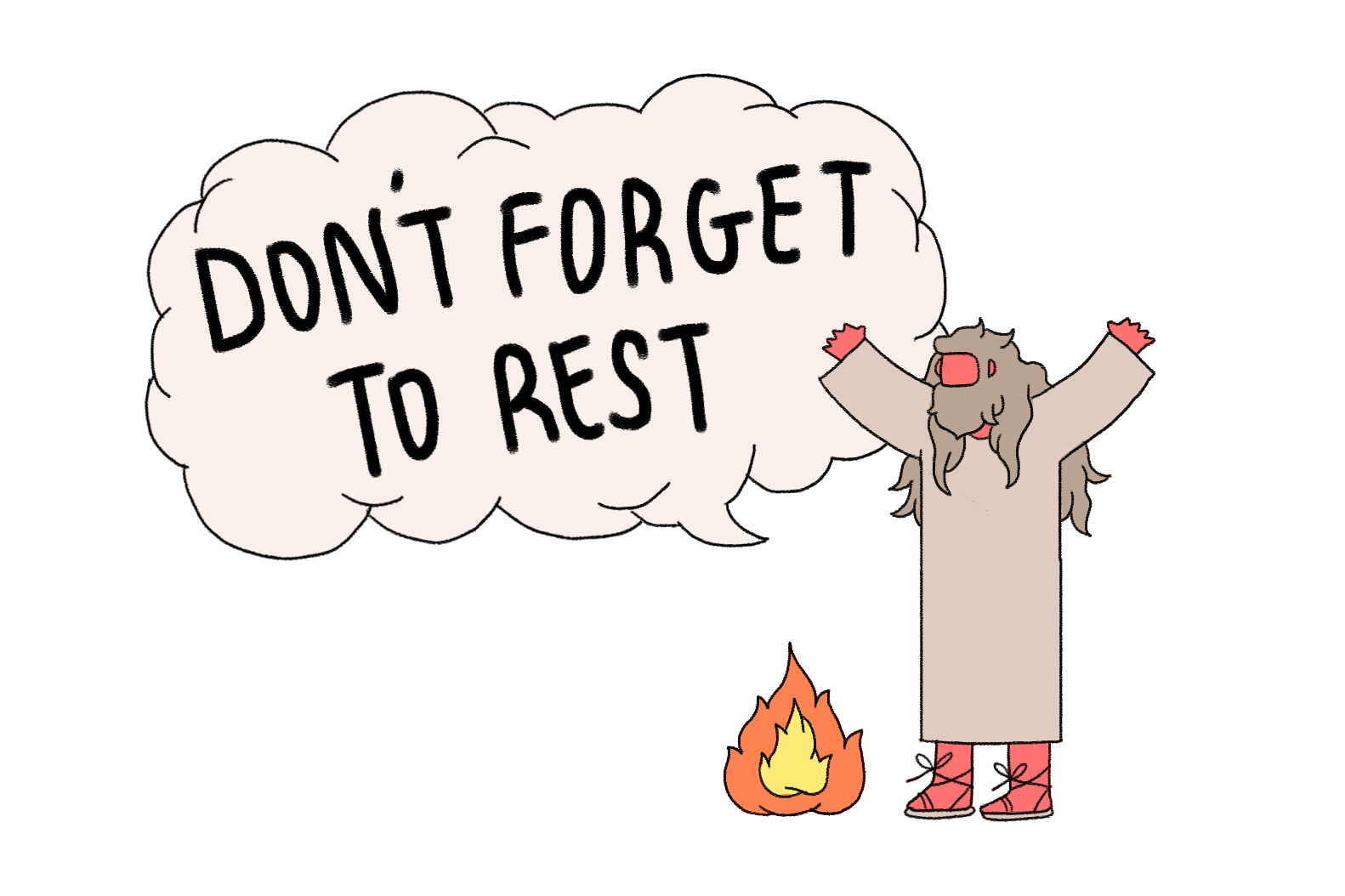 He had been working hard and just when victory seemed to have been won, a new huge obstacle appeared.

What did God do in response? He gave Elijah restful sleep and sent an angel to feed him well (sometimes we just need a nap and a snack!).

As a result, Elijah was able to carry on from that episode and achieve his goal of fulfilling God’s purpose for his life.

I understand the desire to just keep going. I used to work nonstop because I believed breaks were rewards to enjoy only after everything was finished.

The problem was, that only led to me feeling stressed and worn out. I definitely wasn’t productive in such a negative state.

Breaks are not bad. God wants us to rest. That was His purpose in establishing the Sabbath. Jesus made sure to invite His disciples to rest after busy periods.

Hence, make time to rest in God as you pursue what He has set out for you to do. You will then be refreshed instead of burned out and be able to continue towards the objective.

Ultimately, succeeding is important with regards to any goal, since that’s what makes all our hard work worth it.

But while we keep in mind these 5 steps we learned and strive towards our earthly goals, let’s not forget the most important goal for all Christians: “to win the prize for which God has called me heavenward in Christ Jesus” (Philippians 3:14).

That was what Paul was laser-focused on and what should be our priority above any other goals we make.

It’s still only January. If you haven’t already, why not recommit yourself to cultivating a close walk with God this year?

And every year after that, until the day He brings us home.