A marriage involves two people, but a divorce can involve a lot more if you think about the families affected.

In episode three of our new series, Unheard Narratives, we hear from children of divorced families who share their experiences anonymously.

Just note that these stories did not happen to this week’s cast (Esther, Joey, Nehemiah and Shannon) — they’re just four Thir.st readers who joined us to read and respond to these stories we received.

I HAD TO PLAY PRETEND

The first profile was only six years old when her parents got a divorce.

Meanwhile, she became good at pretending that her family was “perfect” because she didn’t want to be judged by her peers.

Because of the divorce, the profile also lived with the mindset that she would never be able to find love, believing that even if she did, the marriage would not last. Even though Nehemiah doesn’t come from a divorced family, he could relate to the profile.

“Growing up, my family was not really the ‘ideal’ family as well,” he revealed.

“So I can kind of relate to her thinking that ‘I’m not going to be able to have a perfect family in the future as well’.”

Shannon had similar sentiments. Coming from a divorced family, she revealed that her mum had a long-term relationship post-divorce, but the guy decided to call it off after seven years.

“That was when I felt, that if my mum doesn’t have a shot two times in a row, then probably it’ll be the same for me,” she said.

Evidently, family backgrounds affect the way we see love and marriage. But that isn’t the only consequence of divorce.

For Joey, who is also a pastor, what stood out to him was how the siblings had to live apart.

“I think that’s always the toughest part of any divorced family,” Joey reflected.

“Their first and closest playmate can’t be with them, and they end up finding other ways to cope with this absence.

In the next story, the profile’s mum decided to up and leave, giving her barely a few days of notice.

She was then left alone to handle her dad and her brother’s shock while still dealing with her own emotions.

The profile also felt like she had failed because she had taken it upon herself to mediate between her parents, but those efforts had failed. The divorce was finalised a year later.

Thankfully, her church was a source of support. Nobody had solutions for her, they were just willing to lend a listening ear.

This was especially evident when her ministry leader continued their regular meet-ups without any ministry agenda, purely just to support her through this difficult period. Shannon agreed that it “sucks” that the children have to be the ones mediating between the adults in the family.

“And then when she asks me if my dad is home and I say that he’s still in jail, she’ll get very angry — very disappointed and she will start lashing out.

“That’s how I start my year, every new year. It just feels like you failed your parents, and you have to take the responsibility to fix everything.”

For Joey, the story gave him the impression that this profile is slightly older than the first.

“Divorce hits people at different ages in a very different way,” he mused.

“We think that just because they are slightly older or like they’re adults, they have a better coping mechanism. But actually, that’s not true.

Thankfully, this profile had a good support system from the church, Esther pointed out.

“The church saw this person more than just someone who serves the church, more than his gifts and what he could bring to the table,” she noted.

“The church saw that he was also a person with needs, and they were so eager to meet his needs in just being there for him, being present.”

Esther also affirmed the profile for being so open in sharing about his or her family circumstances: “For someone who doesn’t know what it feels like to be in a family with open and safe arms, it can feel very alien to them.”

Esther further noted that the desire to fit in with those around us can make it tempting to stay silent rather than show others that you have this “perceived flaw” in a broken family.

“If a friend tells me about their parents’ divorce, I think I would like to give them a hug because it’s so difficult to just not pretend everything’s okay,” she reflected.

Because the divorce happened when our next profile was only three, she only realised that her family was not “normal” when her kindergarten classmate pointed out that she had “no mother” because her mother had never once come to pick her up from school.

With absent parents throughout her formative years, the profile felt overwhelmed and alone, especially because her parents didn’t take the time to explain her circumstances while growing up.

At times, she would lash out and question them why they had her when they weren’t ready to be parents.

Things began to change, however, when she joined a church six years ago. God has since changed the way she views her family.

Her uncle also helped her to understand that it is not her job to fix what’s broken. Instead, she just has to love and forgive.

Hearing this story, Esther was reminded of a recent conversation she had with a friend.

“Sometimes when we see our parents’ marriage not working out the way we think it should, it can be a very instinctive thing to want to change, tweak and make the relationship better,” she shared.

“But a recent conversation with my friend has taught me that what God really wants us to do in those situations is not to overstep our boundaries as children, but to intercede with prayer incessantly, to pray without ceasing for their circumstances.” 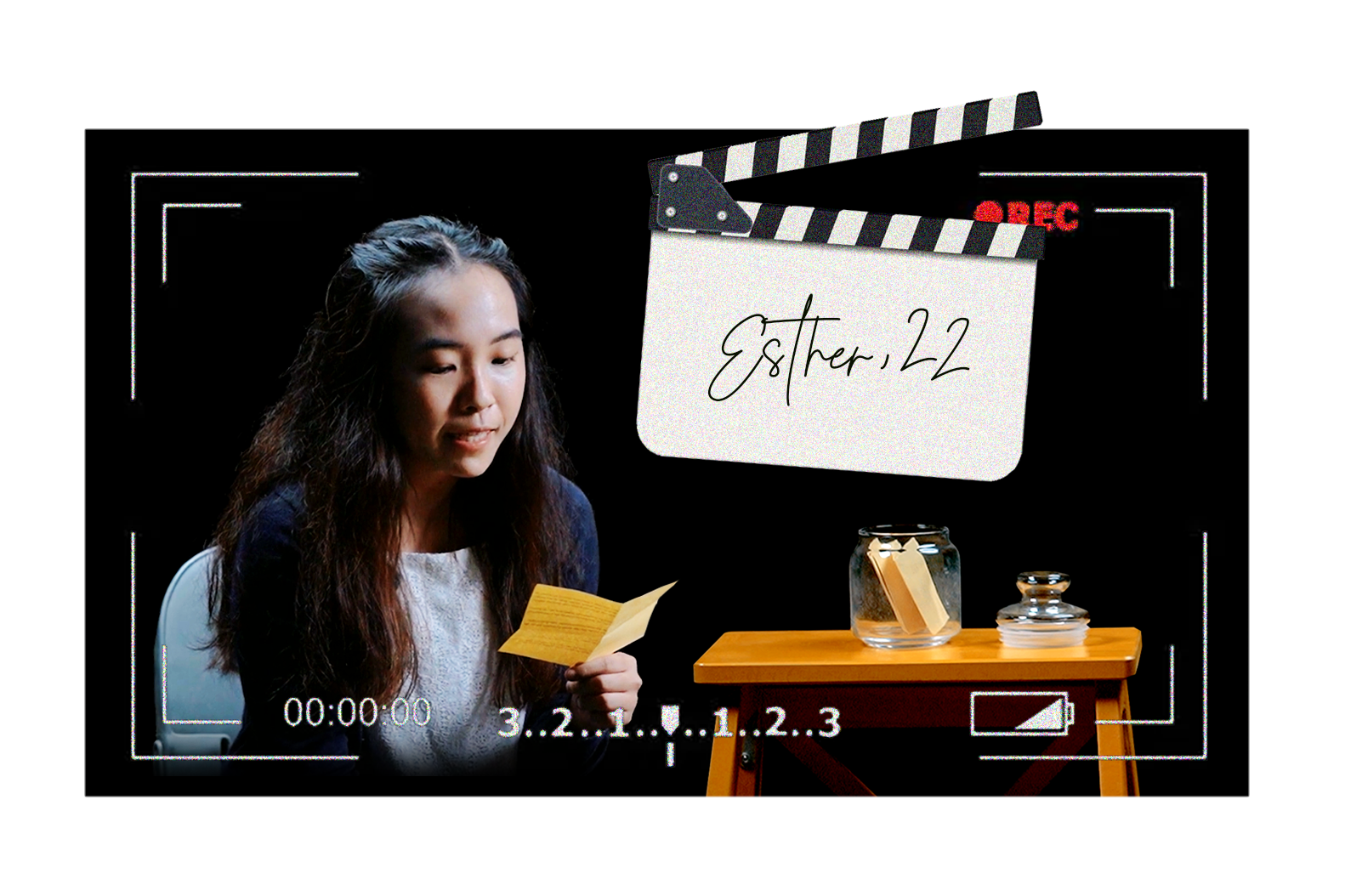 Joey reflected: “I don’t know how easy it is to love and forgive. It sounds like what we are supposed to do, right?

“But it is not so simple to just love and forgive because sometimes we don’t even know what it’s like to be loved and to be forgiven. So how do you give something that you don’t have?”

Addressing the profile directly, Joey encouraged: “I just want to reach out to that person right now and say it’s only been six years. And I want to just encourage the person to take the time to understand love, to understand forgiveness.

THE CHURCH, ANOTHER FAMILY

The last profile touched on her concerns about how others in church see her family.

She wondered if church members think of them as lesser people because her parents remarried. Had they missed God’s standards, unlike the “model couples” that are praised and celebrated in church?

With that said, the profile also recognised that she has a tendency to think this way — in measures and standards — because she herself at times judges others when she hears things about them and views them differently thereafter.

“The fear of judgement was so real,” noted Esther.

While Esther understands that there are standards Christians should live towards, she believes that speaking the truth in love is so much more important.

Asked what speaking truth in love looks like, Esther reflected: “Love speaks slowly, carefully, and in very calculated words. It is considerate of the feelings and responses of others.

“And I think most importantly, love seeks to bring unity instead of strife.” While some may experience judgment in church, Joey believes that the Christian community could also potentially be one of the best things for a child from a divorced family.

Speaking from personal experience, he shared that his parents divorced when he was eight.

Like our first profile, he too was separated from his sister because of the divorce. For a few years, they were rebellious and even got on the wrong side of the law.

“But, by the grace of God, our relatives were praying for us,” shared Joey. “And because of that, I got introduced to my church.”

It was at church where Joey gained “a whole new set of brothers and sisters, and spiritual fathers and mothers”. These people became the family he always wished he had.

Joey conceded that not everybody in church may know how to deal with situations like his.

He noted that every person has unique circumstances, and a tailored approach is required if the church is to care well for those from broken families.

Every person has unique circumstances, and a tailored approach is required if the church is to care well for those from broken families.

Summing up the stories, Nehemiah concluded: “One key thing that was very evident was to be a listening ear.”

“I might not personally understand what you’re going through. But hey, we are here for you,” he encouraged. “We would like to just be here with you and hopefully go through the struggles with you.

“And hopefully one day, we can walk out of it together.”

THIR.ST TALKS: Life as a senior during the pandemic