Breakups are not easy to handle, much less in church where everyone knows everyone.

So how should one react to a breakup? And why are breakups such a taboo topic anyway?

For episode one of our new series, Unheard Narratives, we hear anonymous real-life accounts from folks who have gone through breakups in church.

You may want to watch the above video first for the full stories. Just note that these stories did not happen to this week’s cast (Angie, Cliff, Jeremy and Justine) — they’re just four Thir.st readers who joined us to read and respond to these breakup stories we received.

THE ONE WHERE THE COUPLE WAS ADVISED TO BREAK UP

Some couples might decide to date each other in secret.

In this particular story, the couple was advised to break up when the leader found out about their relationship because they were still schooling. Noting that the leader may have had some insight into the couple’s readiness for a relationship, Jeremy mused: “I feel like it is the couple’s prerogative whether they want to continue with this relationship.

“But whatever it is, I think there should be a degree of support from the cell leader to provide that listening ear or a shoulder to cry on even if he or she knows that it will end up in a breakup.”

After all, some people may simply just need to learn from a breakup, Jeremy pointed out.

“But while advice is wise, sometimes it is the way they’re told that can cause members to think that relationships are bad and are subject to a matter of discussion,” Angie counter-offered.

Cliff added: “Yeah, one of my leaders always told me this statement that I hold to very firmly: good intentions don’t justify bad delivery.”

He went on to explain that no matter how good the intentions of the leader are, when delivered in a wrong way, it would not help the process.

Instead, the delivery has to have a balance between truth and love. And this starts with transparency and trust between both the couple and their leaders.

Addressing the secretive nature of “underground” relationships, Cliff continued: “It’s important to hear everyone out first, to seek to understand and be understood by the other party.”

For leaders, this shouldn’t be a “break means must break” situation. Instead, it’s important to walk the couple through principles, gently pointing out why the relationship may not be good for them at this point in time.

“There needs to be so much more grace,” said Angie in agreement, reflecting that helping the couple to process things would help them to learn as well.

THE ONE WHERE A BREAKUP AFFECTED THE ENTIRE GROUP

While some relationships can end amicably, the post-breakup period poses another issue because of all the other friendships affected.

For this particular couple, while they had parted on good terms, the lack of a congruent explanation caused a misunderstanding among their friends — who started to take sides.

The girl also grew insecure when church leaders avoided talking about the breakup; she felt she had to go the extra mile to prove that she was still capable of serving in church. “I’ve had a few encounters with breakups in the church community,” Cliff shared. “Yeah, it’s really not easy, especially when you’re one whole group of close friends.”

Certainly, a breakup in a close community will strain some friendships within. This isn’t helped by the fact that most people don’t know how to react to breakups in church and end up walking on eggshells around the couple instead.

“I’m guilty of being someone who would make it awkward for a person who just broke up,” Justine admitted.

“It’s not really taught, you know? How are you supposed to respond to people grieving, whether it’s a breakup or a loss? It just becomes awkward.”

Another reason why breakups are awkward? People don’t know if the couple would prefer to talk about it, or if they’d prefer privacy for the time being.

“I believe it takes two hands to clap, in a sense,” Justine continued.

“While yes, the community can definitely do a lot better in supporting youths who’ve gone through breakups, if people walk on eggshells around the topic, it’s also partially because they don’t know how, or don’t know where the couple is at emotionally or mentally.”

As such, she encouraged individuals who have gone through a breakup to initiate conversations with close friends around them about how they would like to discuss this issue.

“If you’re open, it gives us access to you. And it helps us understand where we can come in as a community to support you,” Justine reflected. At the same time, the community needs to learn to hold space for the hurting individual as they process their breakup.

Angie elaborated with an example: “Maybe there are 10 points that need to sink in. Maybe on our first conversation, only point one, two and three sink in.”

Her point was that everyone’s healing journey is different and takes time — we should be patient and gracious in our conversations.

Relating her own experience, Angie shared that she was glad her friends allowed her the time to process her breakup.

“People weren’t very judgy. They weren’t like, ‘You talked about it last week, just get over it.’

“Sometimes, grief takes a while to process.”

THE ONE WHERE EMOTIONAL CHEATING WAS INVOLVED

In one of the stories shared, the guy admitted that he was emotionally involved with another girl despite being attached at that point in time.

While he didn’t act upon his feelings and later confessed this to his then-girlfriend, he came to realise that he was not ready for a relationship.

But because he felt sorry towards his then-girlfriend, he decided not to break up with her until she decided to end things between them one day, before subsequently leaving the church.

“I think something that stood out to me is how his ex felt disconnected from the community and ended up leaving church,” Justine reflected.

“I think this is very real. Relationships can bring you to church, but they can also lead you away from church.” 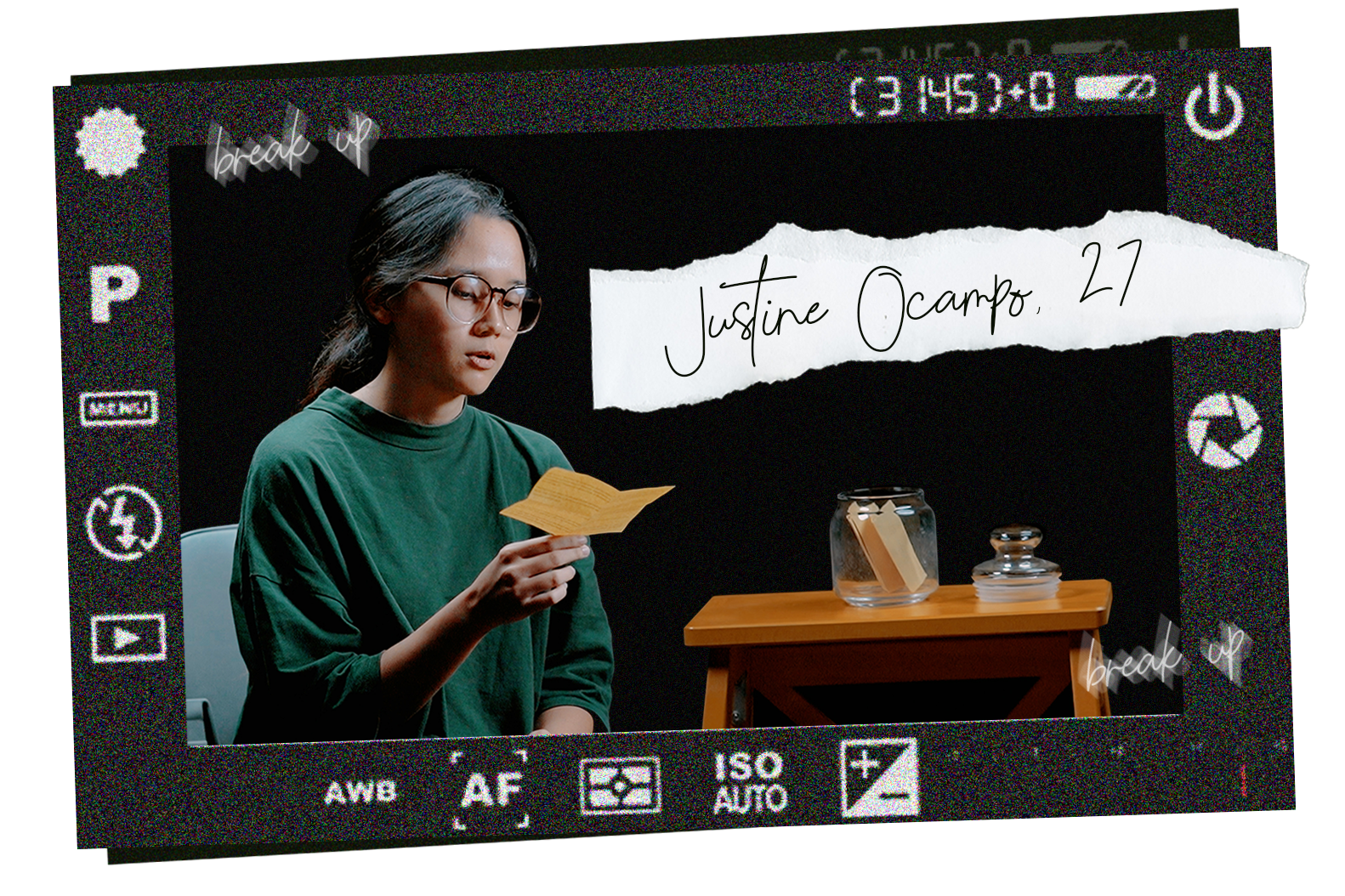 “Honestly, I will understand why it’s difficult to love this person (the guy). And it’s easy to run out of love for this person,” said Jeremy, referring to how the girl might have felt towards her ex.

“That being said, I think that’s when love (for the guy) has to show up in other forms. Love from cell group members, love from cell leaders. Ultimately, church is a place for sinners, not saints.”

Jeremy clarified that he was not absolving the guy of wrongdoing, he is simply suggesting that dating has to be done well.

“In the same way that I think many churches nowadays do premarital classes or premarital counselling, I think churches should spend time also on pre-dating talks.”

This would help youths to understand the point of dating and minimise any hurt they may incur from making uninformed relationship decisions.

“But you don’t want to go through so many relationships to the point that you have so much emotional baggage, and so much less of yourself.”

THE ONE WHERE THEY ALMOST GOT MARRIED

Our final story involves an especially rough breakup: boyfriend suddenly tells girlfriend that their relationship was a mistake despite having already made marriage plans verbally.

What made it worse were the speculation and rumours that surrounded the breakup. Thankfully, the girl had a group of close friends to support her through this tough time.

“This verbal plan of getting married really stands out,” remarked Jeremy. “The goal of dating is to really pursue clarity. And this was not clarity. This was so misleading!”

With that said, Jeremy also highlighted that it was good the girl had friends with whom she could be vulnerable. This is important, as sometimes what people need is just a listening ear.

“It’s very easy to talk about things that go well,” Cliff noted. “But when it’s not well, everyone jumps on it.”

Cliff reflected that conversations that speculate on what went wrong tend to be unproductive and prone to gossip. As such, it is better to exercise discretion and discernment in speaking about this issue.

“The Church has to be a safer space,” he concluded.

Breakups are not the easiest topic to broach, but it doesn’t mean we shouldn’t try or that attempting to do so will necessarily turn out badly.

“I get that it’s awkward to see each other around, especially in church or in school. But I think if dating is done right – when both parties have pursued clarity and they know what they are to each other – breakups could be a positive thing. It could be a journey of growth,” Jeremy reflected.

Justine agreed: “I think there can be a support system encouraging people who go through breakups that there’s beauty in being single as well.”

She also cautioned that reacting poorly to a breakup might send the wrong message that marriage is the be all end all.

“Don’t put other things on a pedestal in the process of grieving alongside a person,” Justine continued. “The loss of a potential marriage or relationship is sad, but it’s okay to also be single.

“That’s something that the Church can also reassure young women and men about.”