These words (John 21:17) reverberated in Figin Seng’s mind as she read about the plight of Singapore’s migrant workers earlier this year. With the sudden eruption of COVID-19 cases in migrant dormitories in early April, workers were immediately placed under complete lockdown and given only a restricted access to food.

Moved by God’s compassion for their brothers in need, Figin and her husband were convicted of the need to obey His prompting and lend a helping hand.

“We realised it was really not about ourselves and our purpose,” she said. “It’s really about God loving them. He just wants them. He just loves them. This is His purpose.”

This sparked the genesis of Bless The Migrant Workers (BMW), a ground-up ministry by a few friends from Covenant Evangelical Free Church (CEFC).

Teaming up with Hope Initiative Alliance to distribute food to workers in three Factory Converted Dorms (FCDs), they later expanded their efforts to provide food to over 1,000 workers spread across five FCDs, 2 worksites and close to 20 residential homes. 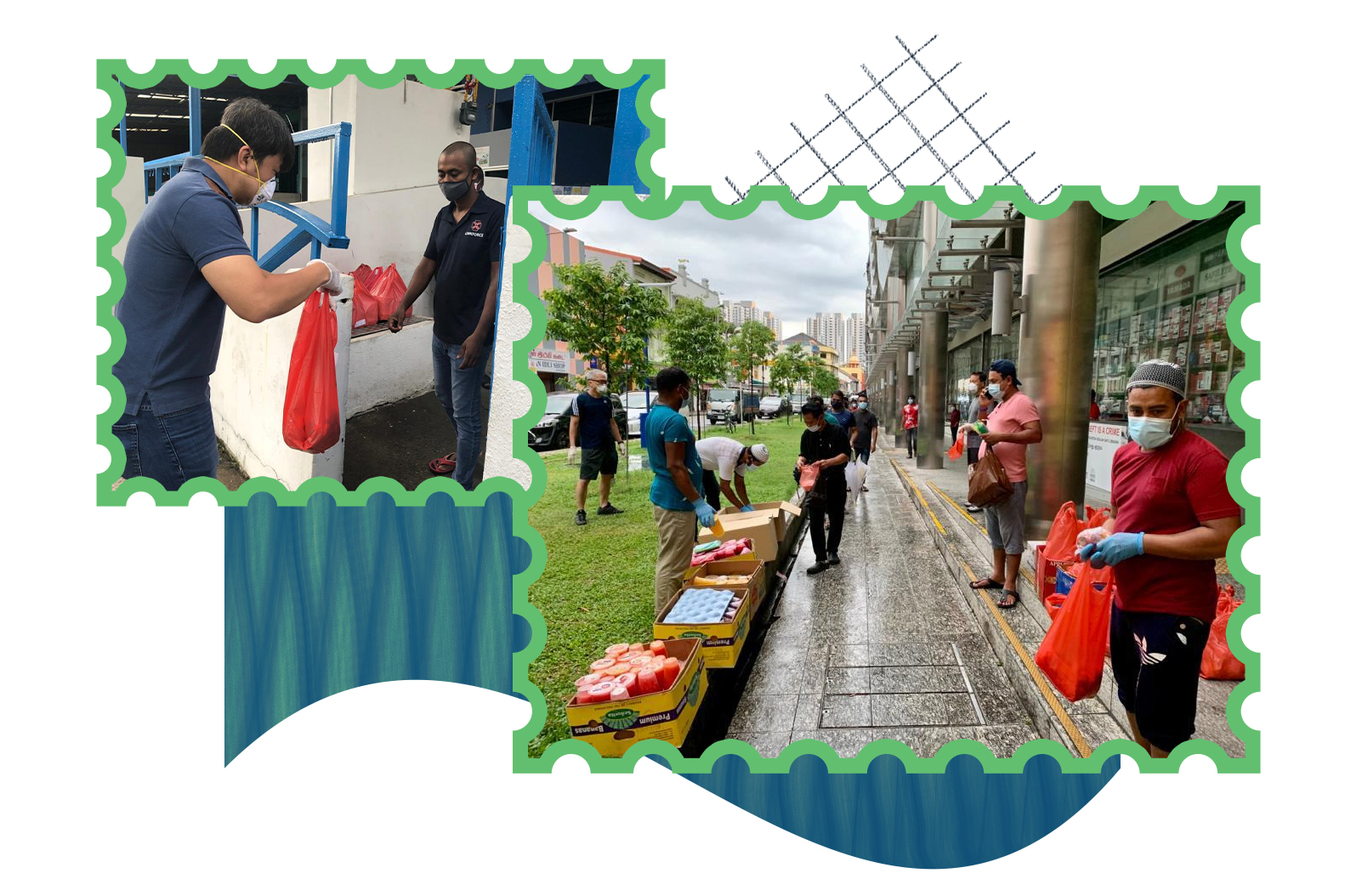 They have also helped displaced workers with no place to stay, collaborating with an NGO working with the homeless as well as church members who offered up rooms in their homes.

Figin points out that the movement has spread far beyond her church. In fact, BMW and HIA have mobilised more than 60 churches under the latter’s Adopt-A-Dorm programme over the last few months.

As she explained: “God’s vision is more than a single church feeding meals. It is a larger vision of seeing churches coming together in unity to provide ‘shelter’ to our migrant workers who live in Singapore and call this place their home.

“This shelter isn’t just about having a roof over them or filling their empty stomach – it is a shelter for their souls.”

A SHELTER FOR SOULS

Indeed as the BMW team started to get more involved with the migrant worker community, they began to encounter needs that went beyond physical sustenance.

They discovered that many of the workers were also going through an especially difficult period of uncertainty, loneliness and stress. Being cooped up in their dorms had severely strained their mental health: They were wracked with worry about what would happen to their families with the suspension of their livelihoods, as well as about catching COVID-19.

Realising that they needed to feed the souls of their brothers in addition to their stomachs, the BMW team organised activities such as English classes, sketching and photography workshops and exercise sessions to compensate for the cessation of physical activities.

They also provided other forms of support for those with more urgent psychological and logistical concerns, establishing a core team of Tamil and Bangladeshi speakers to assist the workers. In addition, befrienders — the name given to those who volunteered to help out with these new initiatives — were equipped with basic counselling skills and served alongside professional counsellors to aid workers who exhibited a worrying degree of emotional stress.

Among the nearly 100 befrienders are Deon Ng, John Tan and Jayne How, three 22-year-olds who have been conducting conversational English lessons with the workers since June. Their involvement with BMW started when Deon and John chanced upon this initiative when looking for ways to serve their church and community.

They started by distributing food to migrant workers in Little India and subsequently roped in their other cell group members – who had been searching for opportunities to serve together – when they started planning activities for the workers.

Deon reflected on how he felt when comparing his situation to the plight of the workers. It didn’t seem right that they were stuck in their dorms while he was “happily cooped up at home, comfortably eating (his) 3 meals and enjoying all the entertainment (he) needed to pass the time”.

“I felt like I needed to do more for God’s people if I wanted to call myself a Christian,” he explained.

Jayne added: “When we found out about the situation in the dorms, the first thing we did was to give money. But their needs really go beyond that. By befriending them, we can remind them that they’re not isolated in this country, and that there are people who actually want to get to know them and be their friend.”

WE’RE MORE ALIKE THAN WE THINK

It seemed like the workers themselves shared Jayne’s sentiment, as it soon became clear that their newfound friends were more interested in making connections than learning English.

“We’d ask them, ‘next week you want to learn what’ and they’d say ‘anything!’ They didn’t have any preference! They came for the calls because there was companionship and they just enjoyed it,” Deon said, laughing.

John shared how his migrant worker friends attended all the English sessions organised by his cell group, even skipping their hotly anticipated dorm movie night to chat with the befrienders over Zoom. “It was very sweet, and it made (our efforts) feel very worth it.”

“Today, they are our friends!” Photo courtesy of Jayne How

Forging these friendships has proven surprisingly easy, too, despite the apparent cultural and physical divide.

As Deon observed: “They’re a lot more similar to us than we think.” For instance, being relatively close in age to one of his new friends, he discovered that they were both raised on similar cartoons like Power Rangers, Tom and Jerry and Mr Bean.

Jayne added that they managed to build quick connections due to the workers’ willingness to open up to the befrienders. “They shared a lot more about their lives, their fears and how they saw the world,” she said.

Such was Figin’s experience as well. “Today, they are our friends! They share their life stories, aspirations and dreams. They show us photos of their families and children.”

One aspiration particularly stood out to her: “One migrant brother told us that after the circuit breaker, he would like to take the MRT with us, since he has not sat on what he has built.”

Through this ministry, the team has witnessed how God provides for His flock. In addition to meeting their material needs, He has sent a groundswell of support for this project.

BMW initially started as a call to action among close contacts, but quickly evolved into a church-wide initiative when CEFC adopted it as part of their mission work. Church members donated both time and money generously, following the example set by their pastors, who also served the migrant workers.

Holding the fort is a group of intercessors who cover the volunteers and leaders in prayer. They are an encouraging reminder that those of us who do not have the time or money to help should not be discouraged — even a simple prayer can go a long way in furthering the work of God!

NOT A PROJECT BUT A RELATIONSHIP

For Figin and her team, BMW has evolved beyond simply being a project with an end date. More importantly, they hope that the volunteers will continue to build relationships with the workers.

“We want to continue engaging churches and sharing ideas and best practices among ourselves so that we can all transit into befriending mode following the clearance of dormitories (of COVID-19),” she said.

While the food distribution scheme has come to an end, BMW is still distributing fresh juices to all the workers in dorms every day.

Even though their English lessons have ended, Deon, John and Jayne have also remained in contact with their migrant worker friends. Their weekly Zoom lessons have morphed into casual catch-ups, and they stay in touch throughout the week via WhatsApp.

The trio say they have no intention of halting these interactions anytime soon and hope to meet up with friends for a biryani meal once the pandemic dies down.

After all, relationships do not have a deadline.

If you have the means and desire to contribute, here are a few ways:

What good can come out of Alzheimer's disease?