Image source: Stills from an interview video with Jolyn unless otherwise stated.

“As a teenager, I wasn’t sure how to find my identity as a person,” confessed Jolyn Kari Ng.

“At that time, it was probably through my friends, how popular I was in school and how attractive I was to the opposite sex.”

Describing it as a confusing period of her life, the search for love and acceptance saw her stumbling into many relationships that did not end well.

And as the cycle of heartbreaks repeated itself, Jolyn began internalising the lie that she was not good enough. It became her truth.

“I really felt worthless – having the desire to be loved and cared for, but searching for it in the wrong places,” she recounted. But these experiences also paved the way for her to find a love that was different from anything she had ever known.

At 15, Jolyn heard about Jesus for the first time and was struck by the reality of God at a youth camp.

“He is a God who knows and loves me. Who would never pretend, lie, change or fail, unlike all the other places where I sought love from,” she described. “How could I not give my life to Him?”

THE FIGHT FOR HER LIFE

But even after accepting Jesus into her life, Jolyn learnt that Christians were not spared from sickness and pain.

Because of all the rejection and brokenness she faced in her younger years, she was still deeply affected by thoughtless remarks. During her late teens, Jolyn started exhibiting signs of mental illness.

Describing what battling depression feels like, she said: “On really difficult days, I longed to cease existing altogether. I laid on the bed with tears running down my face feeling vapid and lifeless. I wanted to shut my eyes and discontinue all life – not that I wanted to die, I just did not want to exist anymore, anywhere, anyhow.

“On better days, I just wanted this earthly life to stop… I wanted to be with Jesus, forever and away from the torment of being on this earth.” 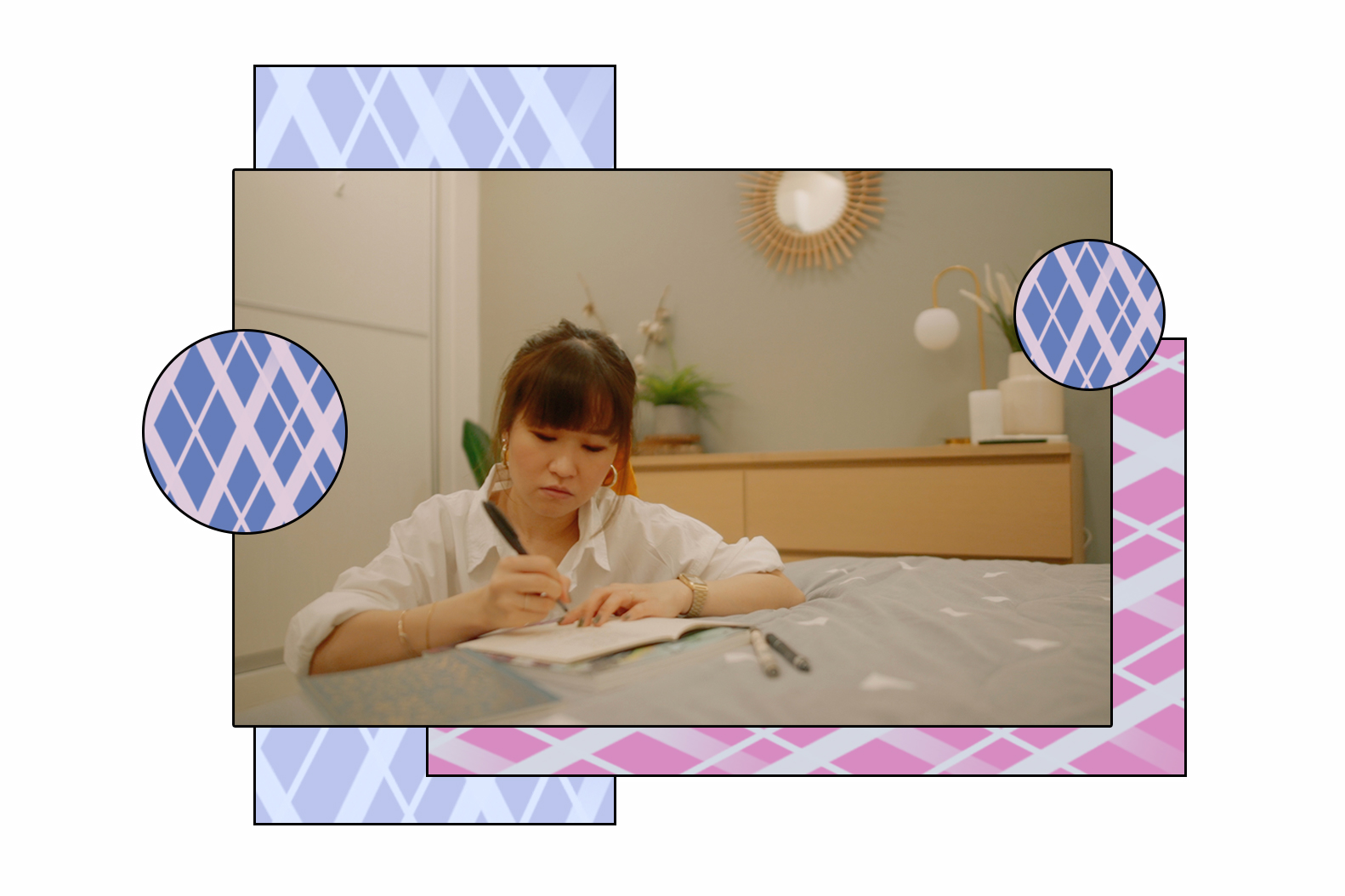 The recovery journey wasn’t easy. For the next one-and-a-half years, Jolyn struggled on a daily basis, until she was advised by a loving friend to seek treatment for her mental health.

What helped was experiencing the care and concern from the people around her. A particularly memorable moment was when a friend reached out to her after hearing about her break-up.

“She called me to ask where I was and told me to stay there because she was coming over to find me. She just came down and sat with me even though I was very lifeless and expressionless,” Jolyn shared.

Initially, Jolyn couldn’t understand why God would allow so much suffering when she was doing her best to follow Him. But slowly, she began to realise that even Christians are not exempted from troubles in life.

After all, God Himself went through the worst pain anyone could imagine.

“I mean if it’s not fair for me, then is it fair for Jesus to die on the cross for people who don’t even acknowledge that He is God?” Jolyn pointed out.

Reading the book of Job in the Bible helped her see things from a new light too.

“When we read the heart-stirring story of Job, we see that the whole purpose of Job’s test would only work if God withholds the ‘why’,” she explained. “Even after the test is over, God keeps Job walking by faith because the answers are still withheld.

And as Jolyn would come to see for herself, God never wastes a single experience.

WHEN HER EYES WERE OPENED

A few years later, she joined the Missions Discipleship Training programme under Operation Mobilisation (OM) to South Africa. It turned out to be the best six months she had – a time that would change the trajectory of her life.

“You’re in a beautiful country. It really gives space to marvel at God’s creation… it’s just eye-opening. You just realise that you’re so small and God is so big,” she described.

“We also learnt more about the struggles of those who are HIV positive, and I even got the chance to take the HIV test.”

Jolyn added: “I got to stay in the mountains in Lesotho for two weeks without clean water or electricity, and visited the churches there. We prayed a lot for the persecuted church and got to hear intimate stories of those who suffer for their faith. All these experiences really started to change my perspective, my heart and my spirit.” As part of her outreach in Africa, Jolyn had the opportunity to spend two weeks in Lesotho, which played a big part in shaping the way she viewed life. Photo courtesy of OM and Shawn Skinner.

Interacting with 60 other people from 15 different nations, Jolyn also experienced first-hand how other Christians in the world lived and served others.

For example, one of her companions never had the privilege to live in her birth country as her parents were missionaries. She also didn’t finish her high school education because she chose to to be an outdoor training instructor.

Hearing such stories challenged Jolyn on her definition on what a successful life looks like.

“I had succumbed to that typical Singaporean mindset of what someone who’s doing well in life looks like,” she admitted. “But what does doing well mean? The only person who can decide that and define that is God Himself.” Living on an international base, Jolyn also learnt a lot from the stories of her teammates. Photo courtesy of OM and Shawn Skinner.

Sharing an analogy, she elaborated: “If your mum asks you to clean your room, your response requires obedience, and you go do it. But God requires one more thing in your response to Him, and that is faith.

“You don’t really need faith to go clean your room, but when God calls you to respond, it always requires faith. It always requires you to put your faith and your trust in who He is, and not what you can do.”

“I left for South Africa because I felt God’s prompting very clearly to go, even if it meant sacrificing things which were important to me at that time,” Jolyn explained, referring to a job promotion that seemed imminent, among other things.

But what she thought was a temporary pause in her career as a graphic designer was in fact a new direction God seemed to be pointing her towards: a life in full-time ministry. Jolyn speaking at a 2018 Passion4Mission Meeting, which was jointly organised by millennials from different missions organisations. Photo courtesy of Jiamin Choo-Fong.

Recalling what she wrote in one of her journal entries when she was in Africa, Jolyn shared these words:

“Now I feel like I am some sort of a crossroad – that I have to decide if I want to answer His call or not. To give up everything, to follow Him, to step into the unknown.

“I know that I could have a life that is predictable, safe, comfortable and familiar. It’s not wrong. I know I can definitely do good in where I already was.

CONFRONTED WITH A TOUGH CHOICE

After returning to Singapore, Jolyn continued to pray about her path ahead, while wrestling with many doubts.

“What would others think of me?” she verbalised. “I wanted to be seen as successful. I wanted to be in control of my own life. I wanted comfort, stable plans, my own right to live the life I wanted.”

“But as Henry Blackaby puts it: ‘Planning is a valuable tool, but it can never become a substitute for God. Our relationship with God is far more important than any planning we can do. We cannot know the when, the where and the how of God’s plan until He tells us. God wants us to follow Him, not just some plan’,” Jolyn quoted. Jolyn giving the valedictorian speech at her graduation from Singapore Bible College’s School of Theology (English) in 2019. Photo courtesy of Jolyn.

After seeking direction and wisdom from her church leaders and mentors, Jolyn decided to turn her sabbatical year into a permanent resignation.

Leaving her full-time job as a graphic designer, she took on a part-time job while figuring out her next course of action.

God also opened a door for her to use her creative gifts to bring the message of hope to others. The 30-year-old now runs her own stationery line, Actspressions, creating artwork and sharing words of truth that we have all been created for a life of meaning and purpose.

As a result, Jolyn has a platform to impact even people outside of her immediate circle of influence. For instance, one customer heard about her battle with mental health and sought her out to speak to the youths in her church.

“This is one way that God has shown me that He didn’t waste my (pain)…” she emphasised.

“I didn’t know how to grieve”: The girl who found purpose in her pain

Looking back at her life experiences, Jolyn encouraged those who are going through a difficult time to continue to trust in God and obey in faith.

She concluded: “You may not see the reason immediately; you may not fully understand why it happened. But we don’t need to understand the why as long as we know the Who.”

Entrust your life to God. You are precious!

Want to be equipped and mentored in missions? Chat with OM at [email protected] You can also explore opportunities for missions by visiting www.sg.om.org.

"I didn’t know how to grieve": The girl who found purpose in her pain