Growing up the youngest of four children, Isaiah Chia, now 20, was used to sitting quietly while his elders talked.

His was “a very typical Asian household” where there was “no culture of communication” anyway. So, conversations did not exactly flow at home.

The fact that his mum was busy at work did not help either.

“It’s not that my mum was unapproachable. I was closer to my mum when I was a child.

“But when I became a teenager, with all the hormones and emotional phases, I started to fight with my mum a lot more,” said Isaiah.

“My secondary school years were a blank for my mum.”

To avoid conflict, he would stay out late with friends.

“The conflicts were painful for me because I knew very well that my mum loves me, and it’s because of that that our fighting cut deep. It would leave me in tears and always frustrated.”

But the less that mother and son communicated, the greater the disconnect. “My secondary school years were a blank for my mum,” he said.

The gulf between them became particularly apparent when Isaiah ended up having lunch with his mother one day and there was largely silence between the two. Neither knew what to say.

“That was what woke me up.”

The inability to connect with his mother bothered him so much that when Isaiah was in polytechnic and needed to create a product or service to tackle a social issue for a module he was taking, he chose to look into this area.

“As my project mates and I researched into the problem of youth mental health, we found that youths suffered deeply from something called subjective loneliness.

“This is a type of loneliness characterised by feeling lonely even though you might be with friends,” explained Isaiah.

The COVID-19 pandemic that has forced people to stay home more may exacerbate this loneliness.

On May 25, FamChamps organised a Zoom seminar on the state of the Singapore family. At the Be.Live Conference, attended by some 600 youths across over 20 educational institutions, participants were asked how often they shared their personal problems with their families.

It was clear that young people have difficulties engaging in authentic conversations where vulnerabilities are shared.

Isaiah’s polytechnic project group, dubbed Vessels, decided to develop something that could help people engage in deep conversations with their family and friends.

They came up with TableTalk by Vessels. The questions-based card game aims to spark intentional conversations and get people to connect at a more meaningful level with those around them. The card game has both conversation topics as well as activities to ensure authentic yet fun connections with family and friends. Screen grab from a video by TableTalk by Vessels.

Said Isaiah: “It is your excuse to have a deeper conversation with your parents. And because it’s a game, it’s a lot less random than spewing intense reflective questions out of nowhere.

“This way, conversations are started. And these are the ones that are so needful.”

The team was able to raise over $11,000 on Kickstarter to fund the production of the game. 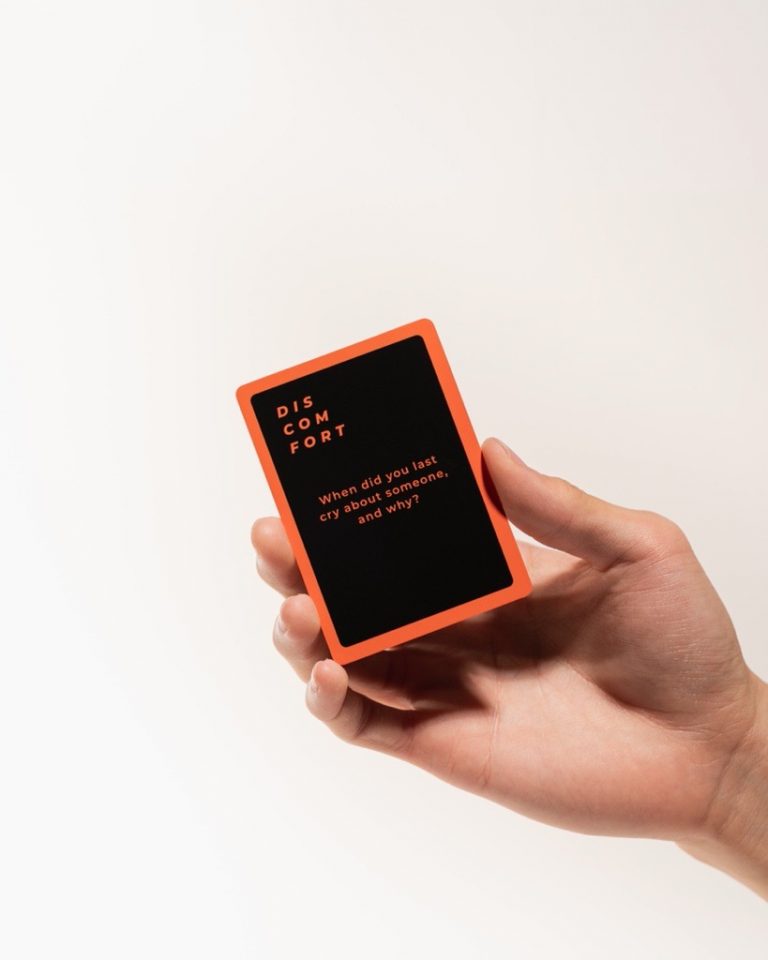 In conjunction with Youth Day last month, a family version of TableTalk has been made available.

Vessels and FamChamps, a student initiative to promote families in Singapore, collaborated to create a digital version of TableTalk for youths to play with their families.

The game can be accessed through Telegram at @FamChampsTableTalk.

To play, click “Draw Card” to get a question to start off the conversation. If the question is not answered, an action card must be drawn. So, this is an activity-based game as well.

The digital family version of TableTalk by Vessels was launched as part of the youth campaign by FamChamps in celebration of Youth Day. Photo courtesy of Focus on the Family Singapore.

Delia Ng, Head of FamChamps, said: “This collaboration with Vessels is a tool for Singaporean families to bond, chat and make memories together.

“We hope that this digital family version of TableTalk will spark a new cultural norm of having fun and meaningful conversations at home.”

Added Isaiah: “I know that many people want to connect or reconnect with their parents but they just don’t know how. And I’m sure it is the same for the parents.

“We hope that by giving both parent and child an ‘excuse’ to talk to each other about certain topics, such as a heartbreak from the past, it will help both parties be more open to sharing vulnerably.”

The digital game is part of the youth campaign launched by FamChamps to celebrate Youth Day.

Entitled On Second Talk, the initiative aims to get youths to give conversations with their families a second chance.

“Isaiah’s story shows us that family relationships are complex and takes effort to build. While we hope that every family can be a place of refuge, it can be a pain point for many youths,” said Delia.

A SECOND CHANCE AT TABLE TALK

As for Isaiah, he has done more than create conversation starters to connect with his mother.

“With the help of my older siblings, we started having little conversations. I also took her out for dinner because I received my first internship pay. That began a process of healing and reconciliation.”

His mother is trying too. After a fight while packing the house during a rather stressful time, she initiated a conversation.

Isaiah said: “It ended up being a really sweet moment for me because she shared the why behind the stress and all that was happening. I got to share why I was stressed out too.

“Listening to her perspective without explaining or justifying made me realise there’s a lot my mum had gone through. There’s a reason why she would say certain things or get triggered at me being angsty or grumpy.

“It was a candid conversation where we didn’t even look each other in the eye. We just sat on the couch, looked forward and shared vulnerably. My attitude towards home changed significantly because of that.”

I struggled with the idea of family for 16 years

That episode has made Isaiah not only keen to share his life but also to learn about his parents’ lives.

“I want to know about their school years or loves and pivotal moments that changed life for them.

“When we learn to step into a vulnerable space, even with our parents, we start to understand and empathise with them better. That way, we don’t see nagging as meaningless anymore.

“We should have that intentional conversation or at least attempt to. Only then will we lay the building blocks for a sweet relationship with our parents. It is a tough challenge but one that would be so fulfilling.”

"You are not what you cannot accomplish": Olympian Yeo Jia Min on dealing with disappointment