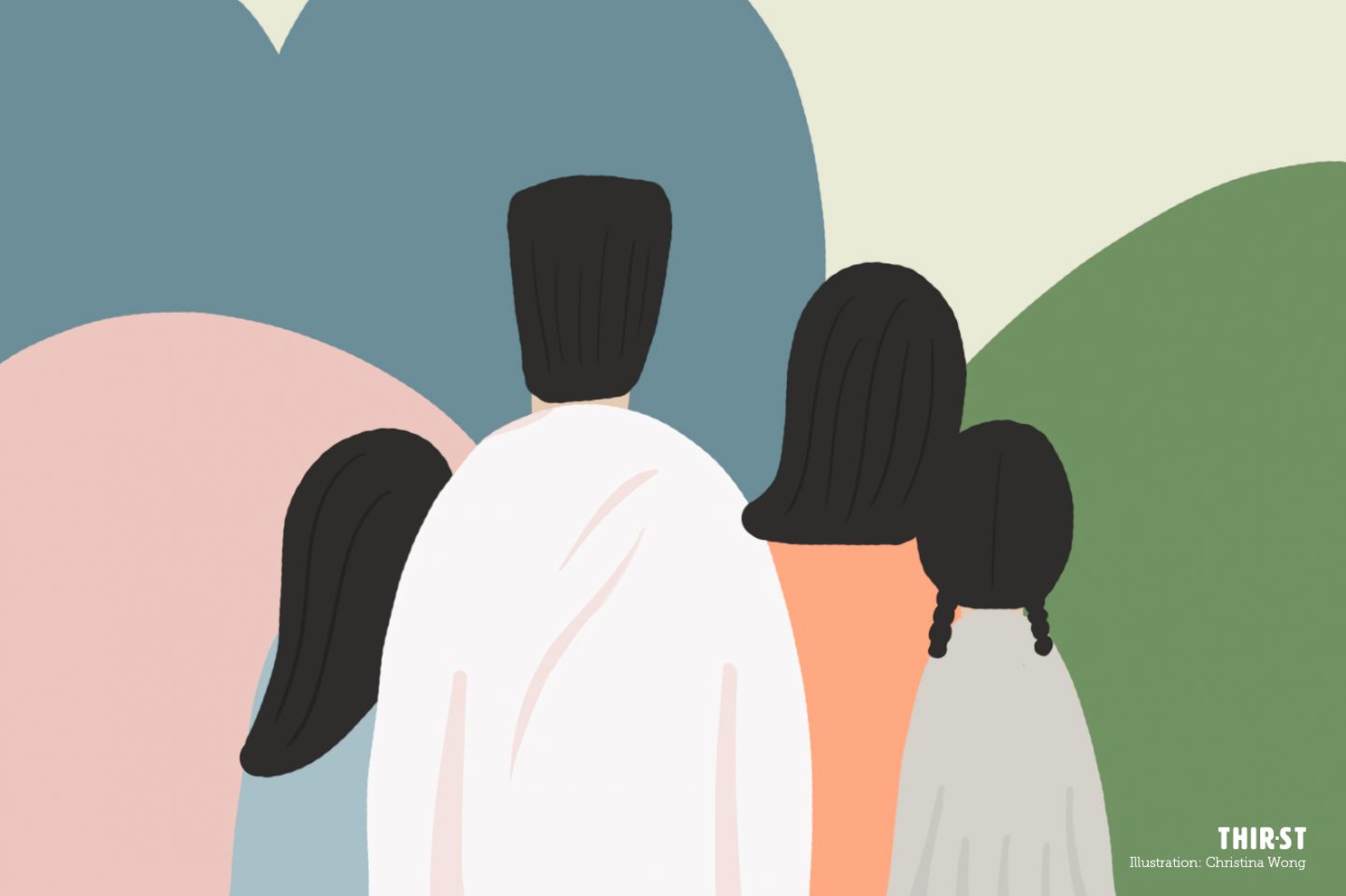 My Kindergarten teacher often encouraged us to draw portraits of our families.

With squiggly lines and less-than-perfect circles, I produced masterpiece after masterpiece to the best of my 6-year-old ability. I don’t remember most of my illustrations, but I do recall one vividly.

It was a picture of my parents, my sister and I. We were on rollerskates, holding hands and looking happy. In the background, I’d placed a Christmas tree.

I have lost that piece of drawing since then, but something transferred from paper to mind and etched itself deeply in my heart.

A complete family is a happy family.

My family is a complete family.

While some of my peers were born into less than desirable circumstances, I grew up with both of my parents present. I never knew what people meant when they said, “I don’t have a dad/mum”, much less the pain and hurt that separation inflicts.

Overtime, “complete” became synonymous with “perfect”. Of course my family wasn’t without flaws – we had our fights and disputes. But we were what you would call pretty normal. Average. Okay. And as I looked at the broken world as a child, okay became good enough a standard. I had both a dad and a mum, and a sister to boot. Okay was perfect.

Until I came to know Christ. That was when I began to understand how love should truly look like.

I can’t adequately put it into words but it was as though I could finally see. Everything became crystal clear yet, at the same time, everything lost its lustre, too. Kinda like putting on a new pair of glasses – you suddenly see everything with fresh clarity, but that also means suddenly seeing every imperfection that was always there.

I recall now hugging my younger sister tightly as we recoiled in fear, angry voices punctuated by threats of divorce reverberating from the next room.

When I came to know Christ, everything became crystal clear yet, at the same time, everything lost its lustre, too. I suddenly saw everything with fresh clarity, but that also meant suddenly seeing every imperfection that was always there.

As we got older, my mom started to rake up the past whenever she got angry. She would throw in snide remarks about how my dad was unpunctual to their wedding whenever we’re running late for something.

Instead of fighting back, my dad would tune out of arguments, block out complaints, and zone out of confrontations. Taking his cue, my sister and I also detached ourselves whenever we felt a storm brewing.

I had stopped communicating with my dad years ago due to a misunderstanding that I thought had caused him to stop loving me. It didn’t help that he was a man of a few words. Our conversations never lasted for more than 10 seconds, and never deeper than a “What do you want to eat?” He was physically present in my life, but never emotionally.

My family had also stopped eating together for years as it was almost impossible to comply with everyone’s schedule. The four of us ate at different times, at different locations.

From the outside, my family seemed okay – perfect. The issues we face weren’t major enough to threaten our family structure, so we simply brushed them aside.

But when God came into my life, His love illuminated the concealed hurts and frustration that undergirded the way we related to each other.

Yes, my family was intact and worry-free.

But it was far from perfect.

I’m not unappreciative of what I have; my family loved each other in the best way we knew how. I know that I’m blessed to have grown up in a relatively functional family, and I’m thankful for that. It’s just that functional isn’t the end point for God. His is a higher standard of love.

“Love is patient, love is kind. It does not envy, it does not boast, it is not proud. It does not dishonour others, it is not self-seeking, it is not easily angered, it keeps no record of wrongs. Love does not delight in evil but rejoices with the truth. It always protects, always trusts, always hopes, always perseveres.

A holy discontentment started to grow in my heart. And while it’s easy to settle for what’s convenient and familiar, I decided that I had to do something, rather than hand down the imperfect love we received, learnt and passed on from generation to generation.

I remember my parents got into a huge argument once, and my dad moved out of their room to sleep in the living room for weeks. Seeing that my dad was giving her the cold treatment, my mum began to vent her frustrations on me.

Functional isn’t the end point for God. His is a higher standard of love.

I resented it. I hated how my mom tried to use me as a pawn to get back at my dad. I hated how they just threw the burden of being a responsible parent to me, when it was not my job to begin with. I hated how I was suffering the brunt of their conflict even though I was just an innocent victim.

I refused to do anything about the situation, refused to be embroiled into their conflict. It’s their fight, not mine, I reasoned. Why should I have to do the dirty work? But I eventually caved because I knew it was the right thing to do.

I remember approaching my dad in the balcony. I asked him if he remembered his marital vows to my mum.

“Papa, you promised to take care of Mummy. I know how naggy Mummy can be, but when J (my sister) and I eventually move out, the primary responsibility lies with you to care for her.”

My dad didn’t say much – simply grunted. But he moved back into the bedroom that night, and their relationship gradually improved.

My family has come a long way since then. Nowadays, we try to be more involved in each other’s lives. We celebrate birthdays and special occasions. We still aren’t perfect, but out of love, we try.

I think back to the picture I drew as a kid – my family in the foreground, and a Christmas tree in the background.

Very much like the circles my little hand had drawn, we were complete, functional, but undeniably imperfect. I’d like to think, however, that God would have received my masterpiece with joy and stuck it on His fridge.

Without allowing Him into every area of my life and placing my family into His hands, I wouldn’t have known what true love is; wouldn’t know how to truly love.

For He is love’s definition through and through.

From medicine to missions: I left the hospital for the field beyond

The places where reactions come from